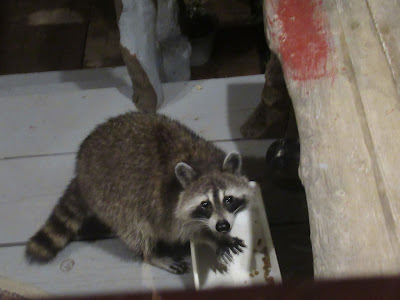 Late in winter when days began to lengthen and the sun grew warmer we realized that a pair of raccoons were becoming regular visitors, A tray of kibble is kept on the front porch for the barn cats, Willis and Sally. Often just after dark we heard the rattle of the tray as the raccoons enjoyed an evening snack. 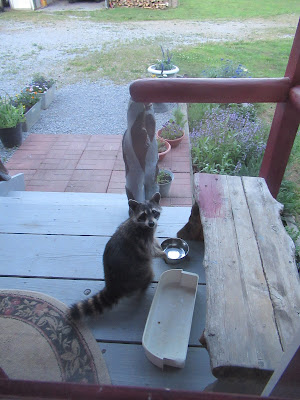 In May it became obvious that Mamma Raccoon was nursing kits.
We began putting out leftovers and scraps of food for her to eat. 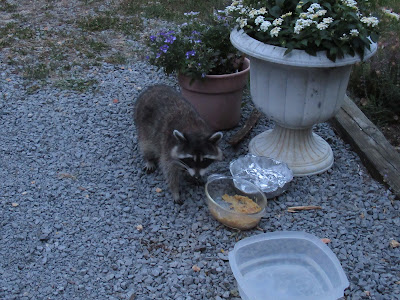 Pappa enjoying stale crackers with milk.
Pappa Raccoon didn't hang around for long. He came in at dusk to eat from the bowls at the foot of the porch stairs, then bumbled off.
Willis-the-cat, who oversees the dooryard and outbuildings, didn't challenge the coons, but kept a strict lookout, sometimes perched on the bench above the porch feeding dishes, sometimes lounging a few yards from the bowls on the gravel.
Once Pappa Coon blundered a bit too close to Willis as he was leaving. Willis smacked him 'upside the head' and sent him on his way. 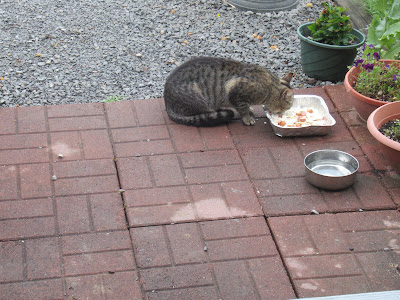 Willis and Sally have also tolerated the furtive forays of two feral cats, Herman and Hector, who seem to have no fixed address and a great fear of humans. 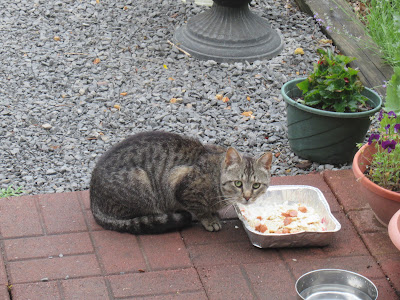 Herman, wary but hungry.
Hector is even more fearful of humans. I've not been able to approach him with a camera. 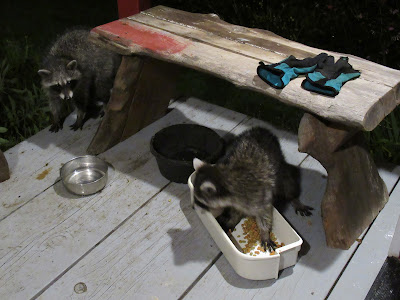 On 23rd June just after dusk, we watched through the window as Mamma Raccoon climbed the porch steps and tucked into the cat kibble.
We opened the door a crack and were surprised when three raccoon 'kits' popped out from under the steps;  in a perfectly choreographed move they lined up, tipped back on their small furry bottoms and clasped their tiny paws in front, uttering twittering bird-like squeaks.
It was easy to imagine that Mamma had brought them along for a first evening venture and likely told them, 'You stay under the porch while I eat; humans are unpredictable and they don't need to see you!'
Mamma bustled down the steps and quickly herded her young ones toward the wooded ravine.
The three babies grew rapidly and soon could make their way up the steps to eat kibble.
While they were small they could easily share the rectangular tray without fussing.
As they gained in size--and appetite--any semblance of mannerly eating was lost.
The kits shoved and squealed, snarled and chattered their teeth menacingly, pushing each other so vigorously that one would tumble down the steps or off the edge of the porch into the raised herb bed, scrambling back up to have another go at the food.
The food tray was sometimes over-turned in the ruckus, the water dish sloshed. 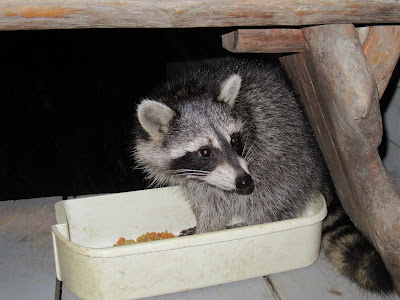 September days are giving way to earlier darkness, there is a chill in the air once the sun tips over the western slope.
The raccoons continue their evening visits but we aren't as often seeing the three kits and their mamma at one time. We suspect that one of the youngsters has emerged as dominant. He [?] is notably greedy, becoming something of a bully. 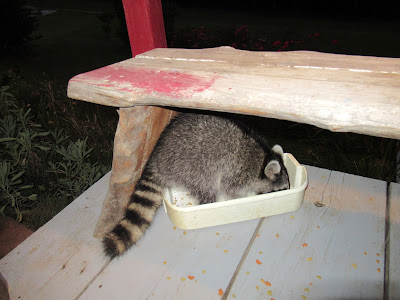 Standing in the dish insures that a sibling can't reach the food. 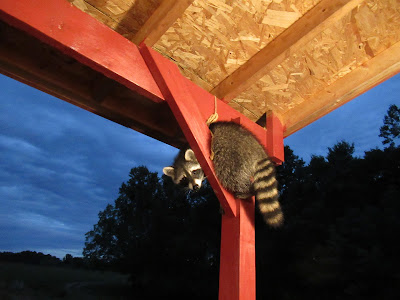 With every last bit of kibble consumed, this bully boy was inspired to show off.
He swung a bit clumsily on the horizontal railing, got a good grip and shimmied up to peer at us from the angle of the bracing. 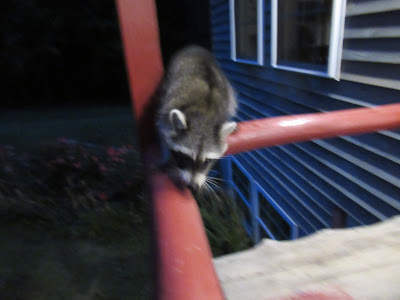 His descent was lacking in grace, and he huddled for a moment getting his bearings before scuttling towards the sanctuary of the woods.
We didn't set out to feed raccoons.
They appeared along with the feral cats and the itinerant opossums.
We've listened to the well-meant warnings about befriending wildlife--the possibility of an 'attacking ' coon.
I think we are suitably wary.
My main concern is for the safety of Willis and Sally, the outdoor cats; at 13 years old neither is in their prime and will become more vulnerable to intruders.
Thus far the raccoons squabble amongst themselves, but ignore the resident cats.
The possums scuttle off at the least sound or movement of humans.
The two feral Tomcats dash in to grab a mouthful of whatever is on offer, then bolt away. We sometimes don't see them for several weeks.
Two years ago it became necessary to live trap and rehome a large male raccoon who repeatedly overturned and uprooted doorstep planters.
If the raccoon population becomes unmanageable we may bundle some of them off to a new life in the wilderness, well away from houses or farms. 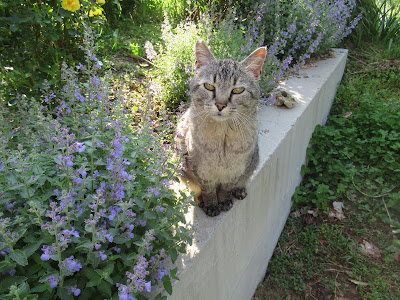 Willis--still very much in charge!
Posted by Morning's Minion at 5:36 PM