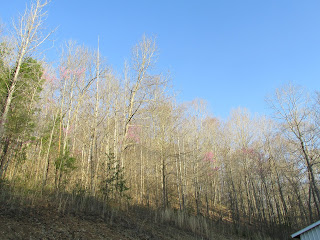 The wind was already kicking up when I rose at 6:15, a restless stirring that increased as the sun climbed into the blue sky.
I fixed my breakfast--a bowl of oatmeal porridge with brown sugar, dried fruit, cream--and carried it to the side porch, pulling a chair to the edge where the sun struck full and warm.
A hawk wheeled high over the ridge, gliding through the rushing air, harsh cries of 'Peent, peent,' sending a flurry of small birds to shelter on the branches of a pine. 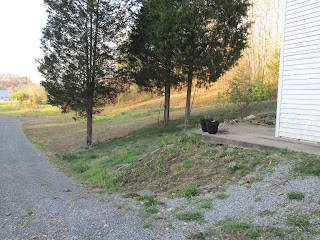 Breakfast done, I made my rounds, checking the daylilies transplanted into the slope below the side porch landing. 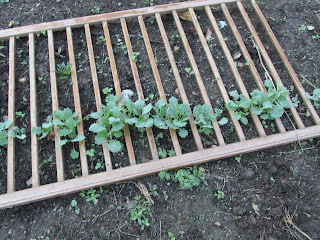 A first crop of kale is thriving. The cats are determined to dig in any freshly turned soil, disrupting tiny seedlings, so I found this side from a child's crib, [left behind by the former owners] and used it as a barricade. 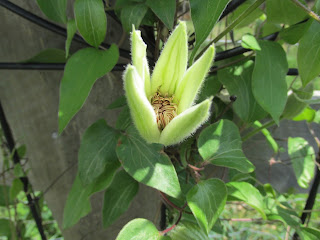 The first bud of Clematis Candida, more green than white. 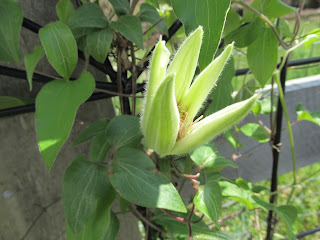 Moved as a small rooted slip from our first Kentucky house, Candida is coming into her own this season. 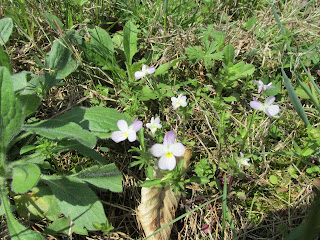 In the rough grass along the lane tiny wild violas are in bloom.

I spent more than an hour weeding around the side porch steps, grubbing up tenacious things that seem to thrive in the gravely soil.
A quick break before noon, then out to see what can be salvaged in the perennial strips.
I lost some plants to the endless wet and humid summer of 2016. Several clumps of veronica which seemed to have disappeared have now been freed; I found that the dwarf Oriental lilies are thriving and there are tiny self-sown foxgloves growing beneath the spreading branches of the nameless rose.

My knees began to protest, but I kept on for another half hour.  When I finally creaked into the house for lunch I was surprised to find it was late afternoon.
With Jim away I am enjoying lighter meals: for my late 'lunch' a salad with lettuce, tangy/sweet 'grape' tomatoes, cucumber, a whole avocado; fresh asparagus, a toasted bagel with homemade pimento cheese. 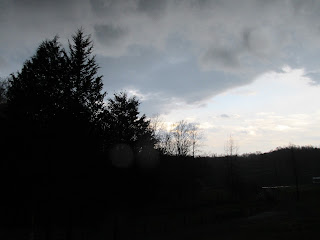 I had planned to drive into town for a study meeting at church, but when I sat down at the computer I learned that our area was under a tornado watch.
As I washed my dishes and tidied the kitchen, the wind outside increased to a noisy whine.
The sky darkened and thunder rumbled.
The storm watch was upgraded to a 'warning.'
Above the skirl of wind came the intermittent hoots of a siren, from the firehouse station a mile away.
Bobby Mac, who is terrified of storms, fled to his usual refuge, wedging himself along-side the laundry basket in the downstairs bathroom.
Standing on the front porch I heard the booming roar of the wind surging above the ridge. 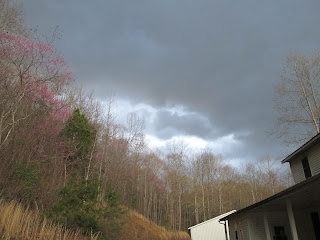 Between intervals of rain the world took on the eerie greenish hue that inspires anxiety in the heart of those who watch a storm's progress. 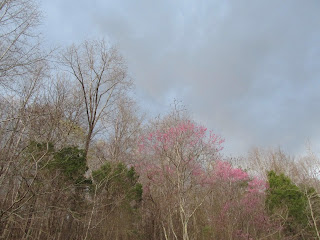 The sky to the northeast was black and roiling.
Patches of slate blue appeared, quickly obliterated by dark clouds. 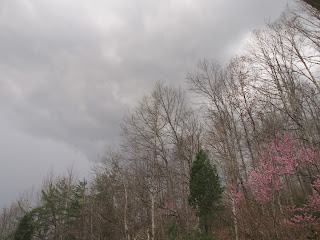 The storm churned about.  A moment or two of stillness, trees unmoving, a dense quiet, then again a fury of wind and slashing rain. 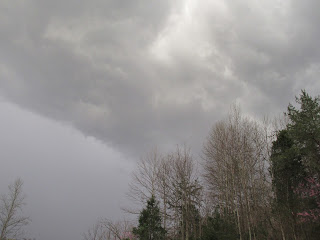 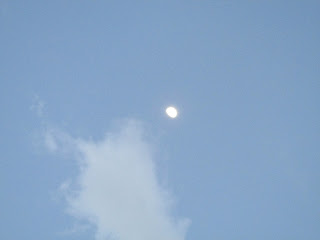 At dusk the half moon appeared in a patch of blue overhead. 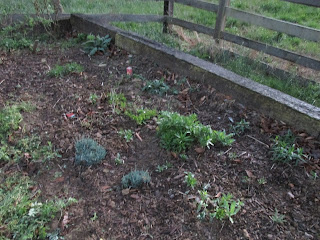 I walked across the drive to observe the bit of garden I weeded earlier. 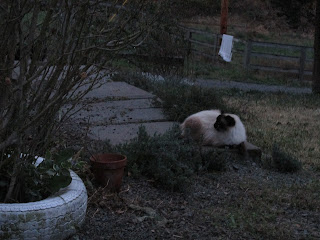 Charlie-cat crouched on the side steps, unfazed by the storm.
Now at a bit past 10 pm I've made a last inspection of the weather. The thunder has ceased, rain drips quietly from the eaves. The thermometer has dropped to 58 F.
I will want a fire in the morning.
The most recent post from the local weather station is reassuring: 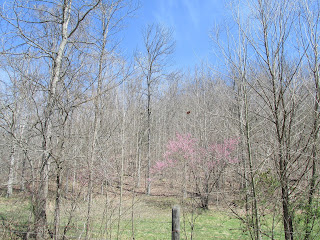 Kentucky spring weather continues to be capricious.
These photos are from Sunday--a lovely day to be outside.
Change is noticeable each day--the shimmer of emerging leaves in myriad shades of green, or in the case of the maples, having distinctive rosy sheen. 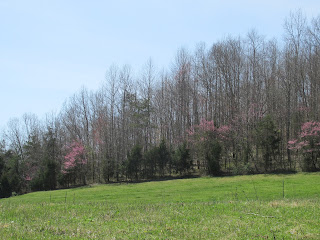 I invented reasons to be outside--tidbits to be taken to the barn cats, the return of a jar which had held goats' milk, scraps to be tossed on what I call the 'compost pile.' 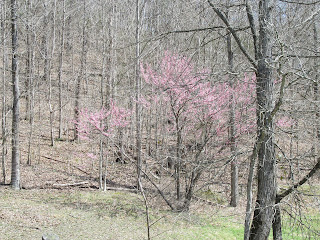 The redbuds have their glory days, providing flamboyant color after winter's somber hues. 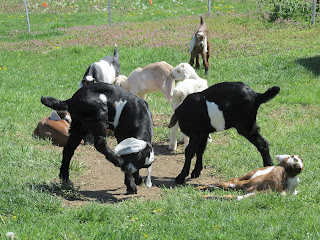 I could endlessly watch the baby goats. 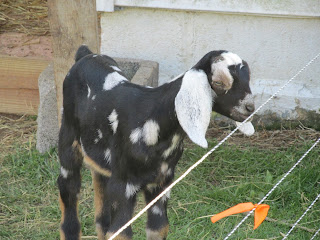 Isn't she cute?
Her nose is dangerously close to the electric fence which B. put up to confine the little ones to their grassy area off the back entry which served the Amish owners as their wash house.  A small roofed area has been converted to a straw-lined bed where a heat lamp glows through the night. 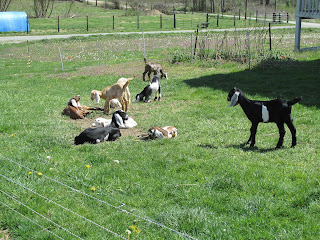 The youngest goats--triplet doelings--were brought out for the first time. They were quick to realize that they had space to caper and run.
Inevitably, the baby goats must learn that contact with the electric fence is unpleasant. When an inquisitive nose touches the wire, or an airy leap brings a small hoof in contact, the kid yelps and bounces away, quickly developing a healthy wariness.

Not so with one of the little does. At her first 'bite' from the fence she flung herself into it rather than away, thrusting right through the four strands of wire, then, compounding her misery, turned and bolted back through, bleating piteously.
She repeated this maneuver three times, crying.
F. climbed into the pen, cornered her and held her against his chest until she quieted.  When he set her on the grass she was ready to play.
The baby goats love attention and there is always the possibility that a human approaching the pen may be bringing their food.
Until they are all more wary of the fence I've tried to admire them from a little distance not wanting to see them jostle each other against the wires. 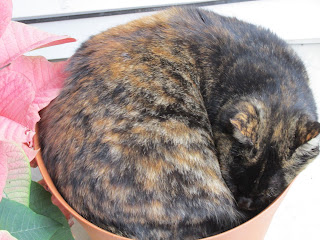 Sally, who has developed an 'attitude,' is determined to nap in large plant pots.
I intend to take out some plastic cutlery to poke into the soil as deterrents.

I tore myself away from the goats and decided I was ready to tackle some gardening chores, although I'm still favoring my back a bit.
The rugosas planted by my predecessor have put out yet more runners where they are not wanted.
I grubbed with a shovel, trying to follow the stout stems back to the mother plant. I found several sturdy volunteers had emerged in crevices between the concrete steps. Even a small length of woody stem left behind is capable of generating another bush or two.
I scraped out places in the gravely soil of the steep bank behind the retaining wall and poked the largest of the shoots into the ground. Several transplanted there a year ago have taken root.
The roses are pretty and sweet-scented and can do no harm if they should spread along the side hill.
Keeping the remaining ones within bounds will mean continuing vigilance.

I climbed the fence into the pasture where I had hastily interred a clump of double orange daylilies 2 years ago. I divided the roots and set them out below the concrete landing at the foot of the side porch steps. The creeping phlox which bloomed there during our first spring in residence has 'died out' allowing dandelion and other weedy things to flourish.  Knowing that 'ditch lilies,' as they are locally called, can multiply and bloom in adverse situations, this seems a likely place for them.
I rummaged out some plastic containers and planted a few seeds: tomato, muskmelon, viola, achillea. These are in the east facing windows of the sunroom and pantry.
A few viola have pricked through the surface of the soil and one venturesome muskmelon has poked up a sturdy loop of green stem.
Four packets of seeds arrived in yesterday's mail: two additional varieties of achillea that I covet, a pink butterfly weed [asclepias incarnata] and Camelot foxglove.
I shall no doubt once more over whelm myself with plants!
I have asked my daughter to be alert to any large planting containers that may appear on the yard sale circuit.
It was nearly dark when I gave up and creaked inside for a hot shower and a comforting mug of tea. 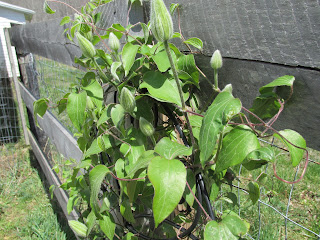 Clematis Candida has more than a dozen buds.
Rainy days and chilly nights are predicted for later in the week.
Exasperating--we had spring in February and now a relapse!