To Blog Again--Or Not? 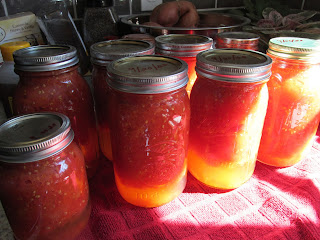 It has been a busy summer.
Even as I type the words I'm thinking that summer has always been busy time!
Planting, harvesting, preserving the harvest--as well as doing the usual tasks indoors and out.
[To say nothing of the building/renovating projects that have been an on-going lifestyle for many years!]
Dawn and I have picked green beans under searing sun, brought them in to snip, steam and seal in the vacuum Food Saver.
We have unhappily thrown out tomatoes ruined by blight or bugs; those worth salvaging have been canned or turned into salsa and spaghetti sauce. 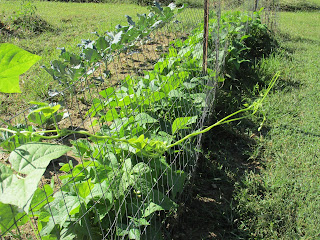 I drove to my favorite garden nursery in mid-August, returning with broccoli, Napa cabbage and regular green cabbage to set out where earlier beets and cucumbers had grown.
I watered the plants for several days before a spell of rain took over.  All are growing on nicely.
In the foreground of the above photo is the late crop of green beans.  I planted bush type, but a few of the climbers germinated from the earlier planting--overgrown pods discarded on the ground as we picked. 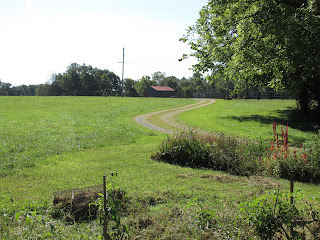 Late August rains have blessed us with a green autumn. Leaves on a few trees are starting now to 'turn'--hickories going a golden russet; one branch on a large sycamore across the lane has a warm tint of yellow.
Hummingbirds are still a presence at the feeders. 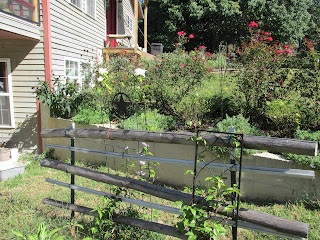 Clematis have flowered again--other than the always struggling one that I inadvertently dislodged while tugging on a clump of grass.
Clematis stems are so vulnerable! 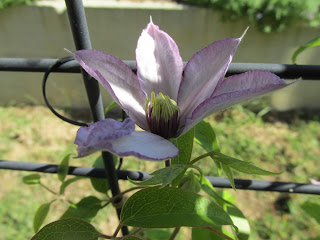 Clematis 'Samaritan Jo'
In truth, it isn't busyness alone which halted my blog posts. Online resources indicate that the new blogger format has been prone to spam 'hits.'
I can deal with the odd irrelevant comment or those who comment only hoping to make a sales pitch.
I cringe at pornographic filth--posts of explicit content from those nameless trolls who have the expertise to get around comment moderation and spew their filth.
Although I try to recognize and quickly delete, my reading skills have always been of the kind which register whole paragraphs in a quick glimpse.
When dealing with comments on my only August post, I was using my laptop, working at Howard and Dawn's house during the 8 days that our internet was down.
I'm awkward with the laptop touch pad, and I suspect that I deleted some legitimate comments along with the spam.
I miss blogging--sharing photos and words that journal our days and seasons.
I can hope that 'blogger' deals with the issue--building a system that filters out the professional trolls!
Posted by Morning's Minion at 9:35 PM 14 comments: