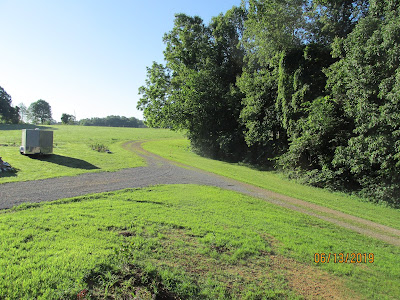 At the beginning of the week just past, storms moved through, brief but rather fierce batterings of rain borne on wind, echoing with crashes of thunder.
Mid-week the skies cleared, humidity vanished, nights were crisply chill.
Cool, sweet-smelling currents of air stirred the curtains at my open bedroom window, causing me to appreciate the quilt on my bed.
Warm shirts and jackets, put away for summer, were brought out again, the A/C unit allowed to languish for several days.
Such weather in June was not unusual in my home state, Vermont.
June as experienced in Kentucky is more likely to have the feel of high summer, temperatures edging toward 90 F, humidity swathing us in dampness. 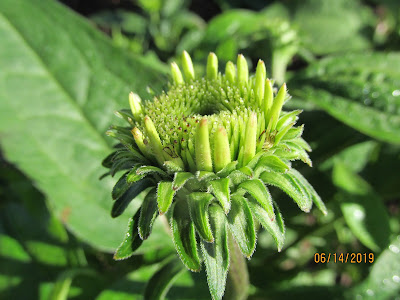 Coneflower in bud, one of several moved from my garden at the farm.

The garden visibly flourished, refreshed by rain, stimulated by sunshine. 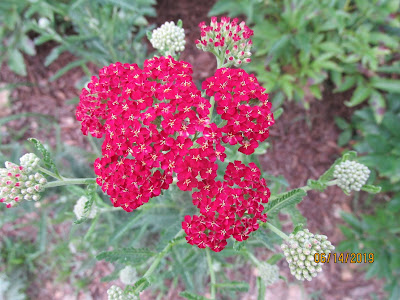 A favorite achillea, also moved from the farm.  It was purchased with birthday money from my sister Margaret. 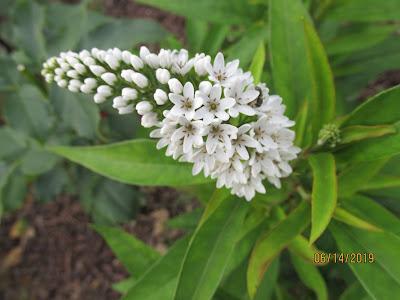 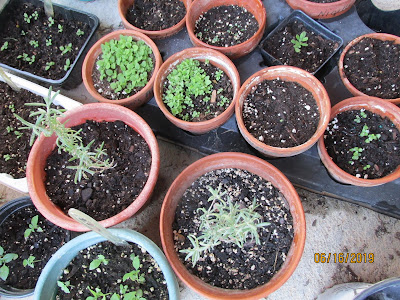 The morning after the rain was too wet to set foot in the garden.  I decided to devote myself to the pots of seedlings arrayed on the lower porch.
[Lacking a greenhouse, my porches are apt to become rather untidy 'nursery' areas for fledgling plants.]
Foxglove has usually been of frail germination for me. Expecting scanty results I was not careful in tapping the minute seeds of "Sutton's Apricot" and "Spanish Peaks" from their packets.
I am now faced with a crowd of foxglove seedlings fit to establish a small meadow. 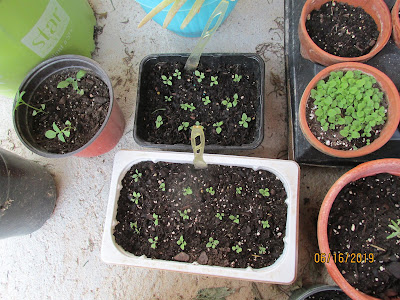 These two trays represent a very small portion of "Sutton's Apricot" lifted gingerly from the crowded clay pot.  Inevitably some of the tiniest plantlets were sacrificed to give better growing space to the slightly larger ones.
Some of the basil, "Spicy Globe," has been given roomier quarters, as well as three laggardly Lavender seedlings. 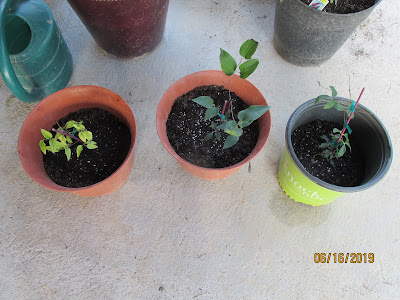 On 24th April I placed an order for three clematis offered in a 'half price sale' by Spring Hill Nurseries.  I expected the plants to arrive by early or mid May
I received several emails stating that shipment was delayed.
When the calendar page turned to June and the clematis had not arrived I was beginning to be annoyed.
The plants were in the mailbox on Saturday.
They were packaged in tiny plastic pots, swathed in plastic sleeves, then shrouded in cardboard jackets.
The first one I freed was pot-bound, a mass of stringy roots that had to be gently unraveled before I could settle it into larger quarters.
A second one, frail, with yellowed leaves, was little more than a rooted cutting.
The third had thicker roots which appeared to have been brutally trimmed before it was stuffed into the tiny pot with inadequate soil.
The names of each plant were stamped on the plastic sleeves, no label was in the pots.
I hope that all three may survive their indifferent handling and revive under my care, becoming sturdy enough for fall planting.
I don't think I'll order from this nursery again, no matter how alluring their sale offerings! 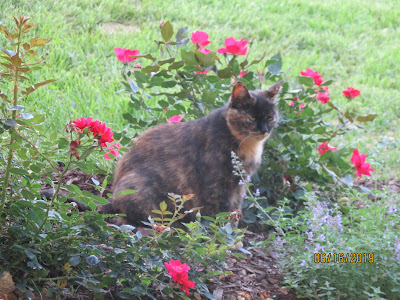 Sally-the Troll cat doesn't often pose for a photo, although she seems partial to early evening meditation on the retaining wall. 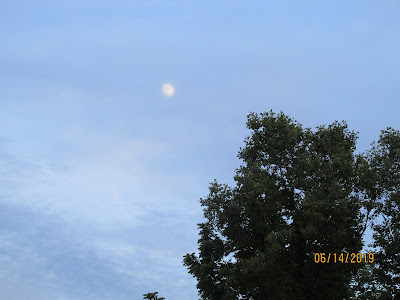 How is it possible that we are less than a week from the Summer Solstice?
[A rhetorical query!]
Twilight lingers long; this evening I could still discern the print of my book as I sat on the east porch.
How strange that as we are plunged into the real heat of  summer, daylight will commence its slow and at first barely perceptable dwindling toward autumn. 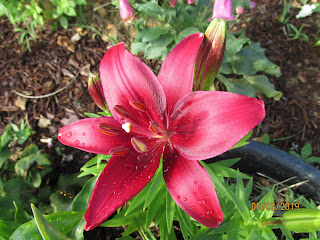 It was dark this evening at a bit past 8, the sky covered in thick grey rain clouds.
Since Wednesday morning the air has been thick with damp, a heaviness that changes sounds. 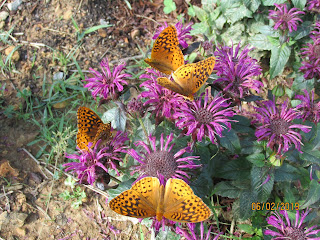 I have worked, between showers, at transplanting.  Most of the nursery plants have found a place in the strips along the retaining walls or in large pots placed near the newly completed side entry porch. 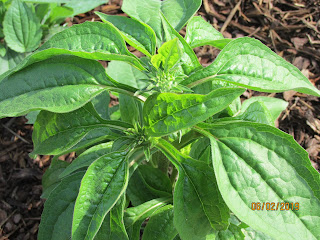 The most robust of the seedlings [an heirloom tomato, Jupiter's beard, small coneflowers] have been transferred to grow on in larger quarters. 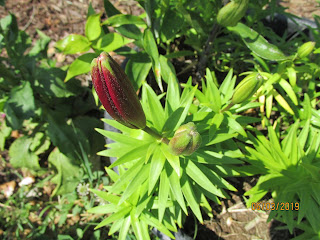 The dwarf Oriental lilies are blooming in the tub where they over-wintered, waiting til I can make a more permanent place for them.
Neighbor Fred has entrusted two amaryllis into my care; they, along with one that he nurtured for me last season, have been interred in a large tub for the summer. 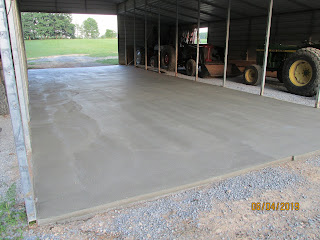 Concrete was poured Tuesday in the main bay of the barn, creating a decent workplace.
The men have put their efforts toward mechanical work on the big 4 wheel drive truck and several tractors that needed some tinkering. 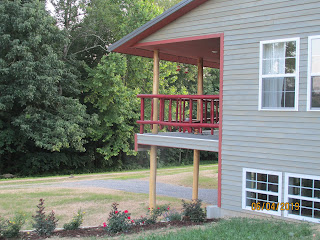 It was decided to paint the rustic porch railings with the same dark red mixture used for the exterior doors.  Howard accomplished this, leaning over the rails to paint the outer areas.
[Not a job I would have relished!] 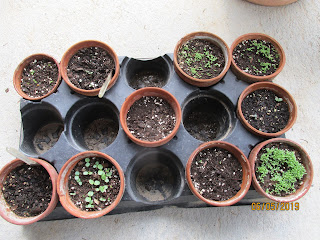 On the lower right are Maiden Pinks--seeds sprinkled from the packet like finely ground pepper.
I don't think I can separate and save all of the pinks, much as I love them.
I will have enough for all my needs and plenty to offer to friends.
The pots in the upper right are foxgloves--'Spanish Peaks' and 'Sutton's Apricot'. In other years when I have sown foxglove the rate of germination has been poor.
The vigor of the seeds this year has been astonishing.
Second from lower left are Jupiter's Beard which are already enjoying a larger pot.
Less enthusiastic, but emerging, are Balloon Flower, Lady's Mantle, Pale Coneflower, and a few Lavender. 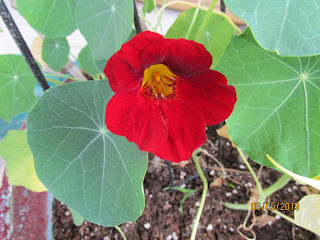 The nasturtiums from a mixed packet, are spindly with some yellowing leaves, but have started blooming. 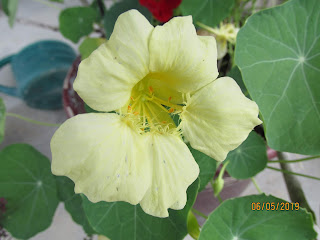 My usual preference is for dark red nasturtiums but I'm liking this delicately pale yellow.

It seemed that I accomplished quite a bit yesterday--what a decade ago would have felt like an ordinary day's work.
Today, predictably, I've been tried and rather witless!