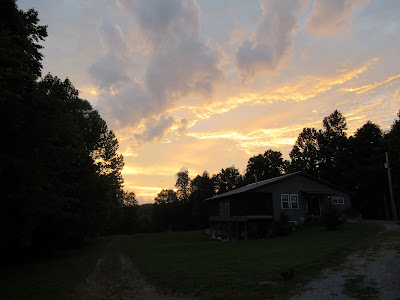 We hoped for rain this evening. The 'weather ribbon' that runs at the bottom of my screen proclaimed 'rain coming' and then 'rain to stop.' Neither forecast came to pass.
At about 6 p.m. dark clouds billowed to the north and west, there was a faint mutter of thunder, then the sky cleared to a saffron sunset. 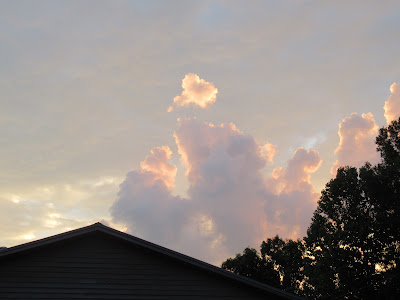 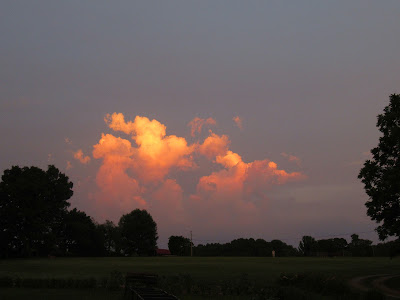 This is not an accurate coloring of the sky to the east, but makes for a strangely interesting photo.
Our beachy Amish neighbors cut the small field on Monday--a lighter cut than the first one in mid-May.
June has brought scant rain; the gardens are dry. 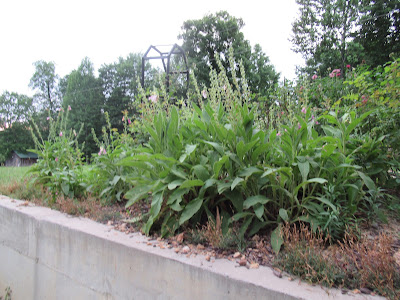 The glory of roses and foxgloves is several weeks past. The David Austin roses have been pruned, foxglove cut back leaving only shorter stalks to set seed. Bees still hover around the fading blooms. 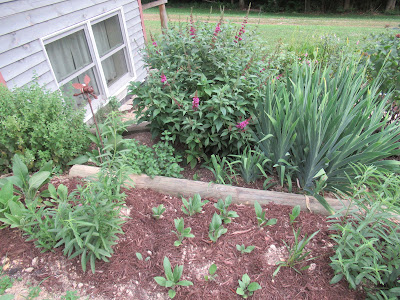 This strip of my planned back garden was planted May 15th, the mulching accomplished June 5th.
I wanted plants that would self-sow--they have done so, but not tidily. 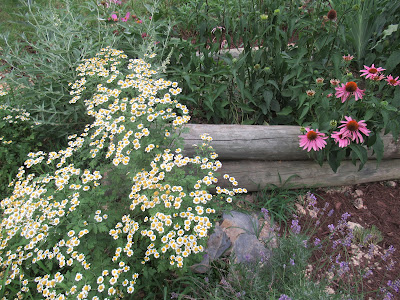 Feverfew in bloom is attractive, but scatters seeds prolifically and the new plants pop up in vigorous profusion. Coneflower likewise springs up in thick clumps. I have ruthlessly yanked out feverfew, tried to thin out coneflowers, taking a few small plants into the greenhouse and potting them up--with some vague idea of extending the wildflower planting up the back slope.
Unfortunately I have overwhelmed myself with garden imaginings which I haven't the stamina to complete. 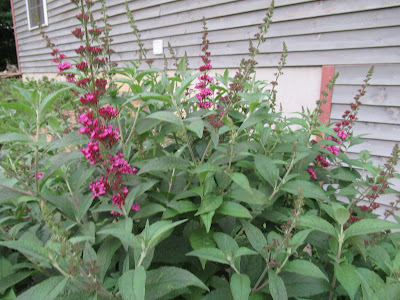 This buddleia [butterfly bush] was labeled as 'dwarf' when I purchased it three years ago. I cut back the towering branches in October, pruned in early spring, and then in a fit of determination to restrain it, pruned again. 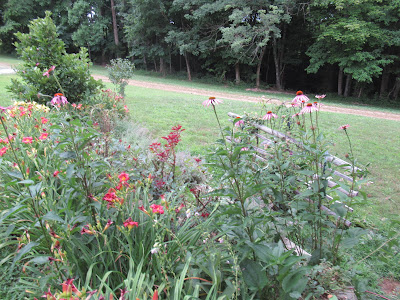 The front wall border is looking shabby in the heat. I lightly pruned the Knock-Out Roses as the blooms faded, hoping to discourage the yearly invasion of Japanese beetles. Thwarted of clustering in the blossoms they quickly reduced leaves to lacy shreds. A dose of Sevin dust and a few days later on June 10th a radical pruning which I hope will keep the wretched beetles under control. 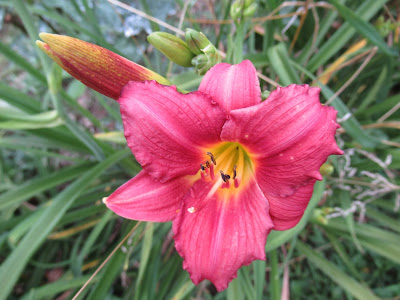 When the roses fade, the daylilies provide color. 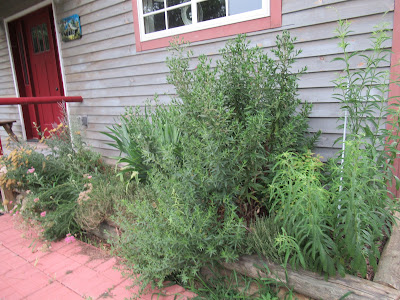 If plants enjoy their location they seem to grow out of bounds. The New England asters, blue prairie sage, blackberry lilies--all raised from seed, have leaned out of the east raised bed crowding the achillea and the edging of thyme. It appears that shorter more compact plants would be more suitable for that location. The thought of revamping the area is daunting. 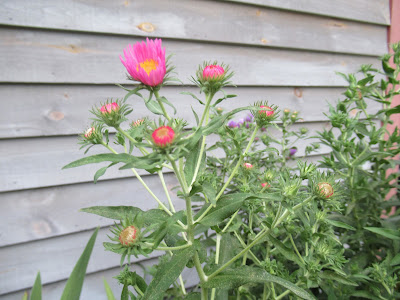 Asters--which would have been late summer bloomers in my native Vermont--are opening too early.
Twelve years of gardening in Kentucky and there are still surprises and challenges.
It has always interested me that the summer solstice marks the turning point when length of daylight begins almost imperceptibly to diminish, and yet here in the northern hemisphere we are tipped into the full strength of summer's heat.
In these evenings of long twilight I am usually outdoors, watering, putting out food for the feral cats, shooing the racoons off the porch, prowling about in the heat-shimmered dusk.
Jim remembers the several boyhood summers when his family lived in Alaska and the sun hardly went down at night.
I recall summers in Wyoming where daytime temperatures could soar into 3 digits--a dry scorching heat--and yet the long evenings cooled as the sun sank behind the Wind River mountains and the quilt at the foot of the bed was most welcome by the wee hours.
The seasons and the weather keep us mindful of our human limitations!
Posted by Morning's Minion at 10:22 PM 7 comments: