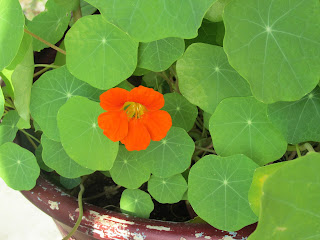 I planted my first packet of nasturtium seeds when I was about 12 years old.
I don't recall if I had selected the seeds and paid for them from my allowance, or if my father brought them home.
I planted the seeds in what had once been a play area on the north side of our small house, a spot that was also open to mid-morning sunshine.
The seeds germinated and soon the scarlet blooms appeared on long slender stems.
I planted nasturtiums there each year until I married and moved away.
Nasturtiums became a staple of my flower gardens.
I loved the variety 'Alaska' with its compact plants and white-splotched leaves.
'Empress of India' was a joy with smaller blue-green leaves, a trailing habit and small blooms of deepest red. 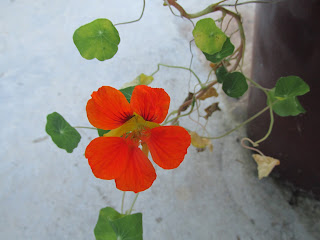 I had every expectation that nasturtiums would flourish in a porch planter in Kentucky.
I tucked in seeds of several varieties: 'Moonlight,' 'Whirlybird.' Dwarf Jewel--if they bothered to germinate they were pathetically feeble.
I had hopes one summer that there might be a few blossoms, only to discover on a hot July morning that a visiting cabbage worm had destroyed the plants, leaf and bud. 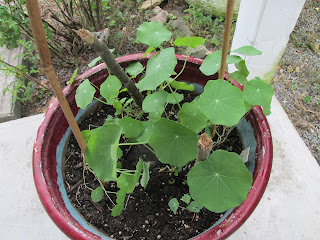 This spring I bought a 4-pack of nasturtium starts, coddled them indoors on the pantry windowsill until warm weather moved in to stay.
I tucked them into a big pot, poked in sticks to discourage cultivation by cats, and more or less resigned myself to another failure.
The nasturtiums grew, producing long loops of green vine.  I wound them around a wicker support, watered, turned them toward the sun.
I was rewarded with a continuous parade of orange-red blooms.
By late August the plants had seen their best days, They were leggy, tired, but still producing flowers.
I snipped and propped, reluctant to let them go.
Discovering a two year old packet of seed, I tucked a few in amongst the weary stems. 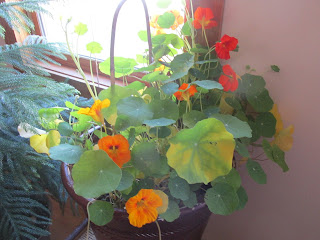 By mid September I had vigorous plants, but wondered if frost would hold off long enough for blooms. 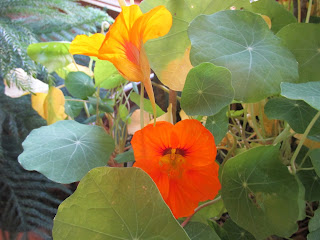 In this strange mild autumn there was no threat of frost until last week, and the first tiny buds swelled and opened.
On two chilly nights I swaddled the pot in an old tablecloth. 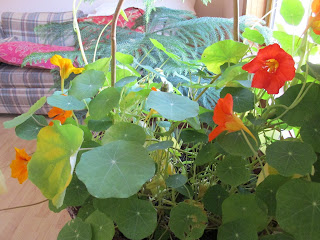 A week ago the forecast was for overnight temperatures of 29 F.
I lugged the pot through the house, into the sun room. 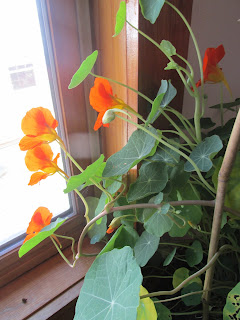 The best I can give it is a spot in one of the east windows.
Predictably, the lower leaves are turning yellow.
Still, for perhaps a week or two more I can enjoy a profusion of blooms, extending summer and having the joy of viewing my nasturtiums close by.

Slaving Over a Hot Stove 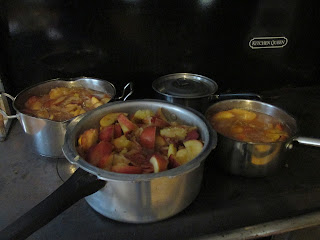 Morning was cool here, the sky a pearly grey.
Jim wanted French toast with a topping made from frozen blueberries--a fairly quick breakfast as we intended to get voting over with early and get on with our day.

I bought more apples yesterday from the Beachy Amish family up the ridge.
I dithered over my selection, knowing that Empires make lovely applesauce, but intrigued with several varieties which had been brought in from Pennsylvania since my last purchase.
I came home with a half bushel bag of Winesaps [a favorite] and a bag of York [aka York Imperial] an apple with which I was not familiar.
Jim immediately bit into a York and declared it not as crisp as the Winesaps.

From wikipeda: This cultivar has a tart yet sweet taste, and keeps extremely well, becoming sweeter and mellower-tasting over time. It sweetens in flavor for 5–6 months after it is picked. The York Imperial is excellent for baking, cooking, apple sauce, cider, preserves, jams, dried apple slices, and juice, as well as eating fresh. The 'York Imperial' is one of the few apple cultivars to have survived for 180 years. It is still commonly grown in orchards and backyards in the continental United States, especially Pennsylvania, Virginia, and North Carolina. It was often exported to Europe before import restrictions were implemented.
In addition to its native region of south-central Pennsylvania, the 'York Imperial' is now also grown along the Shenandoah Valley and the Blue Ridge Mountains.

A laundry load of sheets pegged onto the back porch lines, bed freshly made, jeans and shirts tumbling in the dryer and I decided to spend the rest of the day making applesauce to can.

Stewing the apples is a long, slow process, one that does well on the wood stove.
The day seemed cool enough that the wood fire might be pleasant rather than stifling.
I soon had three kettles of apples simmering,so turned my attention to cooking dinner on the wood stove as well.
The kitchen grew hotter.
Kettles and pans needed to be twitched about so that the apples cooked without scorching.  Potatoes were nearly jumping in their covered saucepan and needed to be pulled to a cooler spot. Salmon patties sizzled in a buttered skillet.
The kitchen was overly warm!
I opened a window to let in cooler air.
I opened the door into the sunroom off the back hallway.
My face felt flushed and my shirt clung to my back.

I discovered that York Imperial apples take considerably longer to cook than others I have used.
I set the canner on the stove, poured in water and left it to begin heating while I put the hot stewed apples through the foley mill, stirred in sugar, ladled the sauce into quart jars.
I added more wood to the fire.
Jim, on a meander through the kitchen, tweaked the dampers for maximum heat.
Water bubbled and boiled around the jars in the canner.

The fire has died to embers, the canner is resting on the coolest part of the big black range.
Kettles, ladles, wooden spoons, have been washed, my work area tidied.
The cats have sprawled near the stove.
A gentle mist of rain has fallen intermittently through the evening.

As I've labored over the applesauce I've pondered the work of our fore-mothers during the many years before electric or gas cookstoves became commonplace.
Every meal was cooked over a blazing hearth, or on a 'range' fired by wood or coal.
I choose to make applesauce [among other things] on the woodstove during the cooler months from a sense of old-fashioned frugality.
But--I have the option of using my electric cooktop and oven, the microwave, the crockpot in preparing a meal.
I could buy the uniformly pale and rather insipid applesauce available in any supermarket.
I appreciate the sense of satisfaction, that feeling of carrying on a frugal tradition when I view the rows of filled jars on the basement pantry shelves.
No doubt this pride of accomplishment was shared by my fore-mothers.
I'm guessing that, like me, they admitted to the weariness of  hours spent slicing, stirring, ladling, bottling, in a too warm kitchen.
I have more apples.
I will not make applesauce tomorrow!
The apples will keep until a day when the warmth of the wood fire is more welcome.