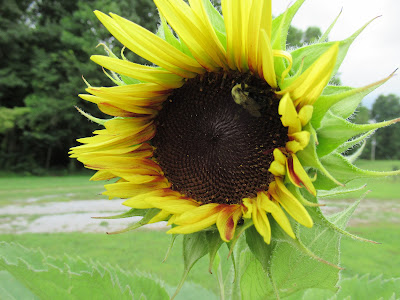 Sunflowers always delight me, especially the varieties that branch with a succession of smaller flowers. 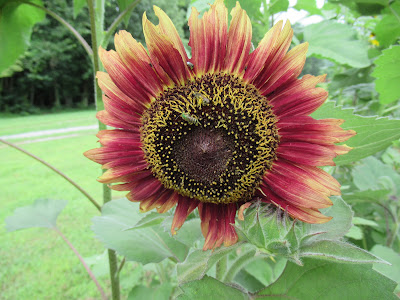 I should tag this one to save some seeds for next year. 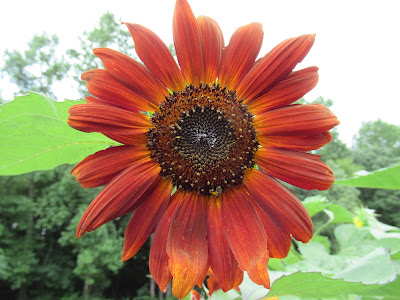 A burst of color! 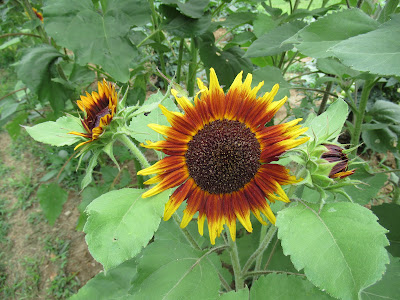 One of the 'dwarf' varieties. 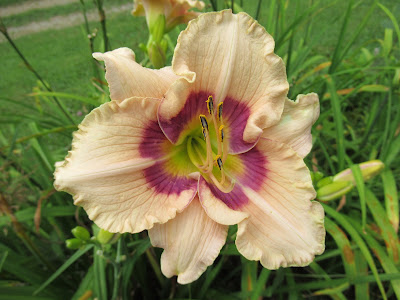 One of my fancier daylilies.
I've given up hoping to keep weeds out of the rough strip along the driveway. Three years of hands and knees weeding, mulching, weeding again, have proved ineffective. The more robust plants there are able to deal with the invasion--lilies, iris, peonies, coneflower.
Gooseneck Loosestrife [lysimachia clethroides] has rampaged through the lower part of the strip in spite of my efforts to restrain it, so, let it go!  I've moved the bee balm and will likely move the remaining phlox and a rather pitiful achillea. 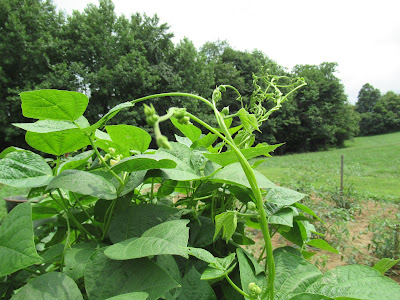 Thus far we haven't picked a single green bean. I chose Blue Lake climbers which were very slow to germinate. When I wasn't looking bean beetle larvae did some damage. The recovering vines have climbed their fencing and headed back down, finally starting to blossom.
Picking beans through this tangle probably won't be a joy.
Jim has been poking in seeds of bush beans where he digs a hill of potatoes or pulls beets.
The veg garden is now his remit--and he is most possessive of it! 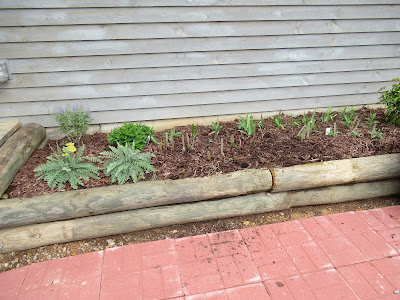 New raised bed.
I've been setting in seedlings raised in my greenhouse as well as a few nursery plants. Jim placed the brick walk earlier in the week. I would like to extend the bricks outward for two more rows, but I think I won't suggest that at the moment.
Some creature--coon? possum? has been rootling nightly in the mulched bed. Several spears of the blackberry lilies have been munched and spat out, the tiny aster plants sampled. I've poked in plastic cutlery attempting to barricade my plants--not working well as a deterrent. 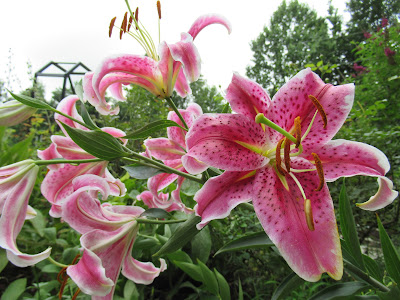 These beauties have been laid almost horizontal by frequent rains, but their sweet scent greets me when I peg out laundry on the porch lines.  When working in the raised beds the perfume is heavy on the damp air. 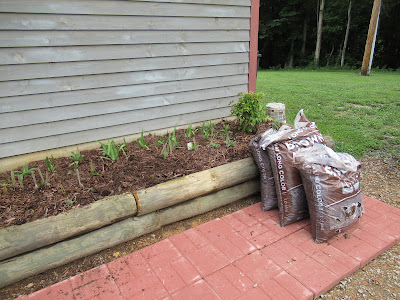 A second view of the new raised bed--you can see that the nightly marauder has clawed open a bag of mulch. 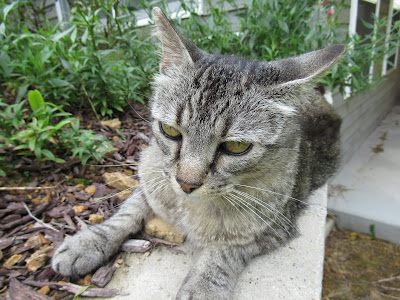 Walking past the west wall garden this morning I stopped to tweak out a few blades of grass within easy reach. An hour later I was still pulling weeds, mostly clumps of grass.
Willis promptly showed up to direct my efforts, parading along the wall, getting in my way.
He doesn't like being asked to move. 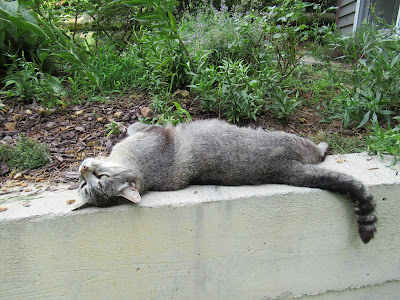 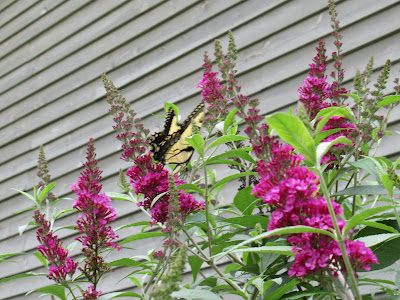 This butterfly bush is one of two which I purchased as part of my first season gardening efforts here. [2019]  I planted them at either end of the wonky fence Jim hastily constructed to harbor my clematis vines. The purple buddleia didn't over-winter and this one was puny.  I moved it last year to the raised bed in the west garden which we enriched with bagged soil. Although labeled as 'dwarf' the bush has become a towering sprawl of branches. 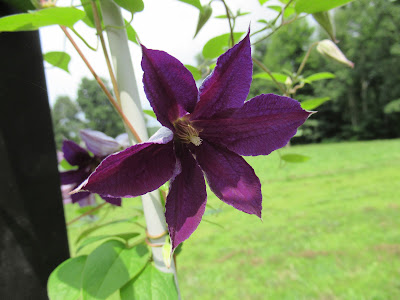 Clematis 'Jackmani' on the new trellis. 'Dr. Ruppel' on the other side of the trellis is struggling. 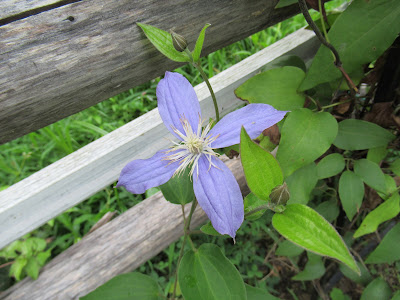 This is 'Arabella' putting out a few hesitant blooms on the makeshift fence.
June weather was, for the most part, cooler than usual, starting to be dry mid month, in spite of heavy rains over the second weekend.
July came in with cool nights and early mornings that were a delight.
Hummingbirds are at their busiest when I take my mug of half-caff coffee to the east porch.
Watering and tending the container plants on the porch and front patio takes a surprising amount of time. During hottest weather I water in the greenhouse and new raised bed at sundown.
Less than a month past the summer solstice it is interesting to note the earlier sunset, with the sun moving farther to the northwest in the evening.
In a world where so much is unstable, it is reassuring to watch the seasons progress in their orderly round, just as they have always done.
Posted by Morning's Minion at 3:28 PM 2 comments: