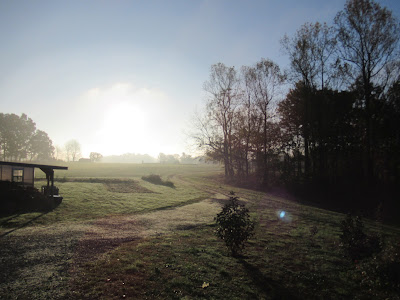 The first morning of November, sun slanting through lingering mist. Cool outside but the sun spilling through the east windows created pools of warmth that pleased the cats.

The sunlight also called attention to cat hair clinging to cushions and throws. I bundled these downstairs to the laundry, got out dust mop and broom to tackle the swirling fluff that is the price we pay for the company of our pets.

By the time the first load of laundry was ready to peg out on the lines, the mist had burned away. Pulling on a fleece jacket and wellies I went out with my camera to record the day.

Although there was a method to my arrangement of photos for this post, blogger--after taking more than a half hour to load the photos, flung them onto the page in reverse order. 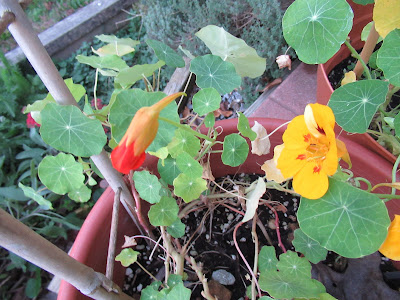 Most of my nasturtiums have been in shades of gold or pale yellow. This scarlet bud may not have time to fully open. Tonight's low temp is projected as 39 F but nights for the remainder of the week are expected to bring frost. It has been a mellow autumn, one to treasure. 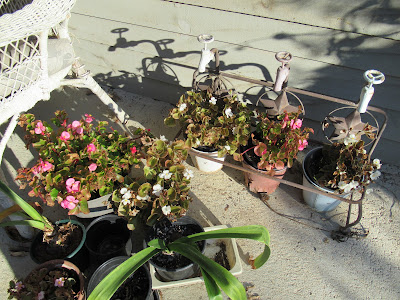 Begonias have summered for several seasons on the back porch. I debate whether to bring them inside for the winter; they quickly become shabby and leggy, but revive in the spring after a good pruning. 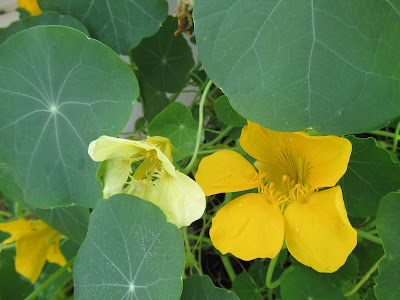 A close-up of nasturtiums growing in the 'tower' by the greenhouse. I draped a sheet over them this evening; they are susceptible to the first cold weather, stems and leaves turning to pale mush with the first frost. 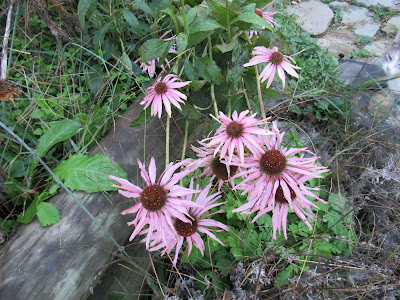 A last burst of coneflowers in the weedy muddle of the back garden.
I had such hopes for this space and its first season was promising although weeds and rough grass were a constant trouble. Lavender and thyme did not thrive here succumbing to surprisingly damp conditions. I'm hoping for some warm afternoons when I can do a bit of clean-up, but the future of the plot is uncertain. 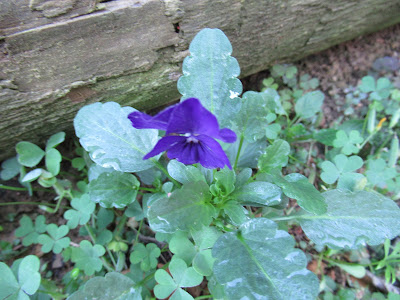 A viola has popped up below the raised bed--last winter there were several that poked brave faces through frost and snow. 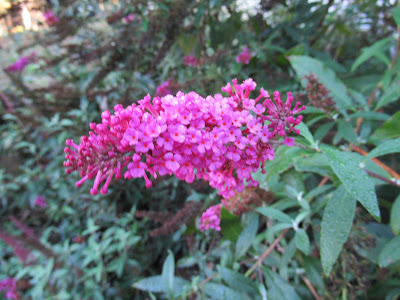 The buddleia --sold as a 'dwarf' variety has quite overtaken the space. Its over-hanging branches may be in part the culprit creating too much damp shade for the lavender. 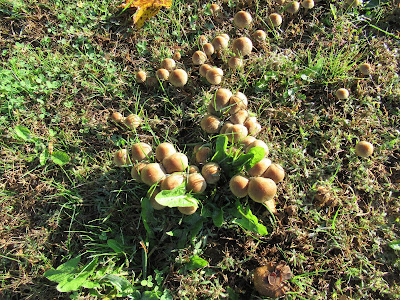 This colony of mushrooms has sprung up at the end of the veg garden. 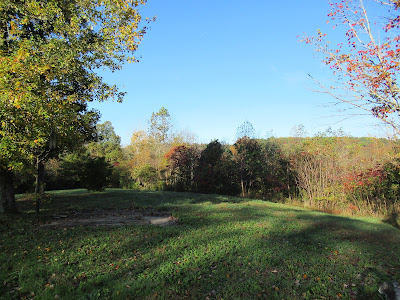 The western edge of the property where our campers were parked during the fall of 2018 and through the winter months of 2019 while our house was under construction. It was a rather dismal span of cold and cloudy months in cramped quarters; the rubble of the former owner's burned house was the immediate view. With the mess buried, the ground leveled, two summers have covered the area with a blanket of green grass.
Lately we've been seeing deer grazing under the trees--sometimes only one that J. thinks is a young buck--at other times there are three. 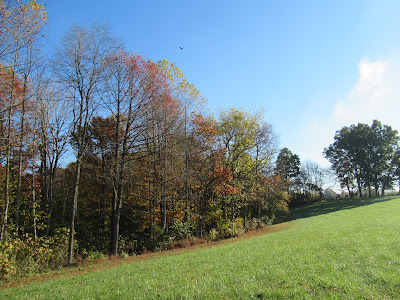 The tree line that bounds the north ravine. J. spent today cutting fire wood just beyond the shaded space near the top of the slope. 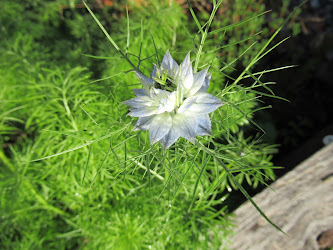 A pale nigella blooming in a froth of self-sown plants at the edge of the front raised bed. 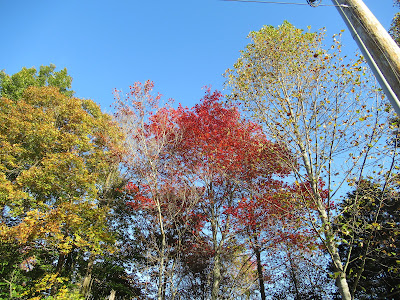 Rain and wind have been bringing down the leaves. The big black walnut tree at the bend in the lane is nearly stripped. Along the edges of the north and south ravines branches and limbs come into  focus as more leaves sift down.
Fall color in this region lacks the brilliant red of sugar maples so familiar in our native New England.  Here the colors span a range of old gold, russet, yellow orange with only an occasional  burst of scarlet. Later this month the shiny bronze of oaks will dominate as the season edges toward winter.
We are into the final week of daylight saving time.
I grumble at the twice yearly ritual of changing the clocks.
It seems to me that we could designate one mode of keeping time and allow the seasonal patterns of daylight and darkness to order our lives.