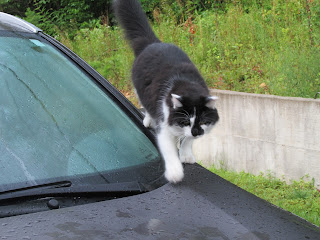 Bobby Mac slides about on the wet hood of the car.

I woke this morning to the rumble of thunder. I'd spent a restless night--body tired, mind very busy--and due to the grey-green half-light had no idea of the time.
I've been sleeping mostly in the charming small bedroom at the end of the hall--a room with both a north facing and west facing window. [The solitary bedroom is a concession to the respiratory flu which has spoiled our sleep for several weeks.]
From the bed I can look directly into the trees which ascend the side hill beyond the retaining wall.
Leaves rustled in a slight wind, and  moisture plopped from the over-hanging roof.
Eventually I heaved myself from bed, groped for my slippers and padded along the hall, down the staircase.
It was 7:30. 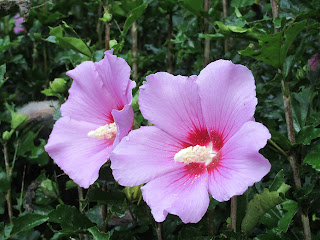 By the time we had cleared away breakfast the sun had come through and the thermometer outside the kitchen window stood at 92 F.
I pegged sheets on the back porch clothesline, dealt with litter boxes and scuttled inside, out of the damp sultry air. 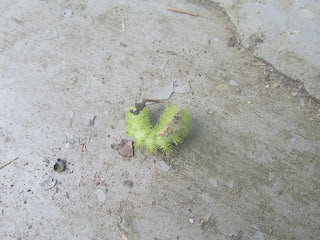 A strange bristly green caterpillar at the back door. 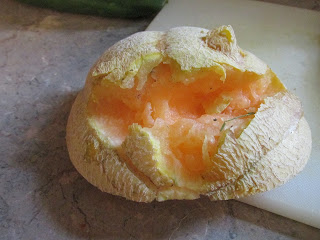 Jim stomped to the garden in a rage--from the upstairs window he had spied the damage done to a ripe melon--one he had thought not quite ready to pick the day before.
Possums always know when the melons are at their best and they gnaw into them by night.
You can see how much we had to cut away to salvage the remainder.
The live-trap is now set up invitingly at the edge of the garden.

I pottered about with a bit of house-cleaning, made up the beds with fresh sheets, briefly considered some sewing.
Instead of doing anything really useful, I decided to work on family research--learning more about the life and times of a 3x great grandmother.  Some of my findings are undoubtedly repetitive--but I wasn't inclined to rootle about in the too warm room upstairs where my notebooks are stored.
The afternoon raveled away as I squinted at vintage newspaper scans and census listings.
Jim went out to roar about on the lawn mower.
I fetched in the laundry.
The boy cats came inside and flopped on the cool wood floors.

Thunder began again to rattle and boom, wind whirled through the trees, and then rain pelted down, creating a steamy haze which hung over a green twilight.
At 10: 45 the needle of the thermometer, viewed through a rain-spattered window, stands at 77 F.
Lightning still flashes, but the thunder has moved off.
Jim is micro-managing the AC unit in 'his' bedroom--the fan is whirring gently in mine, the windows are open and the curtains parted.
We are promised a break in the month-long heat wave!
I hope for a restful night and a cooler day which may inspire me to noticeable accomplishments. 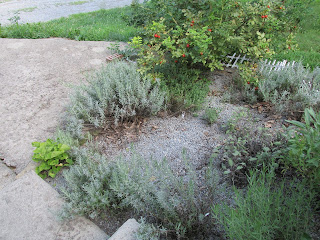 We expect July to be hot and humid--that doesn't mean we have to like it!
My Facebook memory feed kindly reminded me that I had linked to a blog post last year on this date, an essay which quite thoroughly expressed my long-standing dislike of hot weather.
The discomfort of stifling heat has this year been aggravated by the fact that both Jim and I are still coughing--an enduring legacy of the respiratory virus which he brought home from his vacation.
I have continued to read, to do the most necessary housework and cooking [we aren't particularly hungry] and to do a bit of gardening.
I didn't cut back the lavender this spring--it quickly broke dormancy and flourished with fresh tips and flower buds.
As the blooms faded and dried the effect became very tatty.
I should perhaps have pruned most of it back to the ground, but I settled for snipping off the dead flower stalks and cutting out bedraggled undergrowth.
I decided to leave the clump of purple violets which appeared in a corner of the herb bed. 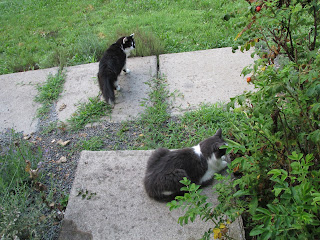 Grass had sprouted in the sidewalk cracks and along the edges of the side porch steps.
By the time I tackled this area on Tuesday forenoon the cats had retreated to sprawl on the porch floor out of reach of the sun.
Several varieties of thyme are planted along the outer edge of the walk, interspersed with dianthus and a few spare lavender plants.
Kneeling on an old cushion I snipped and pruned and pulled invasive grass and weeds.
I thought I had been working for about 45 minutes.
When Jim appeared and invited me to go with him for errands I realized I had been working in the hot sun for over two hours.
It was a relief to go inside for a cool shower, clean clothes, and then become the passenger in an air-conditioned car. 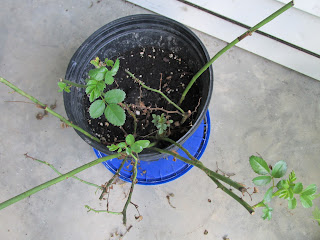 When our nephew and his wife were here last month we went with them to explore a wild acreage they have purchased on the other side of the county.
Masses of rambling roses grew along the rough track and clambered through the weeds.
I expect they are escapees from a nearby abandoned farmhouse.  C. obligingly brought me back a bundle of roots which I poked into a pot of earth.
Careful watering has inspired the growth of fresh green leaves and hopefully the development of healthy roots. I will find a spot to plant these before frost. 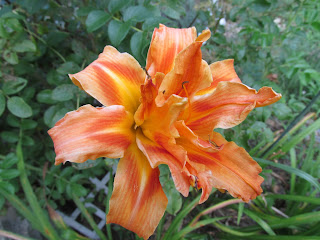 The double daylilies are nearly at the end of their bloom for this season. 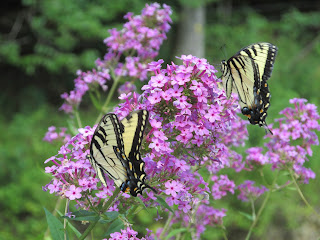 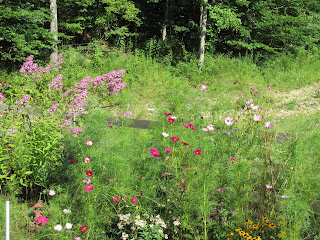 The flower garden has gone shabby; lilies, achillea, foxglove, coneflowers finished with their first bloom.  The self-sown cosmos have taken over.
I have dead-headed and cut back in anticipation of fall bloom.
I have spread more mulch--I think one could endlessly add mulch.
During a recent hot afternoon I read a small book of memoirs by a woman who gardened throughout her life in the Charleston, SC area.
The basics of her garden were laid out by a well-known landscape designer of the day.
Her attorney husband allowed her a generous budget for plants and shrubs, and perhaps most importantly, she paid a 'gardener'/ handyman to do her bidding--the heavy digging,  pruning, weeding.
While her garden was not designated as 'grand' it was appealing enough to be included in garden tours.
What one couldn't do with continuous funds and 'help' in a garden! 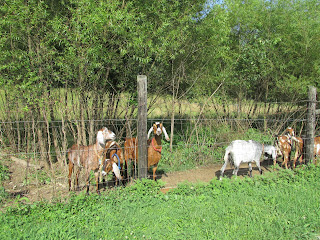 I stroll down the lane at either end of the day [when it is cooler] to visit the goats and the barn kittens.
The 'dry' goats have settled into the long narrow pasture that borders the lane.
In the heat of the day they lounge beneath the willows. 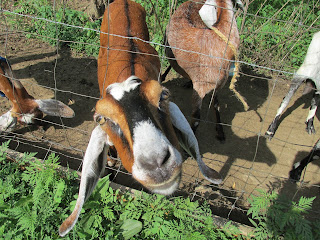 It is never too hot to poke a winsome face through the fence in hope of a tidbit.
Barring that, the 'girls' are pleased to have pats on the heads and admiring words. 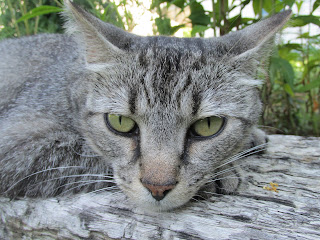 I will never have the garden of my wistful imaginings.
I doubt I will ever have garden 'help.'
I do, however, cherish the companionship of Willis-the-Cat--my faithful overseer! 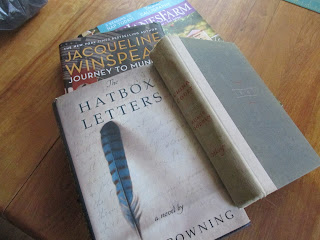 Not down time by choice!

Jim and his siblings carried home an unpleasant 'souvenir' from their recent Alaska cruise:  a really nasty respiratory virus.
Needless to say I wanted no part of it and promptly vacated the matrimonial bedroom for the small pleasant room at the far end of the hallway.
With determined zeal I wiped down surfaces with disinfectant, changed hand towels several times each day, added chlorine bleach to the dishwater.
It seems I might have spared the effort.

By Wednesday evening I too was ill--classic chills, fever, throbbing head, aches and weakness.
We have both coughed until the muscles surrounding our ribs feel torn from their moorings.
At that, I will likely recover from that symptom long before Jim.

I am blessed that I can read a good deal even when ill.
I've sat, blanket wrapped, in my rocking chair, tissues and tea to hand, then toddled off to my bed to the thick smothering half slumber that goes with this sort of thing.

I began a re-read of 'China Court' [Rumer Godden] on the way to Tennessee last Friday, wedged into the backseat of my daughter and SIL's car.
I expected to finish the book over the weekend, but a nephew's 18 year old daughter had a haul from the area second hand bookstore and offered the loan of something rather out of my usual zone of interest. 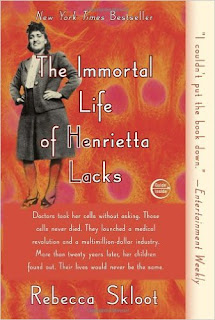 This was an engrossing and horrifying [true] story, the medical terminology softened by the author's compassionate portrayal of the family involved.
I finished the book in time to hand it back on Monday morning before our return to Kentucky.

'The Hatbox Letters' [Beth Powning] is a fairly recent book and another re-read.
I was surprised to read negative reviews for this book on 'goodreads'--many reviewers found the pace too slow and the details of locales and seasons too detailed.
As in my first reading of the book I was immersed--Beth Powning describes ancestral homes and gardens in New England--where I was born and lived much of my life.
Her descriptive phrases conjure the scents and sounds of old homes as I recall them, and the tracing of family history which forms one of several plot lines, is dear to my heart.

'Journey to Munich' [Jacqueline Winspear] is the latest in the Maisie Dobbs mystery series--one of the better ones. 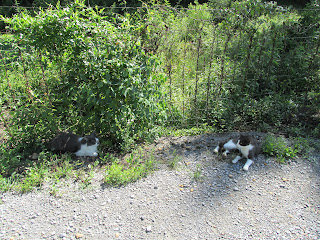 I have bumbled outside for a few minutes each day--long enough to water plants on the porch and to clean the cat litter boxes.
This morning the air was less humid than it has been and I felt less feverish, so decided to walk to the barn.  I knew that F. and B. were away for several hours, so I could visit the goats and the barn cats without concern that I might still be contagious to humans.
Shadow-cat [on the right] is most effusive whenever I go down. When I start back up the lane he follows, mewing soft-voiced, twining insistently about my ankles.
There is a certain point in the lane when our own resident cats strut out to challenge Shadow.
This morning it was Nellie.
There was no altercation, only a bit of bristling and some low key muttering.
As always, Shadow turns back. If I stop to watch, he mews wistfully, but knows not to push his luck. 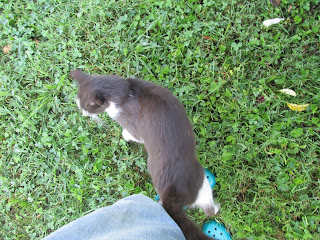 Shadow-cat winding himself around my clogs. 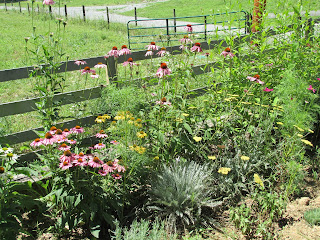 During the 10 days of Jim's absence I weeded and spread mulch in the perennial strips.
This week has brought torrents of pounding rain and created a rivlet that has torn through the lower end of the garden.
Nothing I can tackle in the way of repairs until I am well. 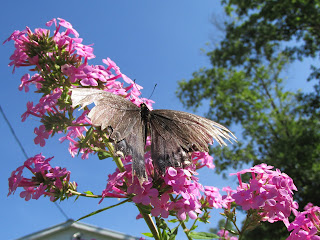 The tattered butterfly, seen this morning, is likely too dramatic a symbol of how I am feeling.
I am impatient with illness [and if truthful, rather resentful that I have the 'souvenir' without the holiday!]
While I wait for aches and coughing to diminish and energy to return I shall continue to read and sip honeyed tea.