A Project Too Long in the Doing! Done! 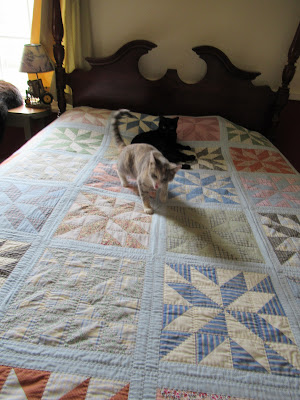 It seemed an interesting project at the time--to replicate the quilt my g-grandmother fashioned from worn bits of aprons, shirts, house dresses.
I had rescued some of the blocks from her quilt, hand-stitched them to muslin backing so that they could be framed as wall art.
In a rush of enthusiasm I collected a number of shirts from charity shops at less than a dollar apiece.
Between more sophisticated projects I salvaged usable chunks of fabric from each shirt and paired likely colors to construct triangle/squares using the grid method which though tedious [trimming to size] results in very accurately pieced units.
I put away the project, took it out several times over a decade of moving, refurbishing houses, finally settling into the present house built from the ground up.
I considered scrapping the half-completed quilt blocks but reminded myself that I'd put in enough time I should finish. 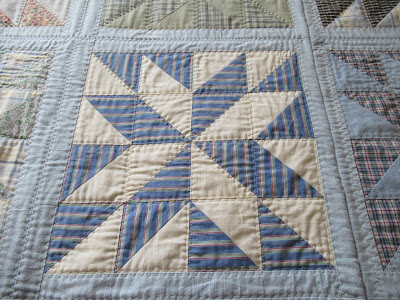 During January and February I've pottered downstairs, slowly sorting fabric, books, notions, arranging things in the workspace Jim and Howard set up with ample cupboards and a large L-shaped counter.
Inevitably, the neglected 'shirt-tail' quilt blocks resurfaced.
I finished trimming units to size, stitched until I had 40 finished blocks which I sashed into larger units of four, using 36 of the blocks.
I've felt I should try the method termed 'quilt as you go'--but didn't want to risk spoiling a 'good' quilt top in such an experiment.
I read various instructions, watched a few you tube tutorials, coming up with a plan that was a hybrid of several methods. 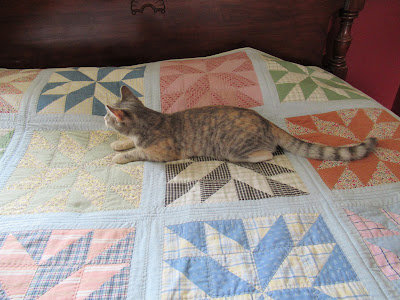 If you are a quilt-maker who has felt inspired to finish a quilt in this manner--don't--unless you are prepared for aching shoulders, a kink in your neck, hours of shoving unwieldy wads of fabric through your sewing machine!
However one goes about this process there comes that point where the wodge of fabric, batting and backing is not cooperative. 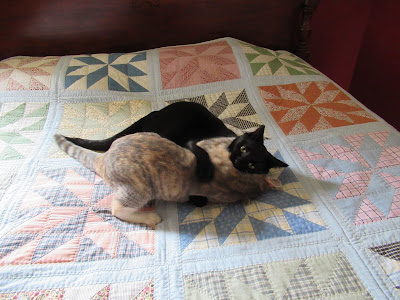 Way too much 'help' with my photo op--and I should have paid more attention to lighting in the room.
It is done. The overall look of the quilt is cheerful, homespun, vintage.
I can imagine this quilt in the setting of a summer cottage, spread over a bed in a simple room; it would serve well to soften a porch chair, a warm wrap for an early morning mug of tea or coffee--a blanket to accompany a book late in the evening.
The backing doesn't please me; there are some tucks here and there.  I experimented with several ways of finishing the back seams after the units were put together in rows. Not up to my standards, although sturdy enough. 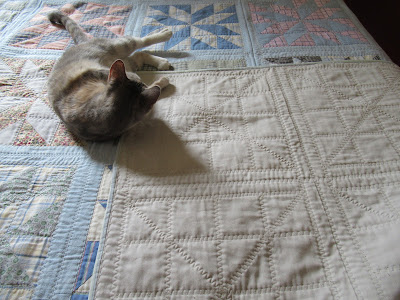 A look at the quilt back. 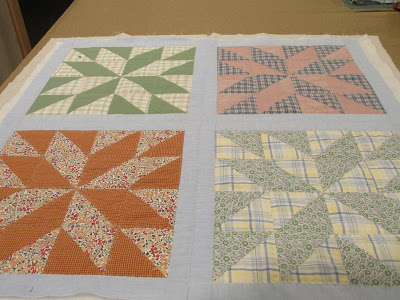 This earlier photo of the work in progress gives a better sense of the colors.
Its a cheerful thing, if a bit gaudy.
I doubt I will use this method again on anything larger than a cushion.
Gina has asked to adopt the quilt and it will go to her house tomorrow.
Posted by Morning's Minion at 10:30 PM 12 comments: 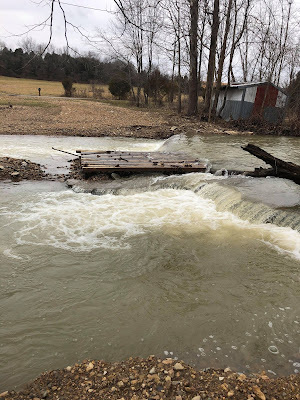 Photo Credit: H. L. Whitehurst
I loaded these photos on 4 March, then other things commandeered my time and energy.
Out of date, now, but will serve as a reminder of our plunge from February to March.
Rain began on the afternoon of the 28th--the kind of torrential downpour that rapidly swells normally placid creeks, creates runnels and streams where there is usually dry ground.  Many area homes--like that of our son and his wife--are accessed across a creek bed and at the height of a deluge and for 24-48 hours may be cut off.
Above you see water roaring down the not so aptly named Dry Creek, rearranging the gravel bed, shifting rocks, and in this case, carrying along a large dead tree. Not discernable until the next day when Howard began to cautiously assess damage are two large plastic trash bins lodged beneath the bridge and with the tree trunk, backing up the flow of water.
Neighboring fields were flooded, roads disappeared under fast-moving muddy water.
By Tuesday morning Jim and Howard tackled the mess with chainsaw [for the tree trunk] and two of their tractors to rearrange gravel.
One benefit for my projects is the large flat chunks of slate rock uncovered.  Howard corralled some likely pieces and suggested we come up on Thursday to collect more for the extension to the west garden--a planting that thus far exists only in my fertile mind. 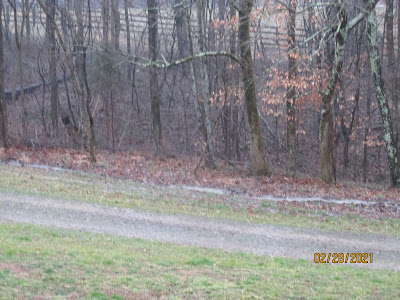 Here at our place water streamed down the drive and raced along the edge of the south ravine. 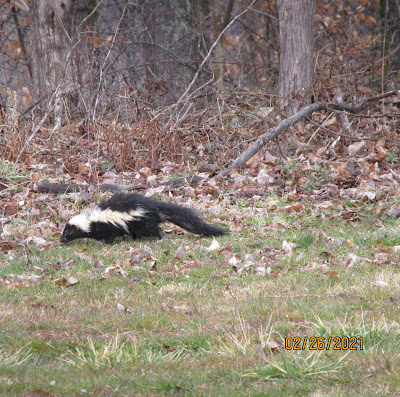 The resident lame skunk has not been sighted since Friday, before the rains.
He/she may be still around; perhaps if it's den was in one of the ravines it has been flooded out. 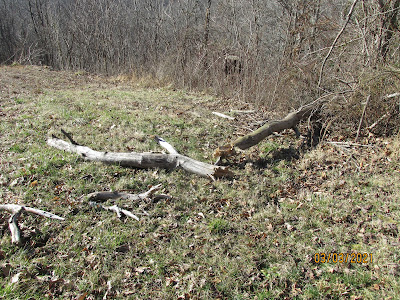 The ground remained squelchy for several days. I put on my boots and walked the perimeter of the open property. Several dead trees were toppled in the storm. This is one of those damaged by the fire [of suspicious origin?] which destroyed the house belonging to previous owners.
During the winter of construction our two campers were situated across from this tree and near the rubble left from the fire--a bleak view. All that now remains is a cement 'pad' which fronted the former house and the fire-dead trees which come down one by one. 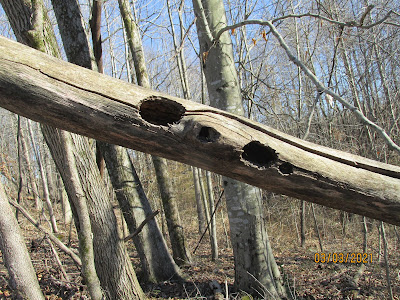 Along the edge of the south ravine a 'woodpecker' tree lost its precarious hold on the wet slope. 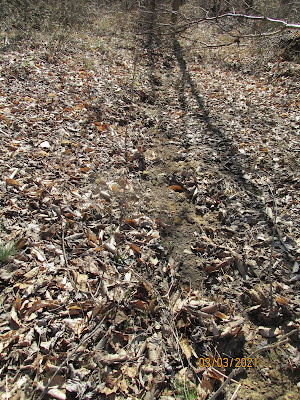 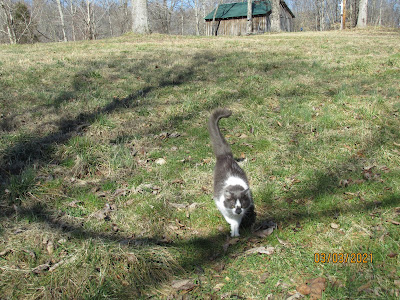 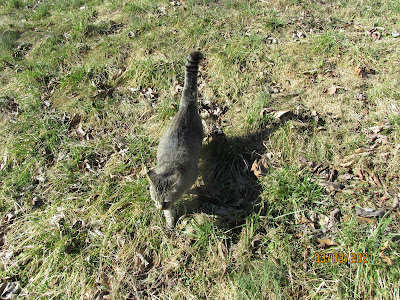 Willis has always been determined to plod along on my outdoor ramblings. 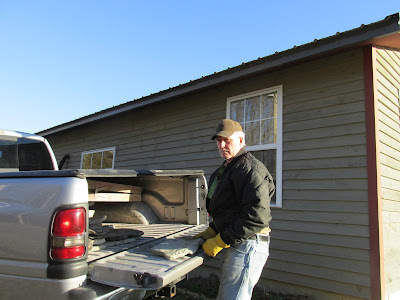 Jim unloading the first assortment of rocks for my garden extension.
Does he look enthused? 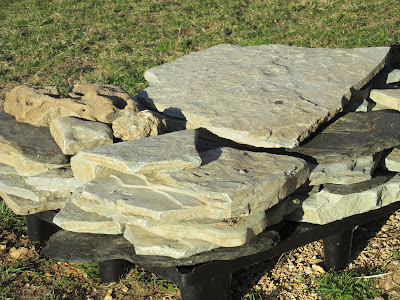 Rocks neatly stacked on a pallet.
These often split apart. I'm OK with that; I know where to find replacements should a path need to be re-laid. 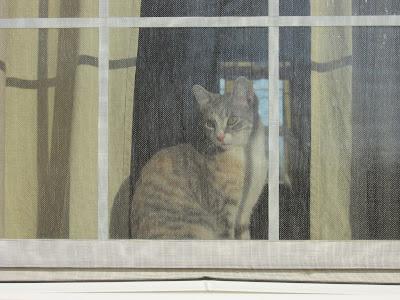 Shelby--much interested in the rock piling outside my bedroom window. 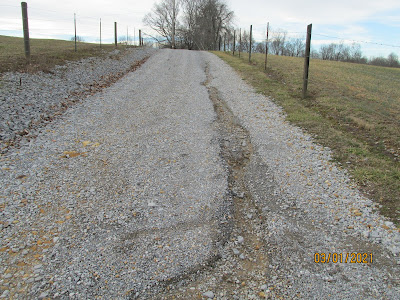 In heavy rains the gravel lane washes out.  Our neighbor seems to enjoy using his tractor to smooth out the ruts after a fierce storm. 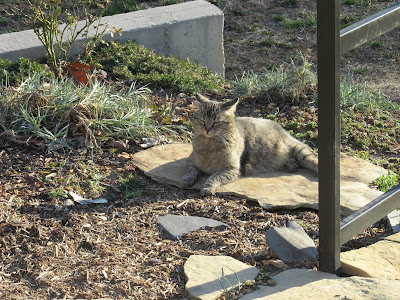 I've been able to do a bit of pruning and poking about in the west wall garden. Afternoon temperatures approached 60F once the rains passed, although mornings were frosty and the light wind had a sharpish bite.
Willis chooses a large sun-warmed rock for comfort. 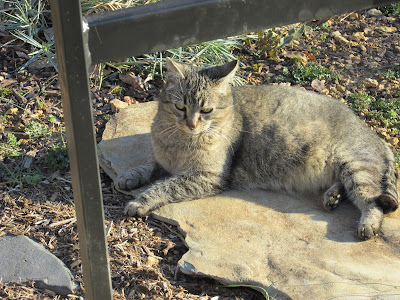 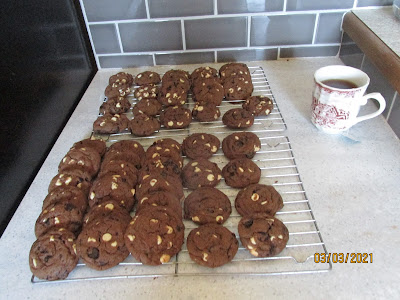 Fresh cookies and a mug of tea as reward for outdoor work. 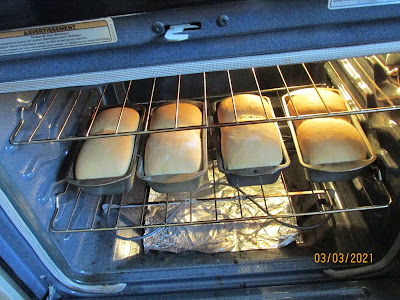 Loaves of bread nearly ready to exit the oven.
Baking, housework, sewing, reading--the usual round of things that brought me through February.
Mornings come earlier even on overcast days and the season moves forward, more or less on schedule, unmoved by the uproar and turmoil of humanity.
Posted by Morning's Minion at 6:26 PM 12 comments: