In The Midst of Moving 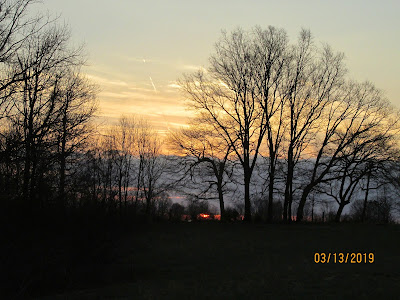 A windy sunrise this morning [Thursday--although my camera never immediately updates.]
It hasn't been helpful to have the time change occur in the middle [muddle!] of shuffling from one abode to the other.
We have been sleeping in the house for a week, although the electricity wasn't turned on until Tuesday. At present there are several lights not 'on' which the electrician has agreed to fix.
The kitchen is installed.  SIL Matt has ordered the materials for the counter-tops which he will make at his work place.
One corner cupboard didn't meet my expectations, but our innovative family carpenters made it work.
I have been shuntering between the camper and the house, lugging boxes, baskets and such, clearing the fridge in the camper.
We are still using the clothes dryer in its temporary location in the shed. After many trips up and down the lane I succumbed to using the car to convey laundry and other loads.
We have become weary, snappish. 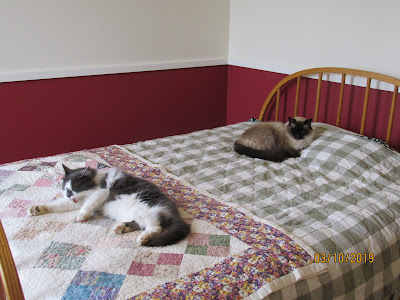 Our sleeping habits have evolved to a point where we keep each other awake more often than not when we share a bedroom.  The solution has been to plan 'side-by-side' rooms--close enough for 'companionship' but giving each of us the space to be more comfortable.
When I don't sleep [happens frequently] I can turn a light on to read without waking Jim.

The cats are delighted with the arrangement!  They can prowl from one bed to the other.
The cats are still feeling the strangeness of the new house.

Boxes have come in from the storage trailer all needing to be sorted.
Some items will no longer be useful in our more compact space.
I am rather over-whelmed with the need to sort and designate locations for everything.

Howard, who has betaken himself home for a few hopefully restful days, has reminded me that wearing ourselves out and becoming 'ugly' serves no good purpose!
Rather than reviewing the lengthy 'to be done' list, we need to concentrate on 'one day at a time!'

I'm coming to grips with the fact that it might take a month or more to have the house in good order.
[The ground floor living space won't be finished immediately, so there is that to consider.] 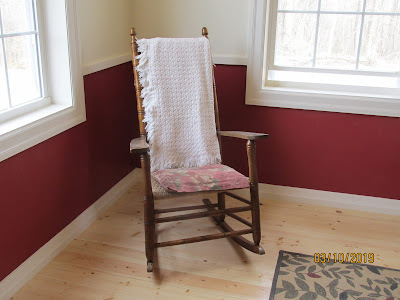 I placed Grampa Mac's rocking chair by the west bedroom window.
For a few days I have enjoyed the effect of minimal furnishings: bed, chair, night stand.
Today we have shuffled those to make room for my large double dresser.
If I can accomplish sorting clothes into the drawers and the shelves of my ample closet that may be sufficient accomplishment for the day.
Jim is outside, roaring about on his backhoe.
The wind is blowing like mad.
The wicker bench much loved by the outside cats has been conveyed to the sheltered lower porch of the house.
Willis, sensible cat that he is, immediately took up residence there.
Sally-the Troll-Cat is being recalcitrant. 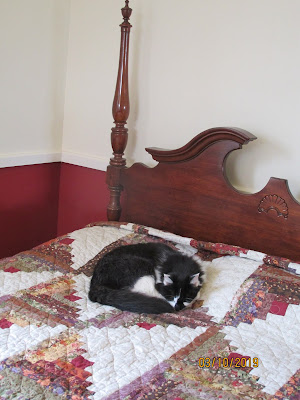 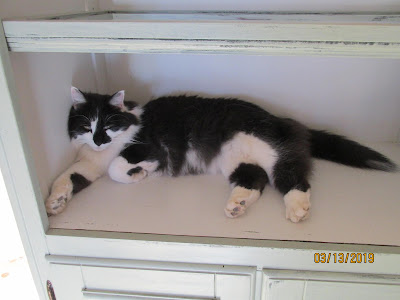 The empty cupboard in the living area provides a place of retreat.

I am off with a load of 'stuff' to sort into the house.
I must practice the recommended mantra:" It will get done when it gets done!"
Posted by Morning's Minion at 12:53 PM 7 comments:

More of the Same 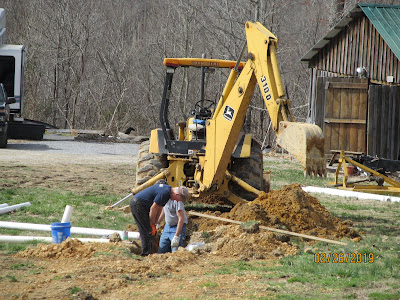 On a [rare] warm day last week J and H finished the installation of the septic line. 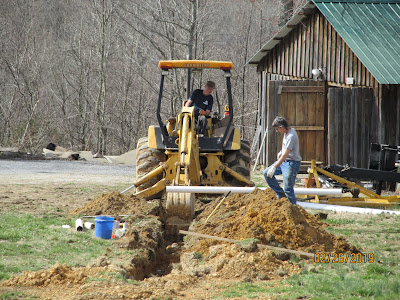 Even with the backhoe for the heavy digging, it was a long day with transit, shovels, lengths of pipe. 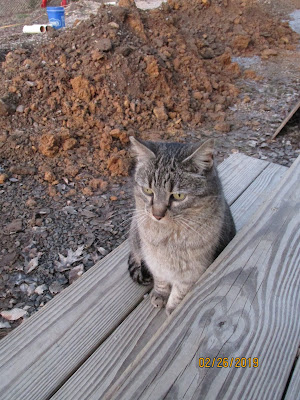 Willis, the feline overseer, was disgruntled by the rumbling presence of the backhoe, the upheavals of earth, changes in his familiar landscape, The cats who usually spend much of the day outside were intimidated and huddled in the camper. 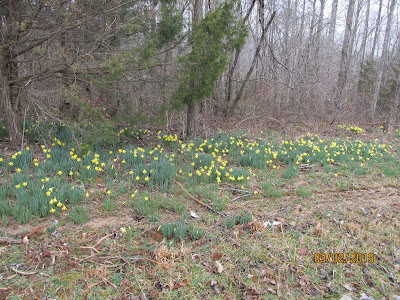 Weather deteriorated through the week, again becoming damp and cold.
Wild daffodils ['March lilies' in local parlance] have bloomed along the roadsides and pasture slopes.
Jim slowed the car so that I could aim the camera at swaths of them nodding in the fine drizzle of rain.  So much trash litters the roadsides that it was difficult to compose a shot that didn't include sodden take-away food containers, drink cans, crumpled plastic carrier bags. 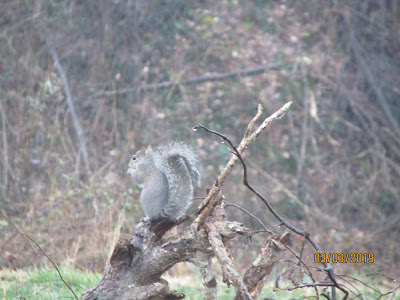 Sunday morning the rain thickened to a sleety consistency.
Sitting at my tiny improvised desk, a flash of movement caught my eye. Gathering my camera I quietly approached the window and watched as a grey squirrel skittered about in the tangle of fallen branches, eventually uncovering a coveted acorn.
We worked at the house through the afternoon, Jim nailing wainscoat in the sun room, I applying poly to Howard's beautifully crafted bathroom shelves,
We walked back to the camper in a colorless dusk speckled by flakes of wet snow.  The wooden steps at the camper entrance were coated with a thick substance that was not quite ice.
Cloud cover broke at Monday noon, revealing vivid blue skies.
Howard quietly continued his neat finish work--a fresh coat of white paint on window trim, nail holes filled, baseboards sealed and edged.
I polyed pantry shelving and then moved on to the sun room wainscoating.
I was committed to using the remaining 2/3 gallon of oil-based polyurethane that Jim purchased.
I concede that it is a 'tougher' finish than the water-based, but I detest its slippery consistency and tendency to run.  Have I mentioned that the stuff has a sickening reek?
I persevered, up and down a stepladder, grateful for the sun pouring through the windows.

Jim sorted lumber, ran down the electrician, demanding some input on why the electrical inspector has put us through endless delays for permanent electrical service.
Apparently, because he can and often does--a perhaps petty display of 'power!'

The rough-in inspection was done and passed in early December, now, belatedly, the inspector has presented a 'list' of modifications; it is generally agreed that any change orders should have been noted at the time of the original inspection, when they could have more easily been incorporated in the electrician's process.
Obviously, we are at the mercy of the inspector's whims.

We worked last evening until the sun was sliding behind the ridge in a pool of  orange light.
I dragged off layers of paint-daubed clothing, stumbled into the shower to rinse the odor of polyurethane from skin and hair.
The night fulfilled the warnings for cold temperatures.  We woke to a glowing, frost-sparkled morning, and the unwelcome realization that the heat tape on the camper water lines had  ceased to function.  The camper furnace chugged non-stop.
Jim drove to a local hardware store for a replacement heat tape, then he and Howard crawled about adding extra insulation over the lines.
By noon the lines had thawed!
I've hung about expecting a phone call from the appliance store to confirm delivery of the kitchen appliances;  the phone call wasn't made and I rather doubt that the appliances have appeared.
I have unwisely attempted to coax the recalcitrant washing machine through yet another load of laundry; it appears that this time I may be landed with a tub of wet wash that refuses to drain and spin.
These are not life-changing dilemmas.  They are aggravations, frustrations seemingly beyond our capacity to change.
The main floor of the house is ready for occupancy--sun streaming through the [yet unwashed] windows, the wood stove pouring out a comforting heat.  The gracious spaces of bedrooms and living area await the arrangement of furniture.
My own large washing machine and dryer could be set up in the basement laundry room.
The head-banging mood which has overtaken me today is, perhaps justified by delays and issues not of our making. My 'good sport' mode of endurance needs a boost!
That being stated, it doubtless behooves me to cease complaining and go out into the bright, cold, windy afternoon. 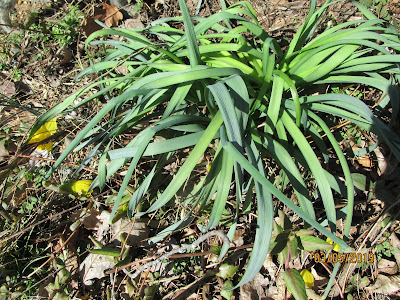 The one bedraggled clump of daffodils on our property. 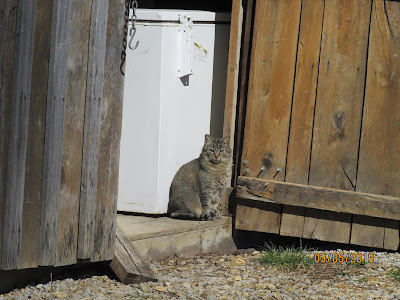 Willis, the intrepid, enjoys a spill of sunlight at the shed door. 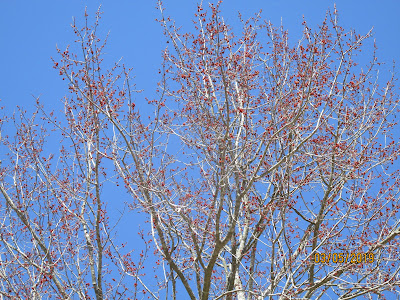 Towering above the shed and marching along the ridge, red budded maples suggest that spring will arrive as it has always done.