Edward-Cat: His Life and Passing 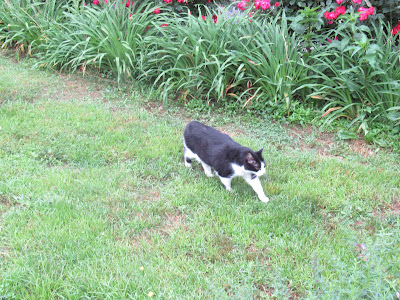 Edward in May 2022 plodding along the grassy edge of the east wall garden.
Throughout the summer he enjoyed hiding in the daylilies, popping out to hurry inside when cat 'tea' was announced.
We buried Edward late this afternoon in the space J. grubbed out earlier at the edge of the woods along the north ravine.
I attempted this morning to prepare a bury hole myself, attacking the dry coarse soil with my garden fork and a shovel. The soil is shallow there and interlaced with the roots of  surrounding trees and shrubs. I quickly discovered that although the ground wasn't giving way with my efforts, my back was protesting mightily.
I appealed to J. as he was ready to launch his current project of sorting tools and oddments in the small barn.  He brought out a pronged tool [maybe intended for aerating a lawn]  twisting it into the ground and loosening the soil which he then scraped out with the big shovel, forming a tidy rectangle.
Edward's appointment with the vet was for 1:45 Central time; As we keep Eastern time I stayed busy with small tasks while clock watching.
J. meanwhile loaded his work truck with things he intended taking to the county landfill. He announced there was no need for two vehicles to go into town foiling my plan to take this final journey with Edward on my own. In retrospect I think J. might have wanted to be part of the farewell.
Throughout his adult years Edward weighed over 18 pounds, a portly creature, amiable and lackadaisical, food loving. At some point early in the summer we noted with surprise that Edward wasn't as plump as usual. In all other respects he was his normal self, but the weight loss continued, accelerating until by August he had become gaunt.
His appetite held steady as did his consumption of water.
Remembering other cats over the years I suspected cancer or feline diabetes, some wasting disease  which could have no good ending.
There may be those who would argue that I should have taken Edward to the vet for testing, scans, possible meds or surgery.
We doctored Edward through three severe UTI's---the last one occurring two years ago. At that time he fought so strongly, biting and clawing at me, hiding under furniture, spitting out meds, that I felt we couldn't go into that routine again for any cause.
In examining him today our vet didn't suggest that any treatment might have prolonged his life.
Sunday brought the first indication that Edward was losing his enjoyment of food.
I hurried to buy little containers of 'gourmet' cat dinners. Offered these on Monday he walked away from his dish with only a sniff at the food, lay down in a patch of sunlight on the floor.
In the evening he ate a tablespoon of strained chicken, almost as though he did it to please me. It didn't stay down.
Edward lay in his usual spot at the head of the stairs this morning basking in the heat we had turned on until the sun could warm the big room.
He drifted downstairs, sipped a bit of water. I opened the door to the downstairs bathroom--a place which delights Edward but is usually off limits. Edward spent the last hours of his life moving between a soft old bathmat and the cool tile floor.  I lined the cat carrier with newspapers and a towel. He  offered no resistance when we gently put him in.
He rode to town in my lap, rubbing his face against my fingers which I inserted through the grilled opening. He kept his large eyes fastened on me, sometimes uttering a soft inquiring meow. 'It will be alright,' I told him. 'Soon you will be alright.'
The vet's appointments were running late. I sent J. on to do his errand while Edward and I sat quietly in a corner of the vet's waiting room. I kept the carrier on my lap with Edward facing me, one hand reaching in to pat him while I balanced a book with the other. He was quiet, peaceful.
The vet asked if I wanted to stay in the room while the needle was given. He weighed Edward--perhaps to calculate the dose of the injection [?]  Our portly boy had lost 9 of his 18 pounds during the course of the summer.
There was no struggle. I held my hand cupped under Edward's chin as the needle was slipped in and felt his thin tired body relax. I had a moment alone with him before the vet made a final check with his stethoscope and helped me to lift the still body into the worn pillowcase I had brought with me.
We gave Edward a good life. We gave him a gentle passing.
Below are some of my favorite photos of Edward pulled from my photo archives. 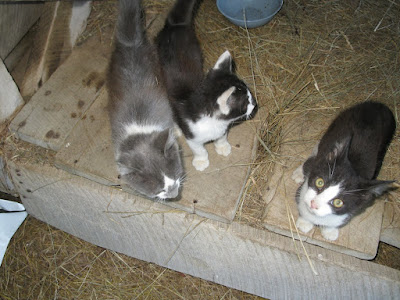 Edward [on the right] and his brothers, Robert and Nellie, were dropped off at the edge of our first Kentucky  property on a late July evening in 2012. We reckoned they were between three  and four months old.
Bone-thin and dirty, they were not feral.
Grandson D. and I were in the dooryard, talking, playing with the barn cats when the three kittens came blundering through the long grass of the meadow that stretched downhill to the road.
They flung themselves at us with anxious 'mews' tumbling about our feet, climbing our pants legs, purring with delight at human contact.
I was dismayed.
We didn't need three kittens.
'Alright,' I announced, 'You can be barn kittens until we decide what to do with you.'
D. and I carried them to the barn, set out dishes of kibble, a bowl of water.
When I opened our back door early next morning the three kittens were asleep in a pile on the doormat.
It appeared they had moved in.
We set about bathing them, naming them, and soon [inevitably] they had house privileges.
They were taken to the vet for inoculations and timely neutering. 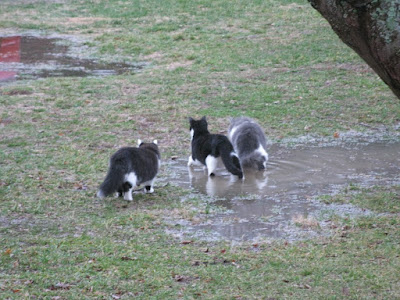 The young cats loved water. Whenever an overnight rain left puddles in the back yard they rushed out to paddle and splash in the water.
Edward brought that love of water indoors with him and until his final days couldn't resist splatting in the cats' water bowl. 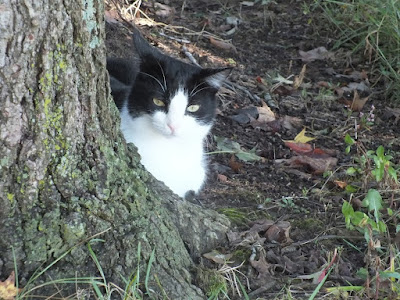 Keeping watch in case a mouse should wander by. 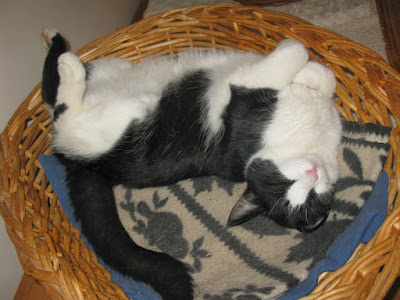 Edward had a lazy demeanor. Next to his love of food was his enjoyment of a cozy bed. 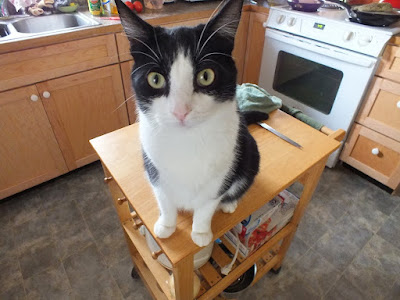 A vantage spot in the tiny kitchen of the G'ville house. 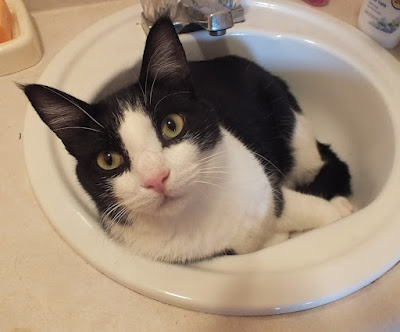 The bathroom sink is cool on a summer day. It would be better if the water was allowed to drip. 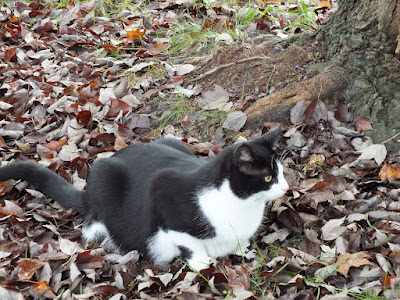 A leafy spot near the west door. 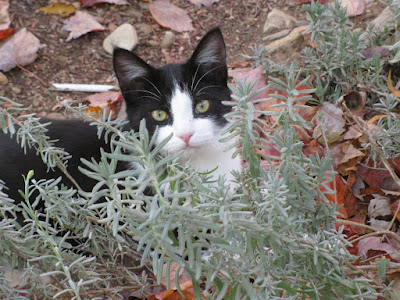 Posing in the herb garden. 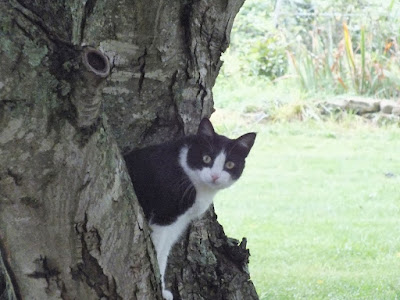 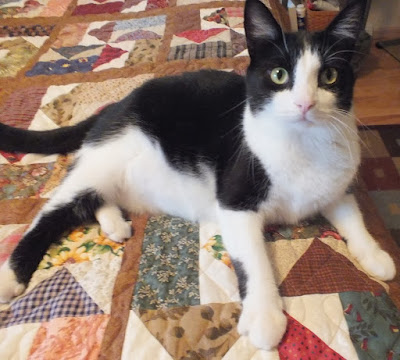 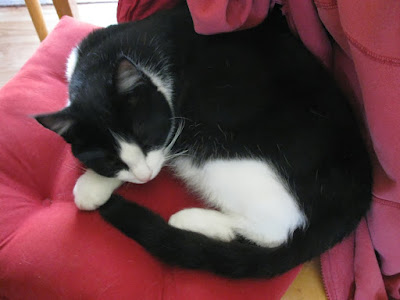 Edward had many of the characteristics of A. A. Milne's iconic Winnie the Pooh. [Not the 'Pooh' of Disney portrayal.]
Like 'Edward Bear' our boy could be said to be a cat of 'very little brain.'
Lacking the adventurous outdoor spirit of his brothers, Edward was lazy, a bit greedy, content to plonk himself in sun or shade for a nap.
When in 2019 we moved into our newly built house after spending the winter in a camper parked by the little barn, Edward repeatedly wandered down to sit on the camper steps, fully expecting there would be someone there to let him in. Called home, he sat there mewing plaintively, seemingly unable to reverse his path and return to the house. I never had the heart to leave him there in his bewilderment, instead trudging down to hoick his heavy self into my arms and lug him up the lane.
Edward sleeps now in the rough ground near the graves of Mima and Charlie.
In the morning I will scatter seeds of blackberry lilies and Michaelmas daisies hoping that some few blooms will grow amongst the mossy stones.
Posted by Morning's Minion at 9:38 PM