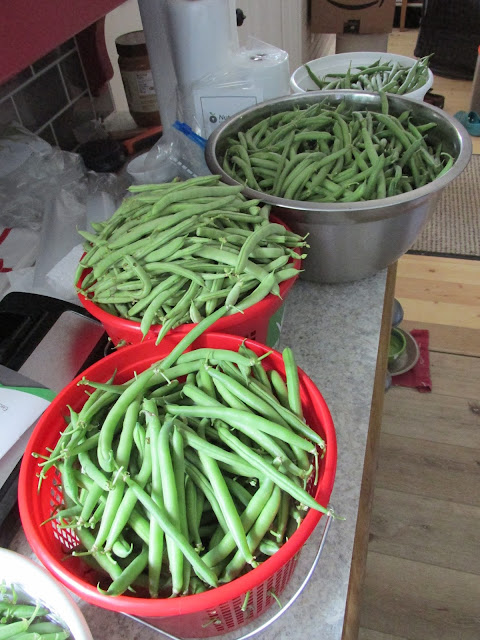 The month of July can be summed up in three words: Heat; Humidity; Harvest.

Dawn and I have been kept busy tending the gardens at both locations.  Green beans outdid themselves before beetles and a spell of dry weather wore them out.

We purchased a vacuum sealer to prepare the beans for the freezer--a bit of a learning curve before we became proficient. 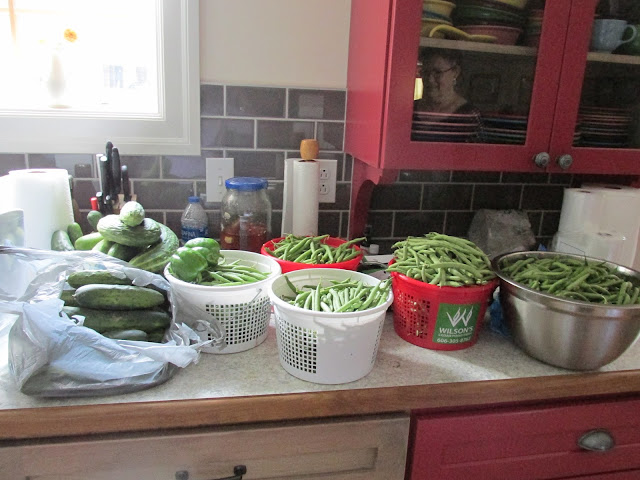 A typical morning's harvest! We soon reached the point of cringing when anyone came in from the garden carrying more cucumbers. We've been giving away some of the excess--some have gone to the Beachy's Fresh Air Produce when their crop slowed down.

Some of the prettiest green beans went into 16 pints of 'Dilly Beans'--recipe supplied by son-in-law, Matt. 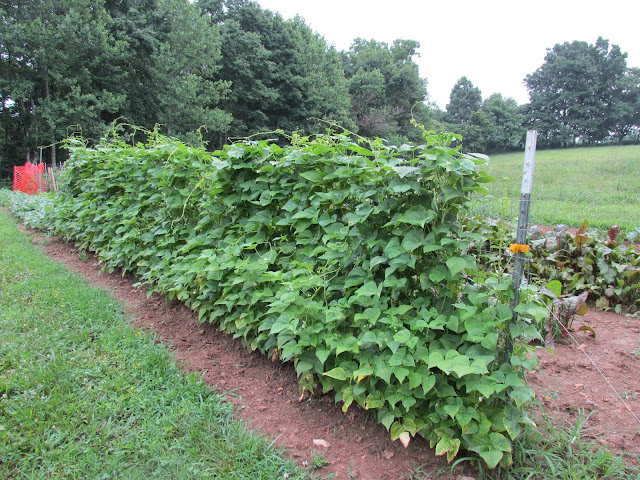 The row of green beans in their glory.   A late planting of beans has since replaced these--bush beans for a fall crop. The beets [at the right behind the bean trellis] have all been consumed. Jim seeded a long row of beets at the Dry Creek property [now owned by Howard and Dawn] as well as a large packet of Sugar Snap Peas which Dawn purchased. He also put in corn, but the germination has been disappointing.

We have harvested tomatoes for the table, but predictably, we are seeing blight damage on many of the plants. We made several plantings of tomatoes of different varieties and hope there will be a late harvest. 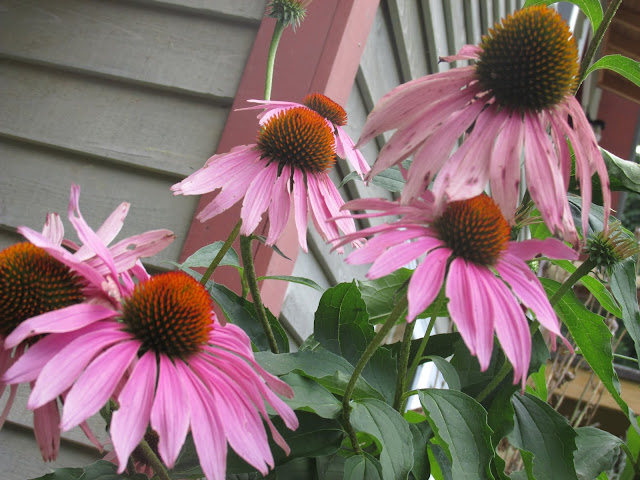 Coneflowers at the corner of the house. These are now past their glory but left standing to drop seeds. 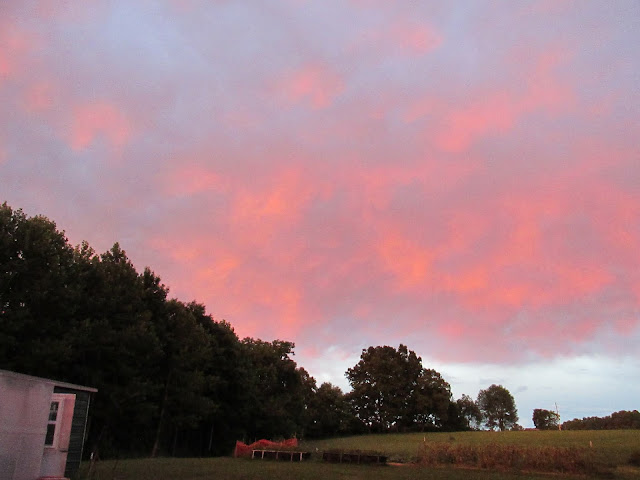 A late July sunset after an evening rain.  A week of intermittent showers brought welcome revival and ushered in a surprisingly cool first week of August. 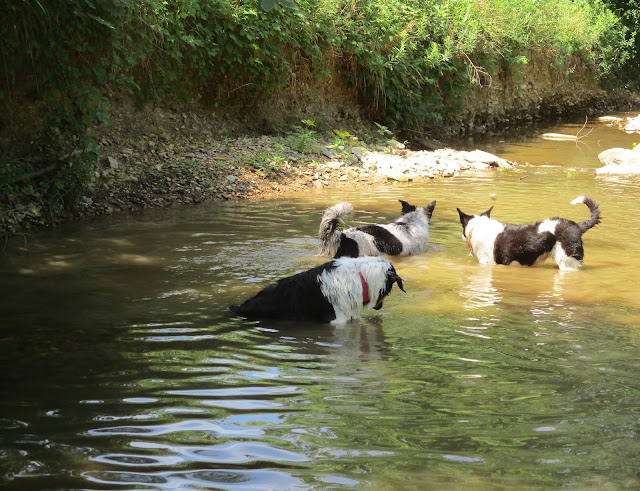 The three dogs go to work at the Dry Creek property each day with Howard and Jim. They look forward to a cooling 'break' in the water. 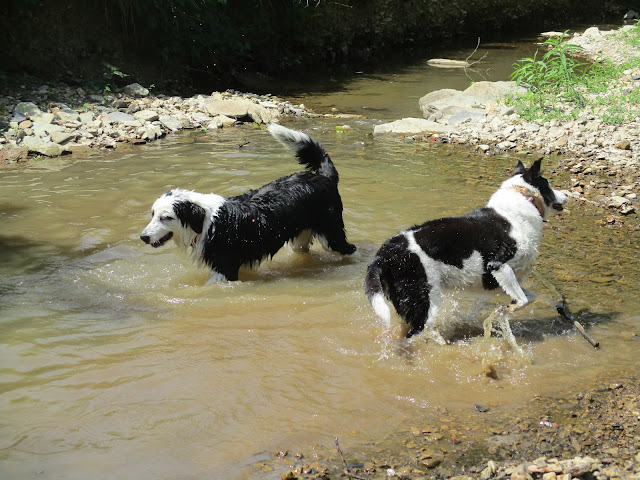 When the dogs are done splashing any humans within range get a shower bath. 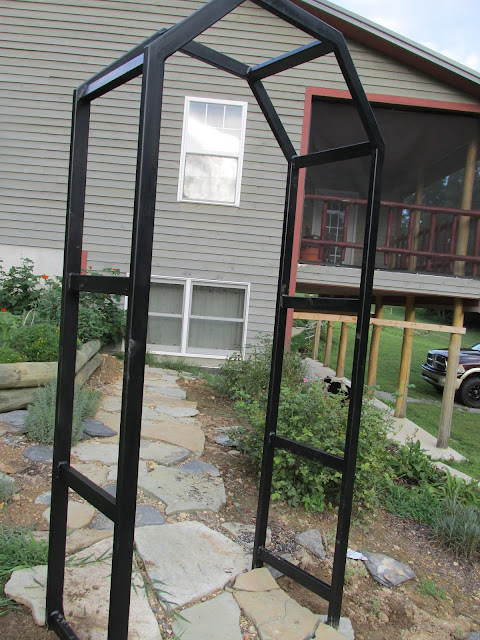 My son-in-law, Matt arranged for this splendid trellis to be constructed for me. The delivery came as a complete surprise. 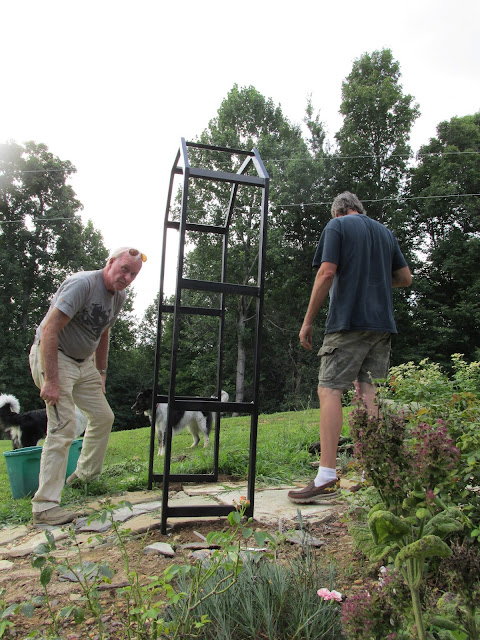 Jim and Howard painted and set the trellis in the newly established garden along the west retaining wall.

My favorite local garden center reopens next week--and a new catalog from a reliable source landed in the mailbox a few days ago, giving me options to ponder. Mexican Torch Flower in bud--grown from seeds included as a 'bonus' with a spring order. 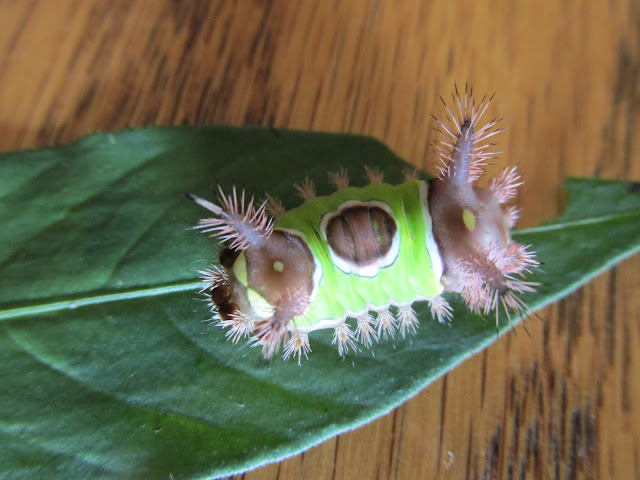 A strange insect encountered while weeding. 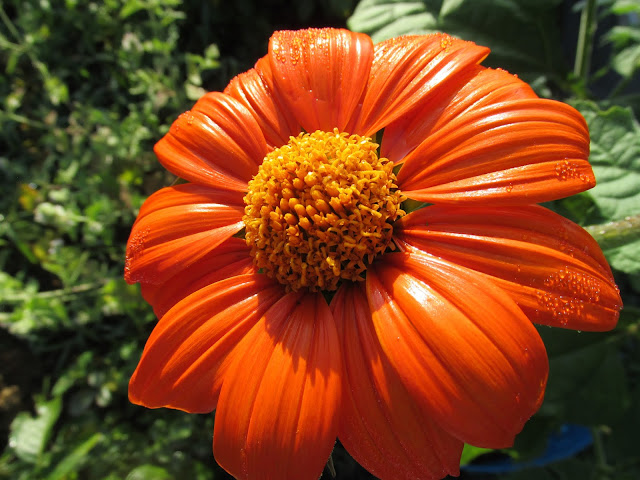 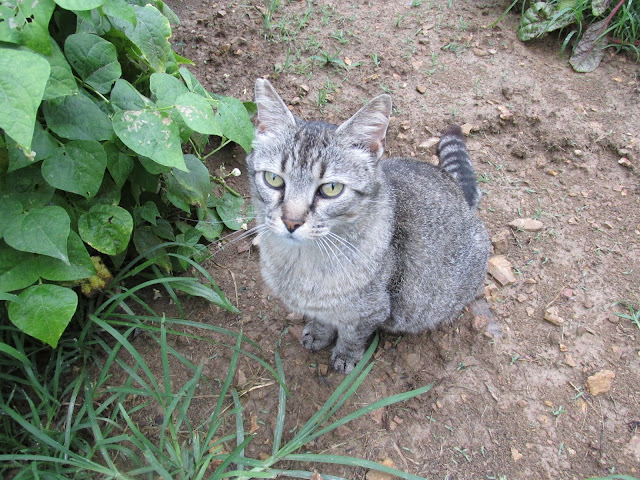 Faithful Willis continues to oversee all gardening efforts.
I spent many hours last week digging and weeding in my various flower borders--tiring work, much of it done on my protesting knees.
The veg harvest and processing has slacked off for now--still a variety of food for the table with the hope of plentiful fall crops.
Summer in Kentucky is not over--surely heat and humidity will return and stretch into September.
The renovation of Howard and Dawn's house continues with Jim assisting.  Howard decided to gut the interior and create an entirely new layout in the upper story. New bracing rafters have been installed upstairs, new windows set in place. A crew arrived last week to insulate with sprayed in 'foam.'
We have all worked to clear and tidy the neglected acreage.
There is little energy left over by the end of long work days.
Life is demanding--and rewarding!
Posted by Morning's Minion at 10:12 PM 2 comments: