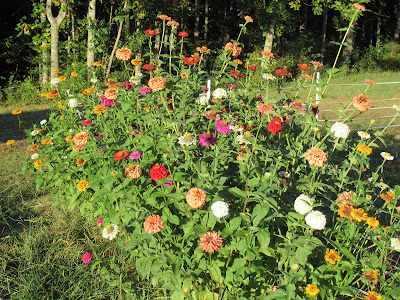 Zinnias on the first day of autumn.
The main garden has a tired and shabby appearance. 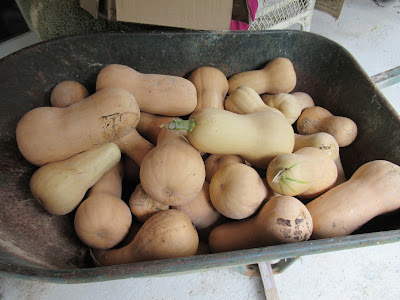 Butternut squash were harvested about 10 days ago and have been stacked in baskets and boxes in the middle basement room. 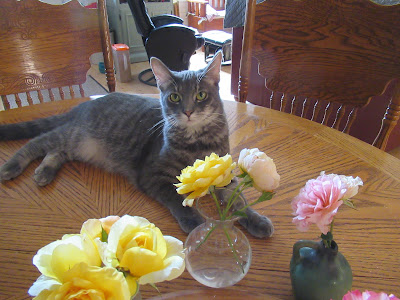 I continue to cut David Austin roses nearly every morning. Some have tattered edges, but their scent it lovely. Rosie admires them. 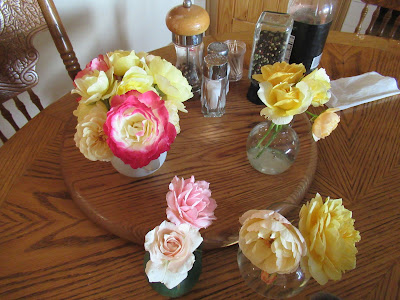 The days leading up to the autumnal equinox featured cool mornings--temps in the mid 50's -low 60's F. but warming up to afternoons in the high 80's.  On 21st September the late afternoon temperature registered at 94 F.
Early in the week I canned the last of the garden produce--some early potatoes which weren't going to 'keep,' the last harvest of green beans, 4 qts of tomatoes shared by M. and G. from their weekly haul at the Amish auction.
The first day of fall began with partly cloudy skies; all day we could sense cooler weather moving in.  By evening it was 64 F.
Next day being brisk and breezy I pegged out sheets and my summer bedspread to flap dry on the back porch lines.  I made up my bed with an old quilted spread in soft muted colors; a fleece throw is folded at the foot of the bed--mostly to benefit the cats. 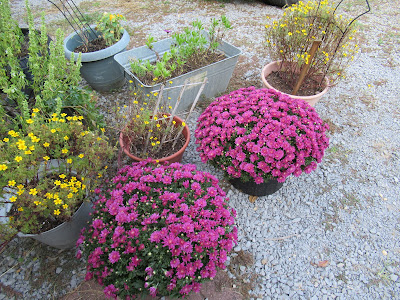 Son-in-law Matt was inspired to purchase mums at the auction--many are bought by wholesalers or those who have small variety shops. Buying at auction is a delight for the winning bidders, but I often think that the growers realize very little profit for their summer of tending the plants.
I chose one in this rich mauve/purple color; Matt insisted I bring a second one as well as a copper hued one to hang on the porch. 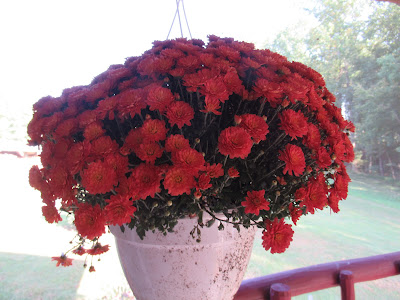 The color in this photo is misleading; the blooms are more of a copper/gold.
A thunder storm roused us at 4:30 on Sunday morning--fierce jolts of lightning, followed by a burst of rain. The day later mellowed into blue skies with puffs of white clouds.
Today has been the sort of autumn day that inspires poets to descriptive rapture: temps in the 70's F. a light cool breeze, sunshine and bright blue skies.
We noted two hummingbirds still visiting the feeders which I refilled with fresh syrup.
I had errands which took me out for the afternoon, shopping at the bulk foods store to stock up on dried beans, pearl barley, tapioca, brown sugar, the farina that J. likes to cook as a breakfast cereal.
I made the rounds of the South Fork neighborhood discount stores, not finding quite as much as usual with which to stock pantry or freezer. Having made a quick foray through the nearest Kroger earlier and noting prices, I'm more than ever glad for our other resources, as well as the garden produce in colorful rows on the shelves downstairs.
I must say though--who knew that cat litter would be in short supply!
I continue to sort things in the pantry, moving bulky items downstairs to the sturdy new shelves which J. and grandson D. assembled for me.
I enjoy this time of transition, the heavy heat of summer becoming a memory, early mornings and evenings when a sweater or light fleece jacket is welcome.
J. looking at the forecast temp for the night has herded cats in from the screened porch and firmly shut the door.
Posted by Morning's Minion at 9:56 PM