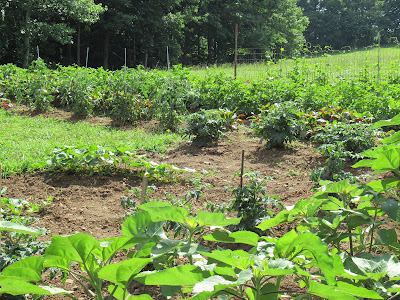 After a slow start due to a cooler than usual spring, the veg garden is inspired by warmer days and rain at just the right time. The soil was starting to dry out on the surface and Jim several times watered the tomato plants we set out on June 8th.
Monday morning the air seemed heavy, there was a restless breeze, but the sun shone.
I worked at setting more plants in the new raised bed, fussed over seedlings in the greenhouse;
I disinterred dwarf monarda from the inhospitable rough garden strip to the more favorable spot vacated by feverfew and nigella which had become too boisterous for the narrow raised bed that flanks the front entrance.
We set out the last of the tomato plants raised from seed in our greenhouse, harvested a colander of young beets. I discovered the trailing yellow stems of parasitic dodder weed at the edge of the beet row, gathered up the strands and put them in the burn pit.
I first encountered this strange pest two years ago draped over weeds and wildflowers alongside the shed at the end of our lane. Last summer it festooned itself along one edge of the rough garden.  I suspect it can never be entirely eradicated in an area, but if discovered fairly early what can't be picked up can be sprayed with a vinegar solution.
I started drenching the affected beet plants, then decided to pull the beets in that area and keep a watchful eye for any further invasion.
Jim keeps the garden well tilled and hoed to discourage weeds.
Gardens are a labor of love--each season brings a few unpleasant surprises in terms of weather, blight or pests.
By the time I had showered, done some computer work for Jim and retreated to the east porch with a book, grey clouds were surging about and the branches of the trees along the drive were whipped by an increasing wind. A tentative mist of rain, a mild rumbling of thunder, then a pause before wind-lashed rain and rapidly cooling temperature drove me indoors.
The cats don't like rain, especially when heralded by thunder. Several who had been lounging on the porch hurtled through the sunroom to pile on beds or take refuge in darkest corners.
I settled with my book in one of the leather chairs near the east windows with a glass of iced tea to hand and Teasel-cat on my lap. 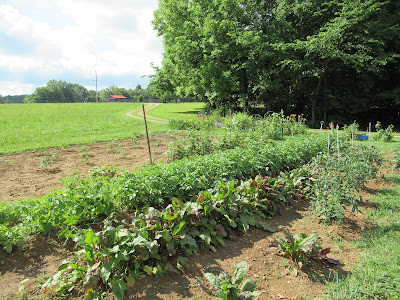 It rained much of the afternoon, a few hard bursts, alternating with the kind of steady showers which refresh rather than flattening the garden. 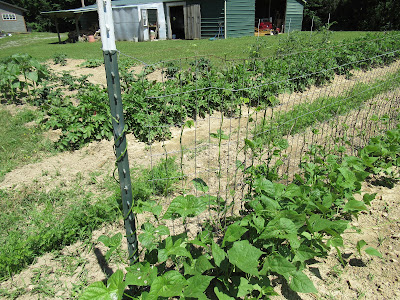 Blue Lake beans climbing their fence, with a row of potatoes in the background beyond the impossibly thickly crowded carrots. 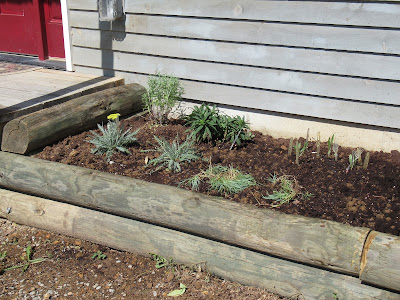 Beginning to plant the new bed. Nursery plants--an autumn aster [Grape] Russian sage, grey-leafed yarrow. Looking fragile are blackberry lilies, yellow coneflower, aromatic aster--all small seedlings from my greenhouse.  These plants were intended for the wildflower garden I hoped to establish under my west bedroom window, a project that is physically beyond me just now. I will pot on some of the seedlings and hope that by fall I am able to work on that small plot. 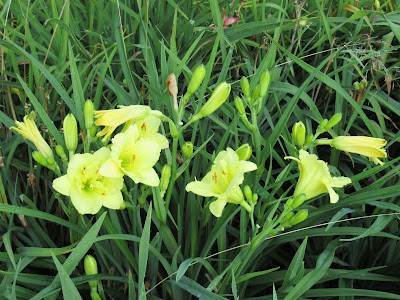 Working on three early mornings last week I pruned back the roses and foxglove on the east and west retaining walls. Japanese beetles have arrived and cluster on the few remaining buds. Daylilies are blooming, the stalwarts of summer weather, seemingly untroubled by the beetles. 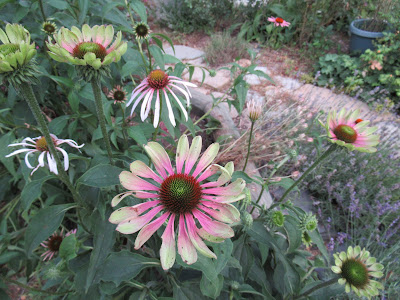 Coneflower "Twister" raised from seed last summer, interplanted with pale prairie coneflower.
Sadly these are not impervious to insect damage. 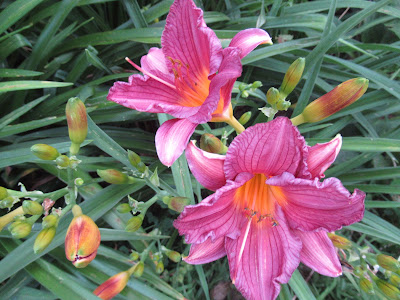 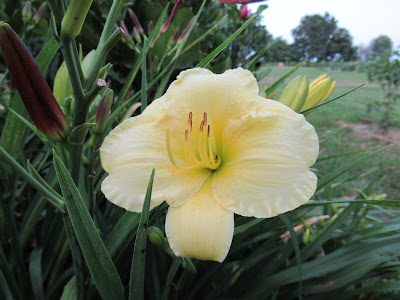 Daylilies in the rough garden strip. They seem able to cope with heavy soil and weeds.
In the three seasons we've been here I've laboriously weeded and mulched that strip--a thankless and exhausting task that is now beyond me.
I plan to move some of the plants, leaving only the larger spreading kinds to tough it out.
Posted by Morning's Minion at 10:17 PM