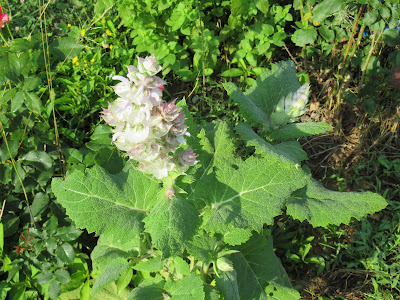 Clary sage. The single survivor from last season's seed-raised crop.
A biennial, so left in this weedy spot to flower and hopefully provide me with seed for another year. 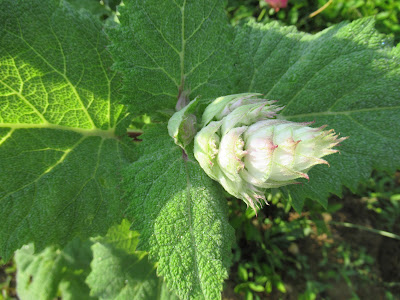 The coarse leaves of clary have an astringent sharp scent, but the flowers are pleasant. The buds are particularly fascinating. I have three very tiny plants in the greenhouse which I hope will be ready to set out late in the summer. 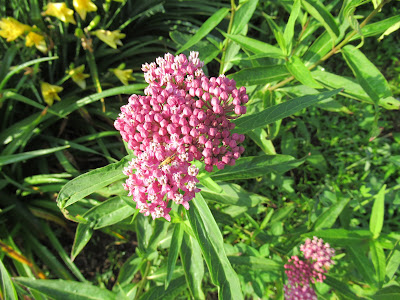 This milkweed is a more refined form than the common wildling. It is loved by butterflies and when the monarch caterpillars discover it the plants are quickly gnawed to naked stalks. 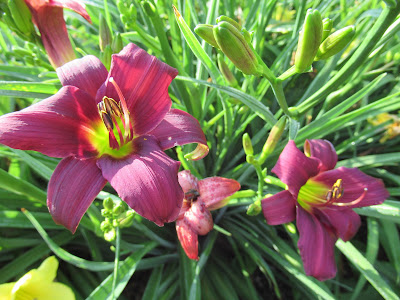 When the peonies have been shattered by rain and the early roses are succumbing to Japanese beetles, daylilies take over. 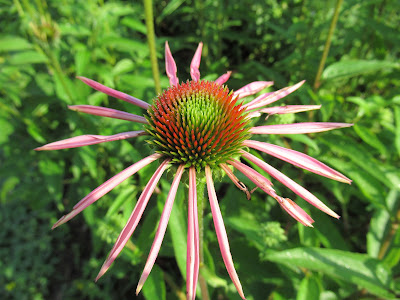 Echinacia/coneflower in its simplest form--sturdy, dependable, holding its own in the rough garden strip. 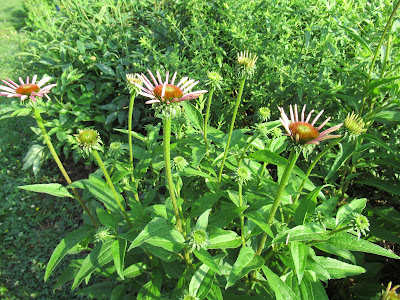 Echinacia backed by aster.
In other gardens I've set out nursery purchased exotic forms of coneflower, never as hardy and self-perpetuating as the generic. 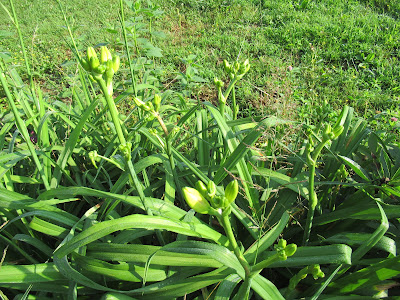 Buds on the double orange 'ditch lilies' originally dug up along the Old Gradyville Road and moved with me first to the Amish farm and then to the new house. 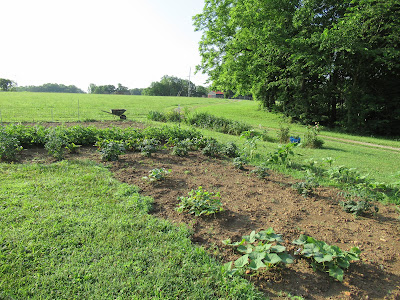 The veg garden has flourished in the recent gentle rains. In this plot are Better Bush tomatoes, a hill of muskmelons [purchased plants] and cucumbers. Dwarf sunflowers edge the far side of the plot. [Planted for me by Jim before I was able to work outside.] 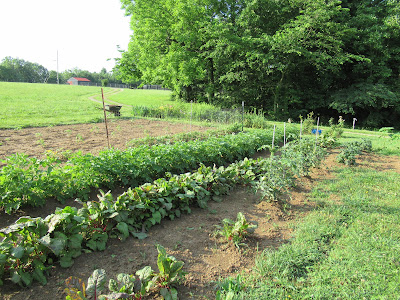 We've had two meals from the Swiss chard. Beets will need to be thinned. Jim has staked the Carolina Gold tomatoes and put up the fence for the Blue Lake beans to climb. Blossoms are appearing on the potato plants. We didn't buy seed potatoes, but salvaged some that sprouted in the pantry. A row of carrots is badly in need of attention--carrots are a frustrating crop. Jim used his seed planter which has metal disks sized for a variety of seeds--the carrots, never-the-less, went in much too thickly. 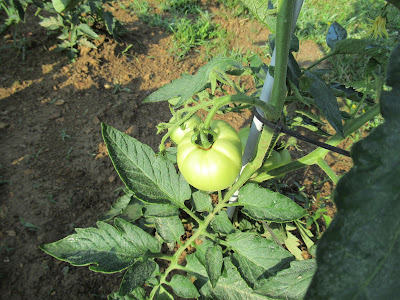 Carolina Gold tomato.  We've been applying a fungicide to the tomato plants about every 10 days in the hopes of holding off the usual devastating blight. Frequent rains since the last application may have rendered it useless. 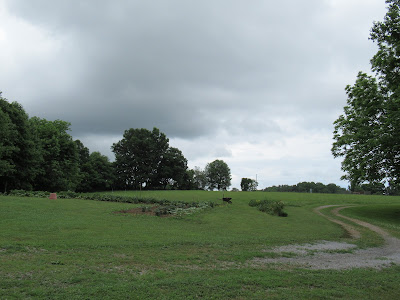 Rain came in bursts nearly every day during the past week; looking across the meadow the view was of gathering clouds; the pattern was showers lasting 10 or 15 minutes, followed by steamy sunshine, then another shower.

A brief downpour made way for a fiery sunset. 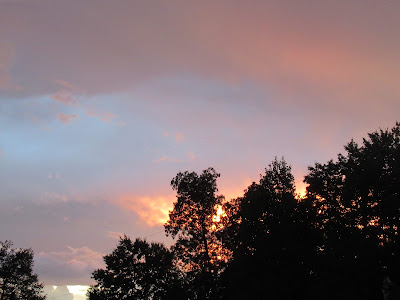 Smoky orange, a streak of blue, a quickly changing palette of grey, lavender and apricot surrounding the sun as it sank into the ravine at nine o'clock on Thursday evening.
Daybreak Friday brought crashing thunder, pounding rain, power blips, before the weather settled for a steady rain through the day. The air has been heavy with humidity and heat--thankfully a later occurrence this season than is usual.
Steamy sunshine on Saturday with a thrashing wind and another brisk shower at dusk.
It was damp this morning, but sunny. I cut back the roses on the east wall, trimmed most of the nepeta. The pinks that edge the west wall are next on the list--already sending up fresh growth in the center of the withered clumps. Foxglove is going shabby and needs cutting down, perhaps leaving a stalk or two to set seed.
The beauty of flowers is transitory, easily blighted by unfavorable weather, subject to ravages by insects. The roses had a good flush of bloom, most of the peonies came on before the rains, the clematis have been a joy. Nigella seeded itself with a vengeance, swallowing last year's clumps of balloon flower. The thyme edging the raised bed in the west garden was hardy through the winter and spread lavishly before being blackened by too much moisture. I've pruned away damaged stems, but not feeling very hopeful for its survival--it doesn't like wet feet.
Still potting on seedlings in the greenhouse, disentangling the roots of pot-bound nursery purchases which I hope will revive when they can be situated in the new raised bed which is a work in progress.
Posted by Morning's Minion at 9:28 PM