The Flowers of May 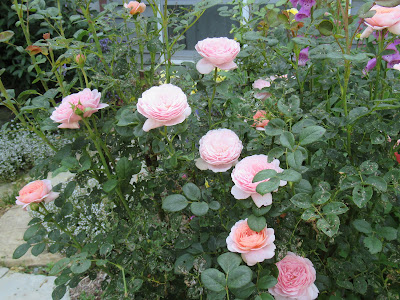 May in south-central Kentucky is a time of flowers.
In my garden this means peonies, iris, foxgloves, as well as a first flush of bloom on clematis and roses.
In spite of damage to the leaves by sawfly larvae, my David Austin shrub roses outdid themselves in this third season since planting.
Above is Queen of Sweden, a very stately upright bush. 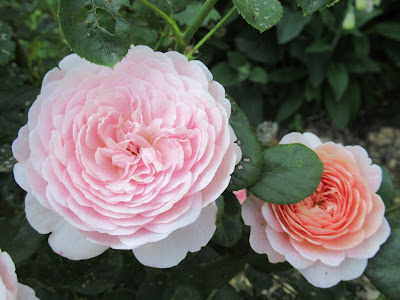 Queen of Sweden and Roald Dahl. 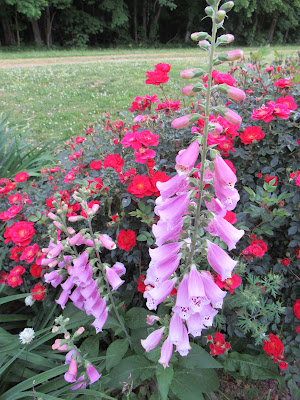 A planting of Double Red Knock-out roses anchors the south wall garden. Most of the seed-raised foxgloves tucked in front are shades of rose pink--probably offspring of the variety Camelot. 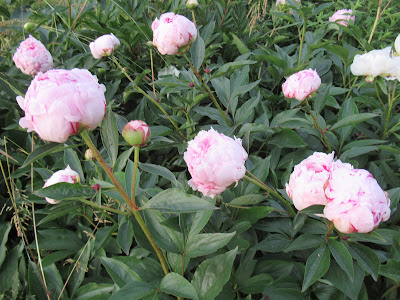 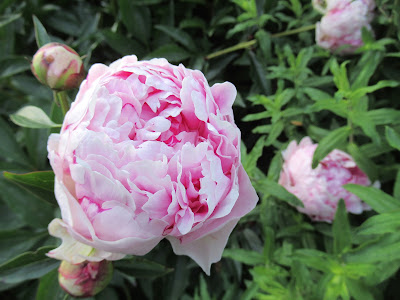 Crowded near the peonies is an aster that will bloom later in the summer. 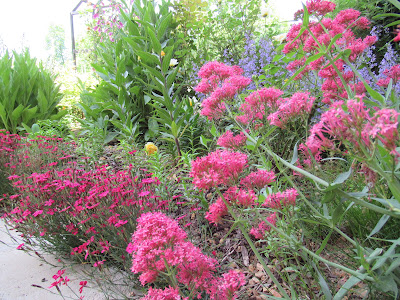 Red valerian leans out from the house corner on the west retaining wall. Miniature lilies have been moved on from two earlier gardens. The edging of pinks were seed-grown last season. 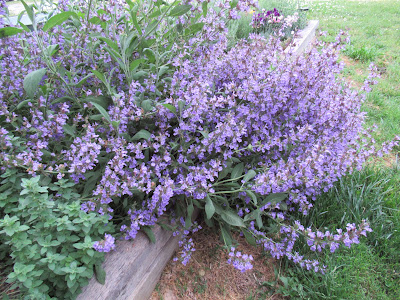 Common sage tucked into the raised bed by the front steps outgrew its space, probably because the bagged soil used in the bed is too rich for most herbs. The plant should have been pruned about the time that I was 'laid up' with the DVT--by the time I was on my feet, I decided to allow the rampage of blue to run its course. 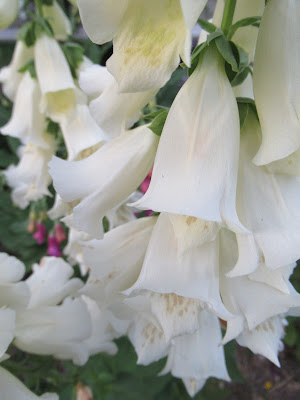 A white foxglove with pale freckles. The 'Sutton's Apricot' foxgloves which bloomed last year near the white ones made no appearance this year. I'm hoping that a few of the potted on seedlings lifted in late January will prove to be that variety. 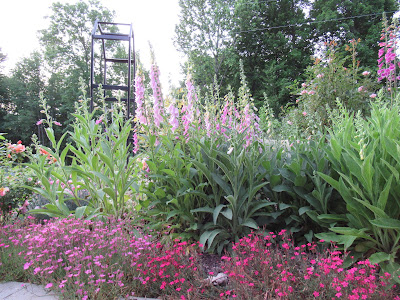 The west wall garden with pinks in full bloom, rose and lavender foxglove. 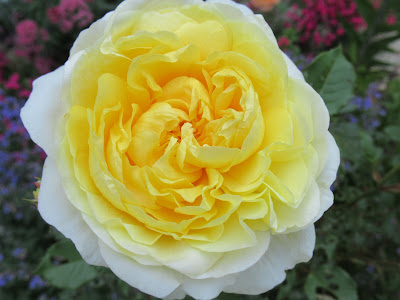 I lost the tag for this lovely David Austin rose; I think it is The Poet's Wife. In previous years few of the buds fully opened. This year there has been a profusion of these frilly blooms which have a refreshing citrus scent. 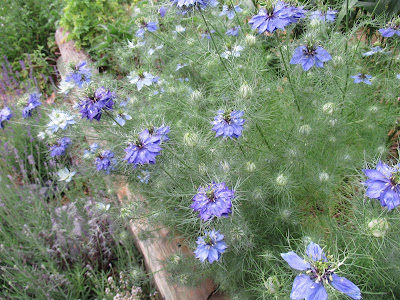 Plants which self sow can be a delight--or they can become vigorous interlopers.
Nigella seedlings should have been thinned early on; they took over, completely swallowing several plants of platycoden/balloon flower which is slow to emerge in the spring. Nigella happily produces several 'crops' of bloom in a long Kentucky summer and reappears to do it again another year. 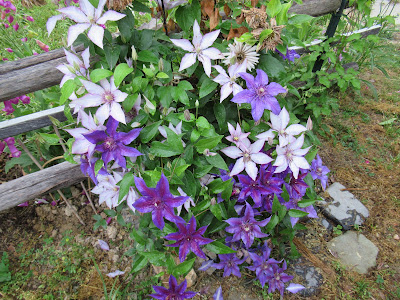 Clematis plants Samaritan Jo and Edita were meant to share a trellis. I had no idea both would explode with a tangle of blossom the year after their planting. These two had a rough start in 2020, being uprooted several times by a belligerent racoon just days after they went into the ground. 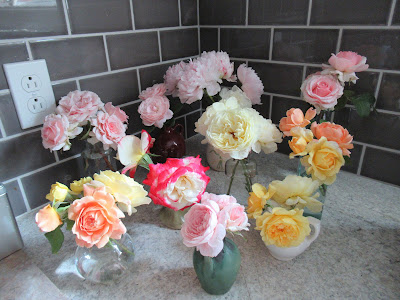 It has been a joy to bring in roses and peonies during their brief time of glory.
I have run short of tiny jugs and bottles to hold them.
Scooping up fallen petals is a small price to pay for this corner of scent and color.
I would like to display some in other spots--on a bedside table or a corner of my desk.
The resident cats take too great an interest in bouquets!
Rainfall was sparse mid-May, not quite reaching drought conditions but dry enough to have us hoping for showers. It was perfect haying weather. Tractors and hay wagons lumbered along the country roads, huge round bales dotted the shorn meadows. The sun-warmed smell of sweet clover and meadow grass mingled with the aura of blackberry, honeysuckle and the invasive rosa multiflora.
The rains arrived in the early morning hours of 28th May and continued until the sun reappeared on Sunday. Slow rain, falling in bursts, dwindling, streaming down again bringing chilly nights and days of green darkness.
The peonies and roses, slightly past their best, bowed to the ground, heavy-headed.
In the vegetable garden beets, carrots, potatoes, green beans, all revived and grew with tremendous energy.
After a blue sky day of sun and wind on Sunday [in time for a family picnic!] the weather has again brought spotty showers.
I've pruned away the shattered peonies and roses, dead-headed the Knock-Outs--an ongoing chore.
We are grateful for the gentle rains, for the postponement of high temperatures which so often begin to overwhelm before the end of May.
The time of spring flowering is over for another year. In the next few days I need to work at cutting back tired plants, weeding.
As we move into June the daylilies and the container plants will take over the task of providing color.
A number of things are growing on in the greenhouse, waiting on the completion of the new raised bed under construction by the front door.
My gardens will never resemble the photos that appear in coffee table tomes or alluring seed catalogs.
I will never have sufficient energy or time to give the best of care to my plantings.
Beset by weeds, insect pests or struggling under my benign neglect, my gardens continue to delight me.
Posted by Morning's Minion at 9:12 PM