Winter For A Day 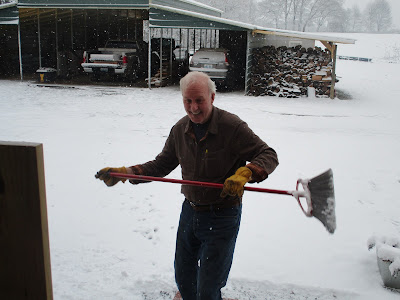 Jim was mumbling about the weather forecast last evening, but I was still surprised to note the pre-dawn  white-out seeping through the window blinds.
I've been no farther than the back porch, taking out morning kibble for Willis and Sally.
Jim has trudged out and back in several times, sweeping the front steps, getting in firewood.

I was trying to talk myself into pulling on my wellies and checking the temp in the greenhouse.  My only real concern there is the big rosemary and the lemon verbena which I pruned heavily before taking it out last week.
The sophisticated digital 'weather station'--an appreciated gift from Howard and Dawn--notes the outside temp standing fast at 28F.
Jim looked in on the greenhouse and returned to assure me that the thermometer in there is holding at 10 degrees higher than outside. 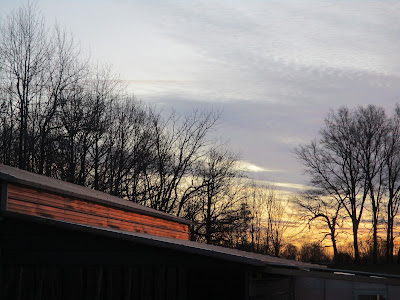 We welcomed two beautiful sunny days earlier in the week after a spell of fitful drizzle.
Skies at mid-day were bright blue, a flock of robins bounced over the grizzled grass of the field.
I popped out to the greenhouse to tuck a few broccoli seeds into a plastic starter cell, trudged down to the bottom of the lane to assess the fuzzy buds still tightly closed on the 'Jane" magnolia. I've noted tiny leaves on the pruned back roses--and then scuttled back indoors as the wind was sharp. 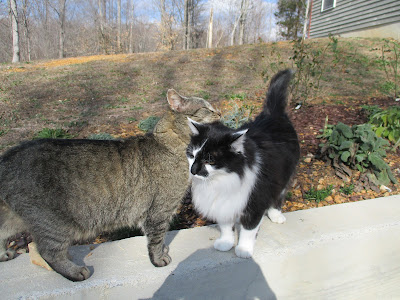 Willis and Robert communing on the west retaining wall.
Note the thriving little plants of 'pinks' which are flourishing at the edge of the wall.
I managed to salvage only a baker's dozen of tiny seedlings from the many which germinated.
They seem to have settled in to grow in cold weather. 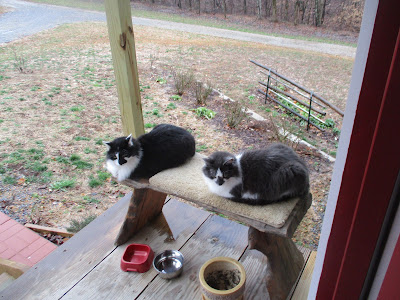 Brothers, Robert and Nellie, sharing the rustic bench on the front porch.
Foxgloves grown from seed last season have remained green, in spite of going into the ground  near the McGyver fence in late autumn--after we finally had rain. 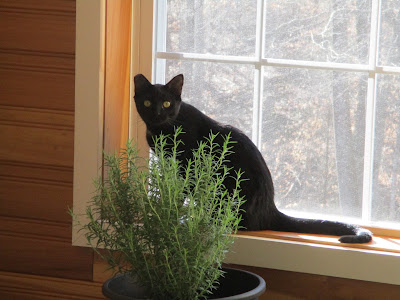 Mr. Clancy, since his rescue from the courthouse parking lot, has been an indoor cat.
He moped about for 24 hours after his necessary 'alternation'--but quickly reverted to his busy mischievous self.
[His ear was cropped when we found him; I wonder how that happened.] 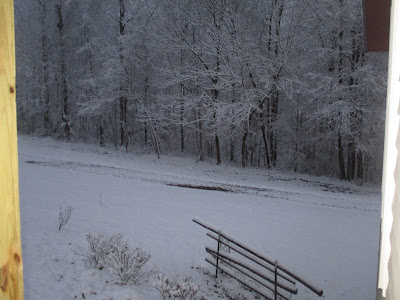 The view this morning from the back porch a bit before 8 a.m. 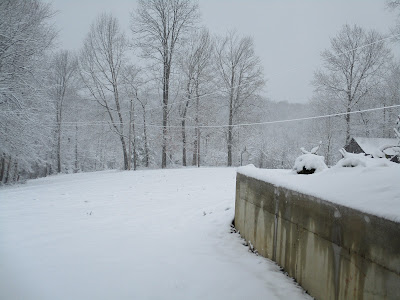 Wet snow is heavy on power lines and tree branches.  Area schools, already closed due to wide-spread illnesses, have hunkered down for a snow day.  Most county offices are closed as well. 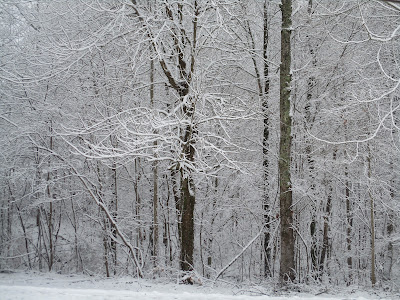 The view across the lane into the south ravine. 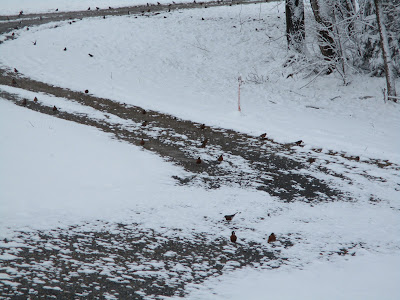 Jim alerted me to the presence of robins by the dozens--maybe even by the hundreds--picking at the gravel beneath the slowly melting snow of the lane. 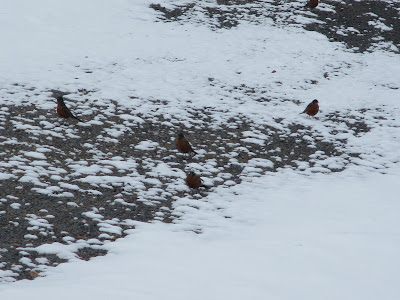 I would like to feed birds through the winter--they are a delight to watch--but it would be unkind to lure them within range of our predatory felines.

I continue to work on family research for a friend, and have two more genealogy projects I hope to finish this month--in-so-far as a family research project can be considered complete.

I'm still using my Windows 7 desktop PC--a month past its cut-off date for support.
The self-styled 'geek' at the local computer shop built it for me about 6 years ago.  He thinks he likely left room for an upgrade to Windows 10.
I need to transfer some files in progress to my laptop, others to flash drives, and ask him to remove photos and such to an external hard drive to be restored to the updated unit.

I have a new book!  It arrived in yesterday's mail and I have several others on order.
I'm not allowing myself even a glimpse at the pages until I've wrapped the current project.
I read too fast--but there it is--a trait that is beyond my control!