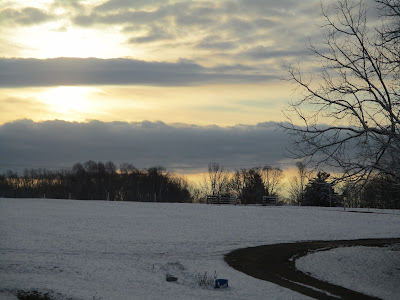 Photos taken and saved for a blog post on Saturday, 8 February.  Since this has been the only sunny day in another stretch of darkness and drizzle, it seems good to record the event however belatedly. 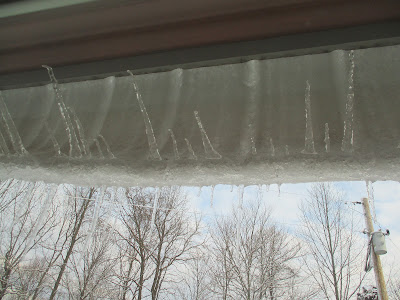 A curving cornice of ice seen through the bathroom window. 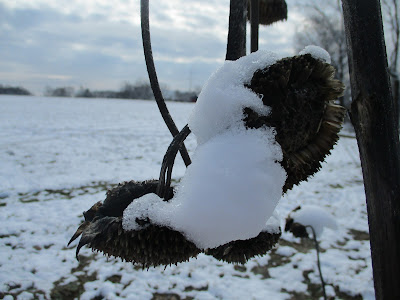 The sun had broken through by the time I pulled on boots and my warmest old jacket to venture on a walk-about.
Heads of dwarf sunflower still contain seeds; later I noticed a bluebird perched on a stem, picking out the nourishing morsels. 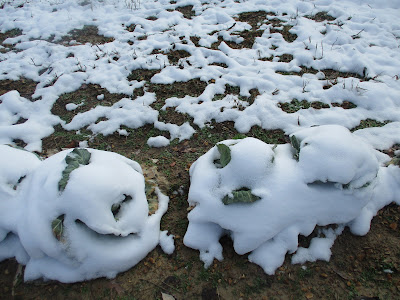 A few unharvested cabbages huddled under a coating of snow. 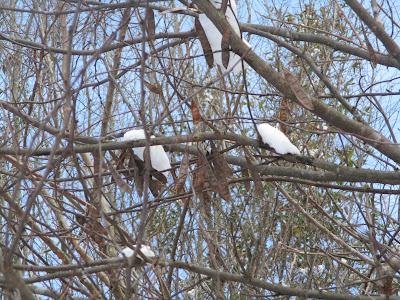 Snow clinging to clustered seed pods of a redbud tree at the edge of the wooded ravine. 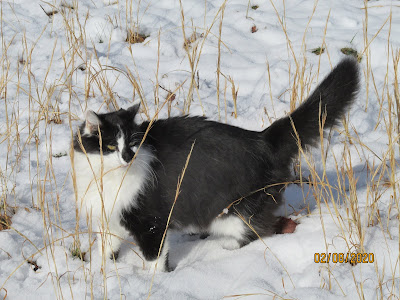 Robert aka Bobby Mac, insists on going out in all weather. He bounced through the snow, keeping me company. 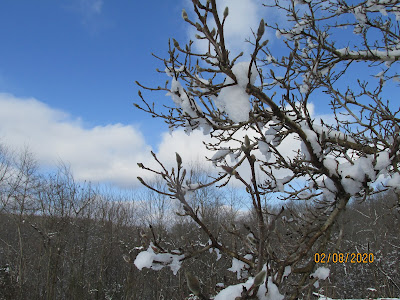 'Jane' magnolia planted by former owners near the house that burned several years before we acquired the property. 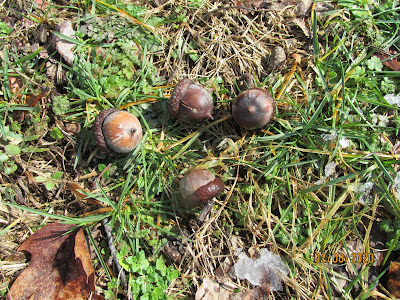 By noon the snow was melting.  I nudged these acorns into a heap, the better to admire their colors. 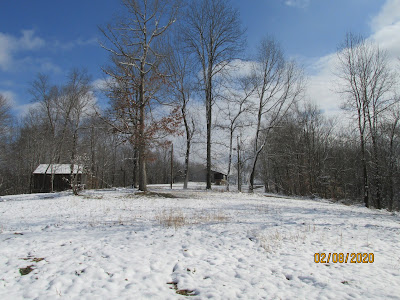 Looking east up the lane from the lower edge of the property;  the two camper trailers which last winter housed us and our son [with his dogs!] were parked in the cluster of trees to the right of the shed. Our new house is sited on a bit of a knoll visible up the lane.
The snug house is a delight!

Rain returned with a fury on Sunday and has been with us through the week, sometimes a mere cold drizzle, but often pouring down in force driven by gusty wind.
Forays into the weather to tend the cat litter box or take out kitchen trash have been a matter of watching for the rain to let up, then dashing out,  returning to the warmth of the house wind-blown, chilled and damp.

During this house-bound time I edited and printed the pages of a family research project ready to mail to a friend.
I moved a few files-in-progress to my laptop and set about dismantling my trusty old Windows 7 PC which has chugged along a month past the cut-off date for support.
I appreciate having the laptop, but it isn't what I'm comfortable with for daily use.

The ever helpful man at the computer shop steered me to what he calls an 'intermediate' model, Windows 10----what I would call a 'hybrid' design.
The workings are contained in a large 'screen,' but there is a separate keyboard which sits in the pull-out tray of my desk.  This is far more comfortable than typing on the laptop keyboard.

Thomas, who refers to himself as 'the computer geek' transferred my files from the old to the new PC at half the usual fee!
I've had to collect, and in some cases change, passwords, make a few changes to personalize the unit.  I'm not happy with the arrangement of photos but have conceded I will figure this out later.  I will!

There will be no excuse for a heaped and untidy desk; the PC 'tower' and monitor, the squatty pair of speakers, gone!

The  weather promises temperatures tonight in the high teens, so I have lugged the large rosemary and the languishing lemon verbena back to the house, along with the recently potted and thus far slumbering amaryllis bulbs.
I spread a burlap sack over the trays planted to seeds. I noted that in spite of cool damp days in the greenhouse the broccoli seeds are sprouting.
It may be that when warmth and sunlight favor us some of the other seeds will germinate--perhaps not, as they were packets from other years. 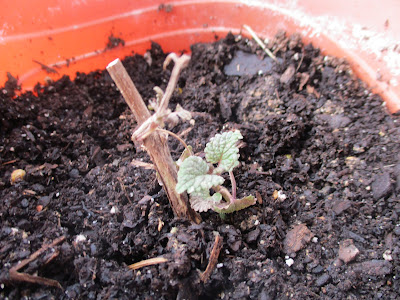 Three of the four clumps of roots scrabbled from the edges of the lemon balm have settled in and unfolded tentative leaves, so there is the promise of  new plants.
Eventually spring and gardening time will come round as they always have done.