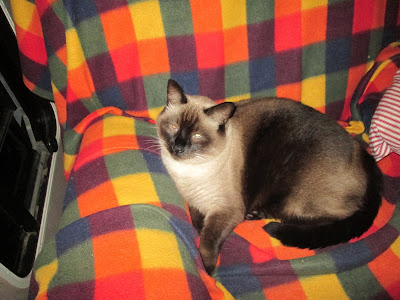 Chester-cat is not bright. Intelligence, savvy--however it might be labeled is not a quality we should have expected given Chester's background.
Chester, his parents Charlie and Maisie, his sister Jemima, were rescued from a neglectful situation on the Wind River Indian Reservation and delivered to the Lander Wyoming Pet Connection in autumn of 2008.
My SIL, Matt, saw a poster of the kittens and declared that I should adopt them.
When a month passed and no one claimed them, I visited the shelter, bundled them into a cat carrier and with a feeling of resignation paid the adoption fee and brought them home

Fast forward two months when time was running short to home the parents, Charlie and Maisie.  Because I often donated food or funds to the shelter, adoption fees were waived and the feline family was reunited.

From the first it was evident that Charlie was a 'people cat.'  He was [still is]  loud, gregarious, a boisterous clown.
Maise was a sad creature, weary, given to walking about the house wailing like a lost soul.
Her teeth were bad, her tail had at some point been broken.  We suspected that she and Charlie were likely too closely related to have produced a litter of 'normal' kittens, the bad treatment on the Rez not with-standing.
We did what we could for Maisie; she had been spayed at the shelter, we fed her well. Her health deteriorated badly when we had been about a year in Kentucky and the most merciful solution was having her put to sleep. 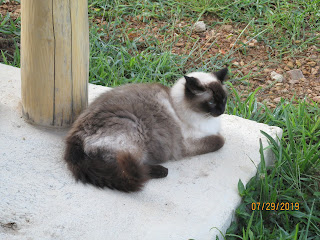 Charlie [named 'Otis' at the shelter] learned the joys of being an indoor/outdoor cat.
It took him a good deal of demented dithering and 24 hours spent in a tree from which he had to be rescued. A revolving door would suit him well as he likes to come in one door, then stomp to the other demanding to go out again. 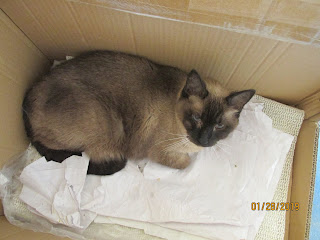 We lost Chester's sister, Jemima, early in February, after several rounds of antibiotics failed to deal with a mysterious wasting illness.
Mima was shy, velvet-furred, a lap sitter, a cuddler.
Like her brother she was not endowed with any common sense.
Mima got outside twice at the farmhouse and immediately lost her head. When we approached her, coaxing, her eyes rolled  wildly, and as we drew closer she scooted away, darting behind shrubbery, crouching out of reach beneath the car.
We eventually caught her by setting a saucer of tuna in a Hav-A-Hart trap. 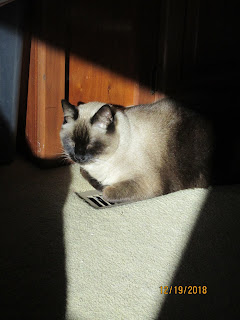 Chester, lodged behind a chair in the camper where we--and the cats--spent the winter of house building.

Chester takes the prize for witless behavior.  As a young cat in Wyoming, he several times hurtled out the front door and flung himself under the low porch that ran along the front of the house. Flattening myself on the ground, aiming a flashlight into the darkness I could see him beneath the porch. Sometimes he replied to my calls with a plaintive mew.  Mostly he huddled, staring and refusing to come out even when the night grew cold. It was as though on exiting the house he lost all sense of domesticity.

On the third day of his self-imposed exile I removed the screen from the porch window that opened into my sewing room and leaving the window raised, shut the door into the rest of the house. Why he chose to eventually slink from under the porch and creep in through the window, is beyond reason. 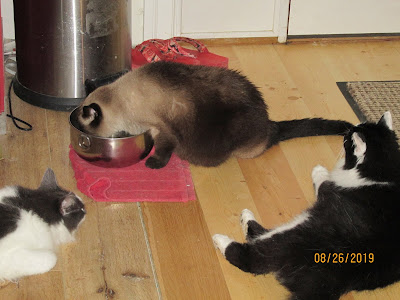 During the past two weeks we have been opening the front door early in the morning to look out over the mist-swathed meadow, watching for the first rays of sun to peek round the barn.

The cats, Chester included, wander out to sit on the steps. Chester is quick to dash back inside, seemingly convinced that bogeymen are lurking.  Once he walked around to the back of the house and forgot how to make the return journey to the door.
Jim discovered him and was able to carry him to safety.

Yesterday after closing the door  against a burst of rain, I realized Chester hadn't come in.
Chester's only use for me is to sleep in a heavy lump by my knees once the bedroom light is out. Only at such times am I allowed to stroke him.
In a sociable mood he courts attention from Jim; when Howard was with us to build the house, Chester developed an affection for him, rubbing round his ankles, wanting to be brushed.
I am viewed as a menace. 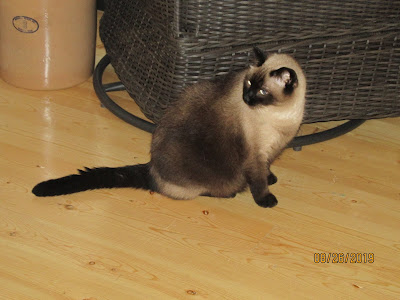 I spent a good deal of time yesterday searching for Chester, plodding about between rain showers, peering into dim corners of barn and shed.
I went out again at nearly midnight, aiming the beam of my flashlight toward any likely hiding place.
I felt concern for him spending the night, supperless, outside.
I was out again this morning bundled against the rain, calling the wretched cat.

In the barn, the side aisles are still a clutter of bins, empty boxes, tools, as well as three tractors, the riding lawn mower, the 4 wheeler.
I moved a big packing box, crouched to look behind a large feed bin left by the former owners.
There, wedged beneath a stack of staging, I spied Chester.
He might as well have been deaf for all the response he gave me.

I hauled aside the Troybilt tiller, edged around the bin.  Chester's eyes glowed red in the gloom.  I expected that he would bolt.
I went creakingly to my knees, reached cautiously under the staging.  My right hand made contact with his fur, but he is so stout that there is no 'scruff' to grip. I got both hands round his middle, began gently to haul him out.
Finally I had him--and surprisingly he didn't pee on me!

Hoisting myself from the gravel with both hands full of a cat who weighs upwards of 15 pounds was a feat of contortion and balance.
Once inside Chester went immediately to the water bowl.
He eyed the other cats as though they were complete strangers. If I moved toward him he scuttled behind the furniture. 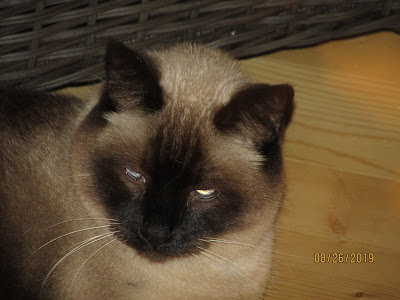 On this dark and rainy afternoon the cats have drowsed quietly on cushioned chairs and sofa.  Even busy Charlie is content to nap.
Chester has appropriated Jim's recliner. If I walk past he twitches nervously, opens a beady blue eye.

I'm reminded of John Cleese in the role of village idiot--a trait apparently passed from one generation to another.
It is well that this family of eejit cats was not allowed to continue the line!

Posted by Morning's Minion at 6:01 PM