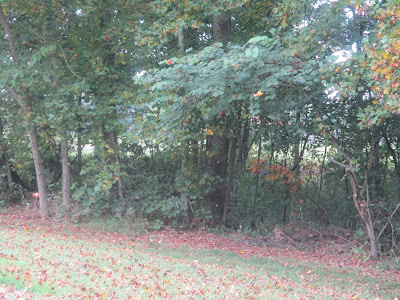 Movement beyond the window, across the lane, caught my eye.
I watched as tree branches tossed in a sudden wind, letting go of leaves that yellowed and curled in the long weeks of drought.
I stepped out to the covered back porch, camera in hand, watched as a flurry of leaves sailed through the air, somersaulting, then scudding along the gravel, drifting onto the grass.

A patter of rain pinged, staccato, on the metal roof,  increasing, fading, renewing.
From the dry ground and tired grass a stale dusty smell arose.
It was soon over--a 10 minute rain, leaving grass and plants barely dampened.
Slatey clouds moved, shredding, off to the west. 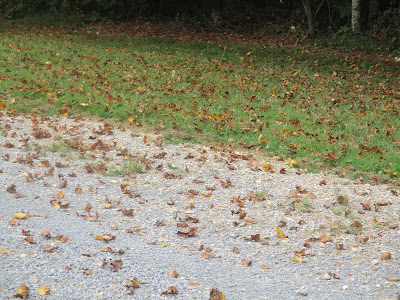 I walked into the lane, noting the crispness of the fallen leaves. 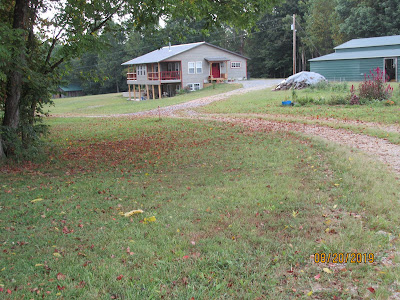 The burst of rain had done nothing to cool the humid air, although the ground along the treeline had a sudden look of early autumn. 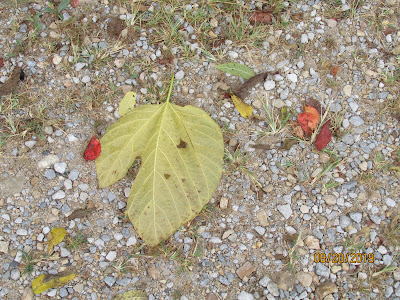 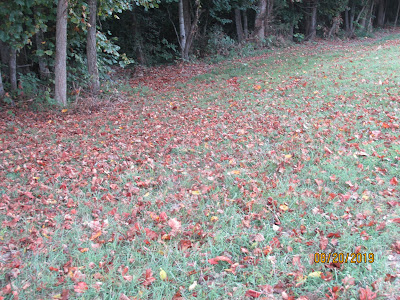 The drift of suddenly fallen leaves put me in mind of school days in Vermont, shoving me back in time.
The shower is over, seemingly yet another rain that has 'gone around.

I trudge back inside, settle myself at the table facing the deep windows, switch on my sewing machine.  Moments later, another burst of rain.  The cats who went out with me to watch the swirling leaves, appear at the window, mouths opening in silent meows. When I let them in, they huddle damply on chairs and sofa.
Early in the evening, grey clouds roll up in the east; thunder rumbles.

Robert-the-cat who is afraid of thunderstorms has slipped outside again.
I stand on the front deck, calling him. I search for him in the barn while rain drums on the roof, look for him under the wicker loveseat on the back porch.

The rain is settling in, not a downpour, but the steady fall of moisture so badly needed.
Pulling on a flannel shirt I crunch down the lane toward the shed.
Thunder booms as I step inside, calling, coaxing.
Robert creeps from behind a bin, belly low to the floor.
He is shaking, pathetic.
Robert doesn't like to be picked up or carried, but when I scoop him up he foregoes his usual squirming protest. Clutching him securely against my flannel wrapped front I trudge back through the storm which is growing  in noise and wet. 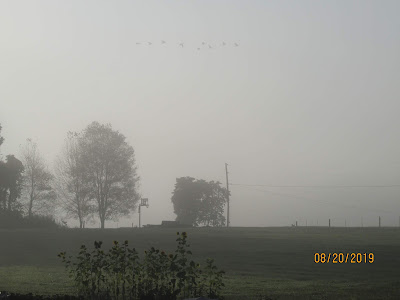 Mornings have been dense with white fog. 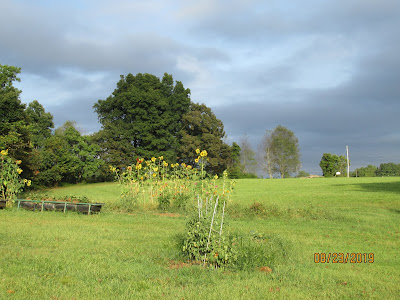 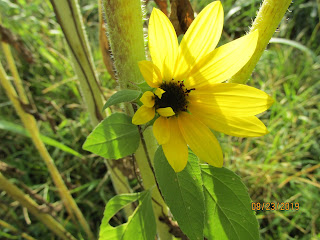 The veg garden has languished in the heat and drought, too far gone to recover.
I have lost transplants too fragile to flourish in this dry season.
Tonight the earth smells fresh, the air is cool.
We will have more warm days, but summer has begun the transition to fall.