Taking Stock, Indoors and Out 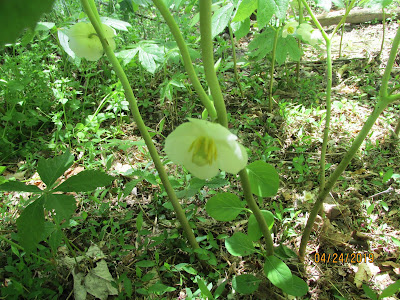 Mayapple grows in clumps along the wooded edge of the ravine.

Springtime, seemingly so tardy in arrival this year, has come into her own.
Neglecting to record each day in photos and words gives me the sense of changes occurring too rapidly.  The frothy petals of the dogwood have fallen, the redbud bloom is likewise now a memory.

The trees across the lane are fully in leaf, filling the ravine with varying shades of green.
When I find a moment to sit on the east porch, it is only the sudden shaking of a leafy branch that reveals the presence of the squirrels who nest in the treetops.
If I watch closely sometimes I can see the flick of a fluffy tail as the squirrel leaps from one slender branch to another or scurries down the tree trunk.
The cats sitting on the porch with me often spy the squirrels before I do. 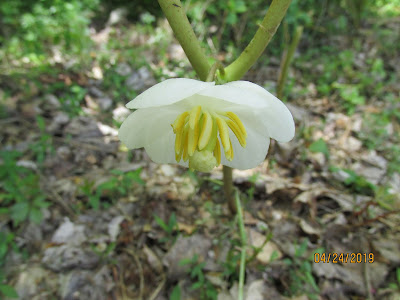 I was disappointed in my photos of the mayapple. The blossoms hide under the 'umbrellas' of the leaves; trying to hold aside leaves and twigs while keeping the camera steady wasn't successful.
I hadn't seen mayapple in bloom during other years.  I suspect the flowers are short-lived. These showed some rain damage, but still a delight to discover. 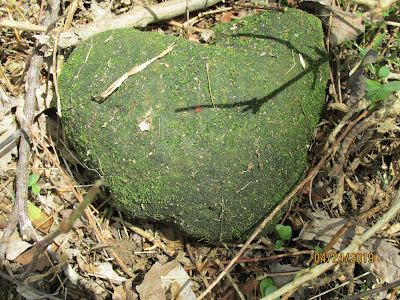 This mossy rock is lodged near the mayapples. 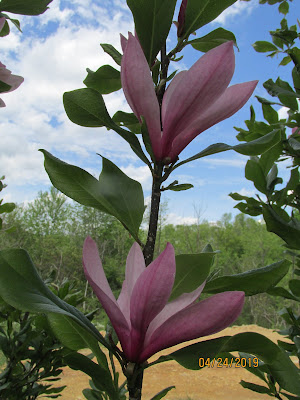 I strolled down to the burned house site to enjoy the last blooms on the magnolia planted by former owners.
The twisted metal and debris from the burned house was trucked away by a man recommended by our SIL. With the trash gone, Jim used the backhoe to fill in the old foundation with dirt removed from our building site.
The mess left by the former owners has meant more work for Jim, but the results are good. 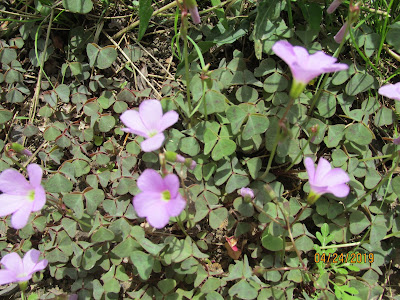 Walking back to our new house along the edge of the woods that border the north property line, I discovered these plants. The shamrock shape of the leaves suggests an oxalis--but I haven't taken time to research. I'm thinking some of the plants might be moved to create a ground cover nearer our house. 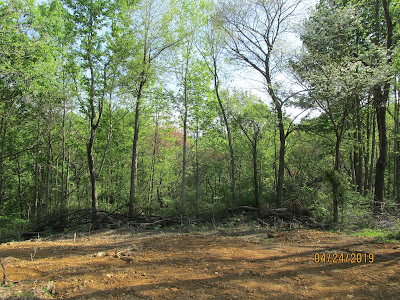 The [somewhat] cleared edge of the wooded ravine to the north.
There is a wide field above the house, but like so much of the landscape here, ridges border the lower part of the property narrowing the open space. 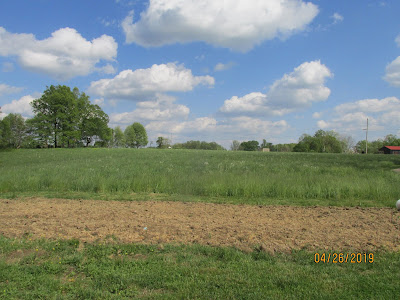 The wind blew on Friday, rippling the long grass in the field, pushing clouds across the sky, creating moving swaths of sunlight and shadow through out the afternoon. 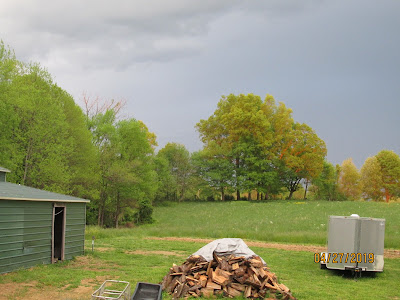 The weather was uneasy on Saturday--the wind had a cold edge.
During the night rain pounded down. 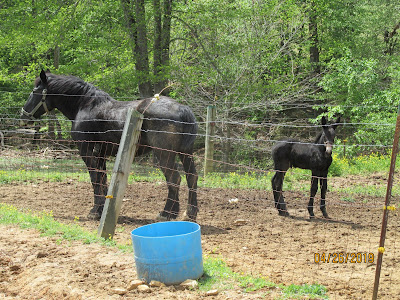 Our neighbor keeps a 'giant jack' whose services are in demand for those who wish to raise mules.
This mare was brought to board and give birth here.
I enjoyed seeing her and her long-eared foal each time we drove past the barn. 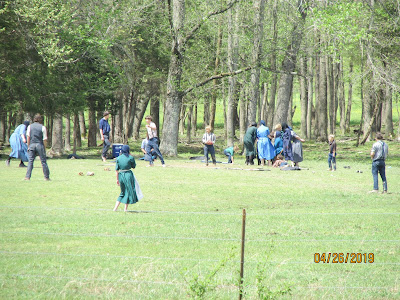 I had an errand at the corner store which borders an Amish property.
The attendance at the little schoolhouse has swelled to over two dozen students with the recent influx of Amish families to the neighborhood.
Friday was the final day of the school term, celebrated with a picnic and a ball game to which parents and siblings of the students were invited.
I was intrigued by the gathering and since my camera was in the car, I attempted one discreet zoom shot. 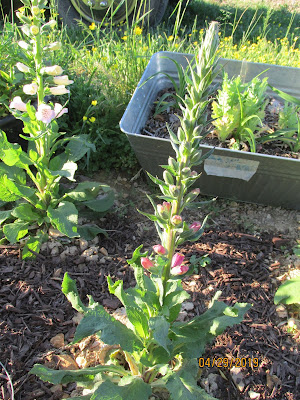 Plants in my makeshift garden are thriving.
I gloat over my five Camelot foxgloves--raised last year from a $3 packet of seed.
Plants of this size, only in the 'lavender' shade, are being sold at Lowes for $15 per pot.
Thus far, two of mine are lavender, two are a deep rose; buds on the 5th plant aren't showing color, but I expect it to be lavender--perhaps the default color.
Today a rummage in the storage trailer finally yielded the packets of saved seeds for which I have been searching.
The seeds from my perennial foxglove [digitalis mertonensis] are labeled 2014, indicating they were gathered from my first Kentucky garden.
The seeds may be too old to be viable, but I have scattered some in a tray of potting mix. 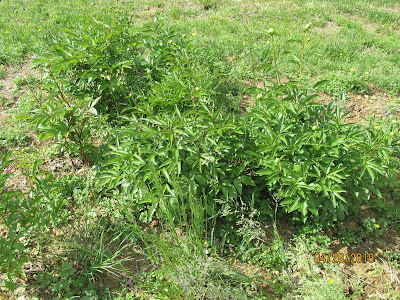 All eight clumps of peonies moved from the farm are in bud.
When I lifted them from the ground there to pot up and move, some bits of the roots broke off--as peony roots will. Not wanting to discard anything that might grow, I tucked the broken bits into the earth--I may have mixed blooms in some clumps as a result. 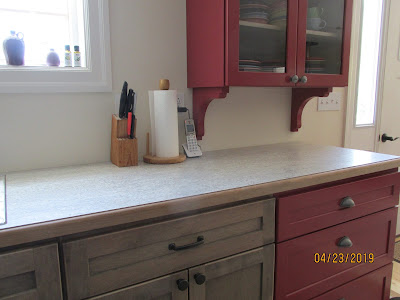 There are changes in the house as well as in the landscape.
Our SIL, Matt, offered to create our kitchen countertops at his workplace.
I chose a high-end laminate [having decided that solid surfacing was too pricey even at cost.]
Matt notified us last Monday afternoon that the tops were finished and we drove into town with truck and trailer to bring them home.
Matt showed us some of the machinery and work stations at the shop where he works. The tools of the trade perhaps were more meaningful to Howard and Jim than to me, but I was impressed . 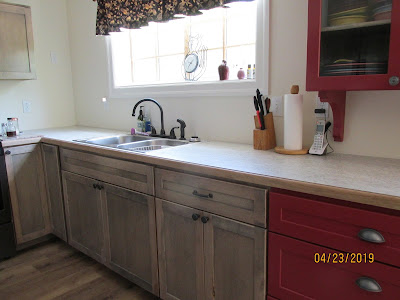 Eventually there will be open shelves fitted in the wall corner between sink and stove.
It is an encouragement to see the kitchen nearing completion. It is also incentive for me to finish sorting the pantry and organizing the lower kitchen cupboards.
I haven't taken photos of the work in progress in the lower level of the house.
Jim laid the flooring in the large guest room today.  He and Howard have been creating door and window trim and baseboards from their lumber stash.
The downstairs bathroom is ready for paint and finishing.

Soon the remainder of our furniture and goods stored these many months in the trailer can be brought inside.
I have the greatroom curtains to hem, and today made a successful bid for some coveted Waverly fabric that appeared on ebay.
I consider it a serendipitous purchase as I acquired some of the same fabric nearly 20 years ago when making curtains for our first home in Wyoming.
With the matching fabric I can now repurpose something previously created and enjoyed.

We are busy, often tired, but there is great satisfaction as we build, decorate and garden, making a home place.