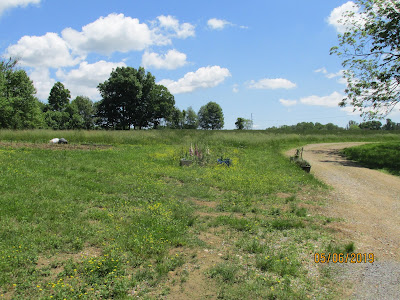 A beautiful day, beginning with dense white fog, then warming to a blue sky embellished with fluffy white clouds.
There were spells of chilly rain over the weekend which means mud in the still to be landscaped areas of disturbed dirt around the house. 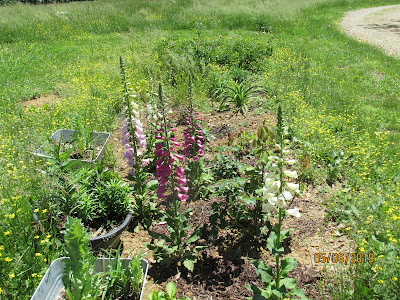 The foxgloves stood stalwart through the storms, although the rain dashed some of the lower blossoms to the ground. 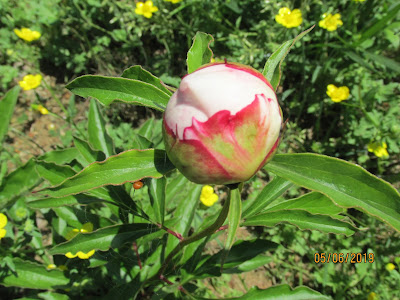 The peonies are in opening mode, and I must get some mulch down to protect the blooms. Remember, it always rains on the peonies! 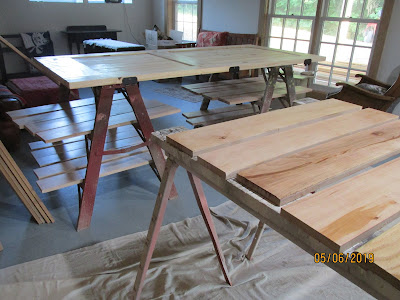 I was drafted to apply poly-sealer to what seemed to be dozens of lengths of lumber that the men have been creating using the planer and sander.  Much of this will be used to finish the stairway.
It is easier to work on flat pieces laid out on trestles and sawhorses--less drip and not [quite] as hard on the shoulders.
I made a quick trip to the South Fork shops on Friday [a huge bag of potting soil from the garden nursery, bulk foods from Sunny Valley, a few items from Discount Foods.]
I was gone long enough for the men to move furniture from the storage trailer into the nearly finished lower level of the house.
I suspect that this might have been accomplished in my absence so that chairs and tables and dressers could be landed without my suggestions as to their where-abouts.
No matter, we haven't come to permanent arrangements or the unpacking of many smaller items.
Since the bookcases have come in, I must figure out a way to bring in the many boxes of books without doing myself an injury. 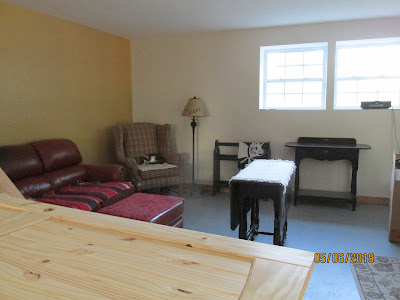 The cats are quite thrilled with the reappearance of favorite chairs, the leather sofa [which they have scratched] and various other convenient perches.
Looking into the big room several times Friday evening I found they were playing a feline version of 'musical chairs,' taking turns to try out the newly furnished space. 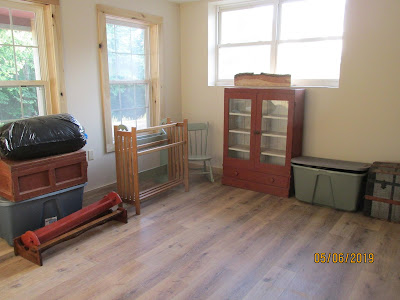 The guest bedroom--without a bed! 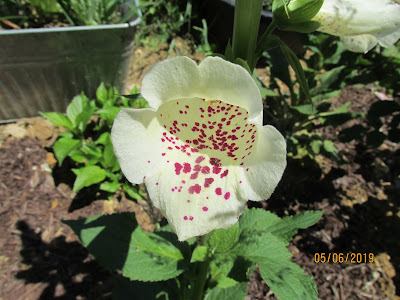 It was nearly 9 in the evening when I remembered that no one had been to the mailbox.
I finished cleaning my paintbrush and stepped out the front door.  The sun had disappeared behind the western ridge, leaving a faint blush of coral pink; the dimming sky was dappled with soft grey, the air cooling. I walked slowly up the drive and along the lane toward the road.
There was the scent of freshly cut grass along the verges, and the meadow scent of white clover, buttercups, green leaves and ripening hay.
Kildeers flew up in front of me, screaming their frantic "Peent, peeeent," swooping down to stagger on stilt-like legs, then lift to fly low over the edges of the pasture.
In the dip of the lane near the pond the air was sharply cooler.
The mailbox held nothing of interest, but the sounds, smells, soft colors of my evening stroll were a peaceful wrap for a day that has left me with both a sense of accomplishment--and aching shoulders.
My comfortable bed beckons!