A Sense of Renewal 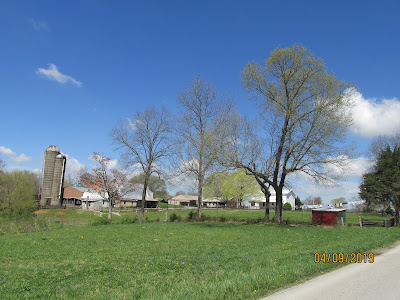 A Mennonite farmstead in the South Fork area.

Spring, arriving slowly and capriciously, found me with a serious lack of energy. There were the lingering physical effects of having hoicked too many heavy boxes while trying to sort through the storage trailer. As well, I felt rather over-whelmed by the need to organize my new house, plan landscaping, make curtains. Rather than accomplishing these tasks I was mostly running in place.

In idle moments I perused nursery/seed catalogs, marking an unreasonable number of plants and seed packets of interest. A realistic look at the mounds of raw dirt to be moved and graded around the house kept me from going online to place orders.
The morning of April 9th unfolded with a blue sky and sunshine. Breakfast and minimal housekeeping finished, I announced to the men that I was heading for my favorite greenhouse/nursery in the South Fork community. 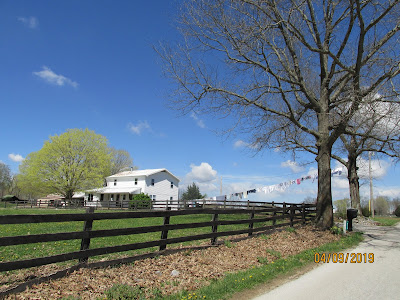 The South Fork area is home to an assortment of Mennonite and Amish groups; the shops and businesses offered by these families are unique.
Life there moves at a slower, 'old-fashioned' pace.
Narrow roads wind up steep ridges, plunge in dizzying bends to run beside small hill farms.
Driving at a cautious speed I enjoy taking my time; around any curve in the road one may encounter a horse and buggy, an iron-wheeled farm tractor, school children on bicycles, dogs, chickens, geese. 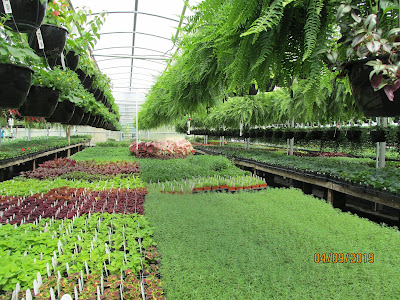 Inside the greenhouse the air was warm and steamy. alive with the mingled scents of growing things.
As I began a slow exploration I felt a change coming over me. Tight muscles began to relax. The megrims of the long winter were banished.

It was too early in the season to buy veg or bedding plants, but after some deliberation I chose three small tuberous begonias, some packets of flower seeds.
I lingered to gently touch and sniff rosemary, lavender, sage, thyme, as I headed outside to the area devoted to shrubs and perennials.
I noted David Austin roses, pots of bee balm, columbine.

Ahead of me on the concrete walk, I saw them--hybrid magnolias.
I have been coveting these, in particular those from the "Little Girl" series.
Online sources listed them in a price range from $40-$70.
Leaning over the group of small trees I noted they were all 'Jane' magnolias--and priced at $18.99 each!  I could barely restrain a whoop of triumph!
I chose two, then galloped to the sales area to ask the young man in charge if he would bring them in for me.
[A concession to the weeks of strained muscles--ordinarily I would have set off lugging them myself!]
With the magnolias safely reserved, I then selected three small 'landscape roses'--with yellow blooms--and a dwarf butterfly bush. 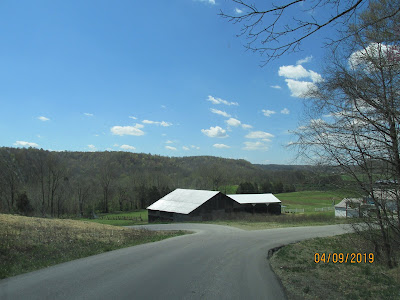 I had considered browsing some of the other shops in the area, but with my purchases stowed in the back of the Honda, I was ready to return home.
Down the winding road, I paused at the intersection long enough to admire another small homestead. 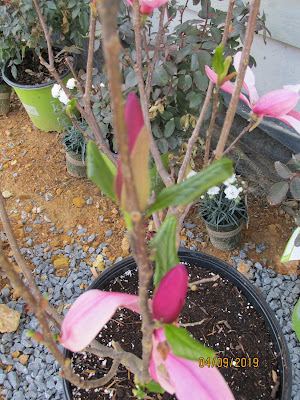 At home I unloaded my treasures, settling the tubs along the east side of the house where the knock-out roses have been living since being presented for my March birthday. 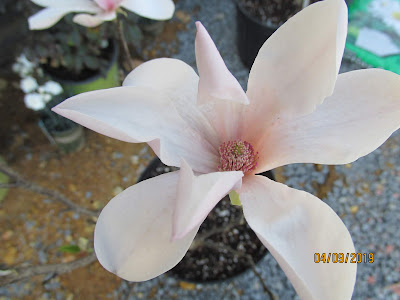 Although both magnolias are labeled 'Jane' one has lighter flowers. 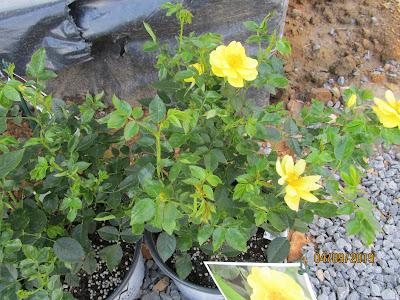 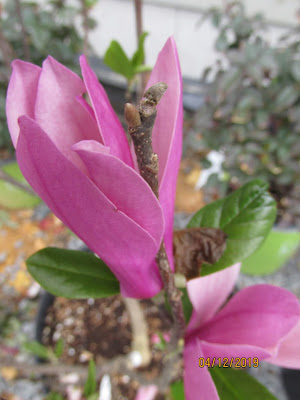 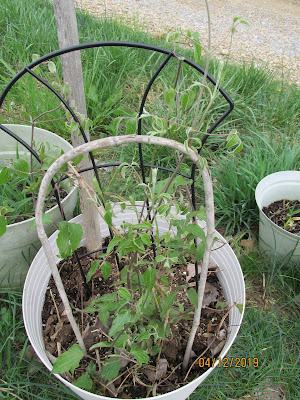 Clematis moved from the farm. 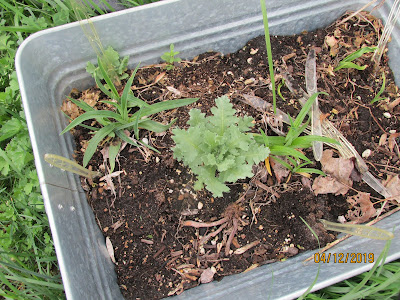 Poppies self-sown in the tubs of lilies which summered last year on the farmhouse porch. 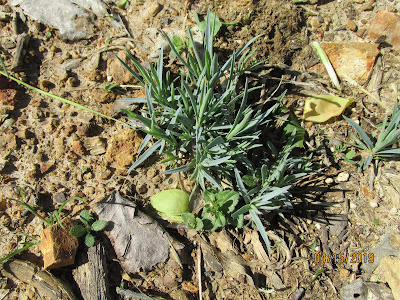 I'm hoping this dianthus is the heirloom 'Old Vermont.' I moved it from the farm.  The online nursery where I purchased it 2 years ago no longer offers this variety. 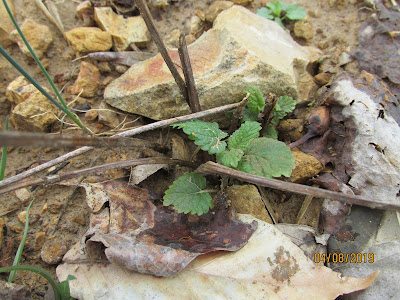 Lemon balm spent the winter tucked alongside a shrub rose. 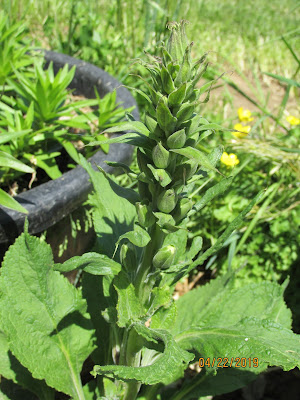 Foxglove 'Camelot.' I have five of these, nurtured from seed last year.
The garden center at Lowes Home Improvement is offering the pale lavender Camelot at $15 per plant! 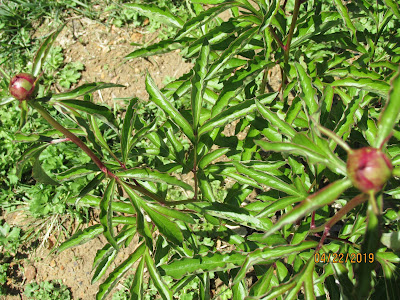 Peonies survived the move and are flourishing. 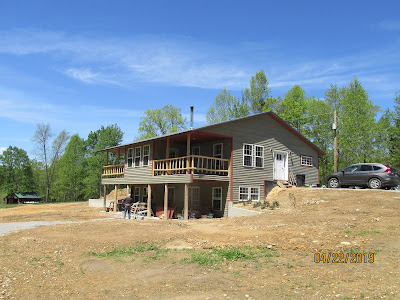 The roses and one of the magnolias after a week in place--looking a bit lost in the expanse of raw dirt.
Jim used the backhoe to dig the deep holes and we got them settled in time to be pounded with a weekend of rain. 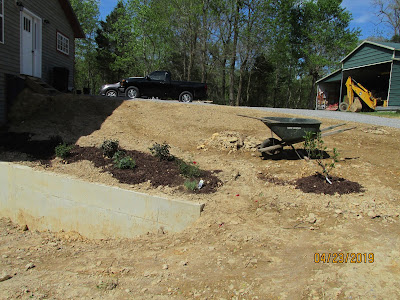 Today the plants have been mulched.
A mere two weeks have brought changes as spring rushes on.
The redbud and dogwood have faded, new leaves are screening our view to the south.
Gardening and house finishing continue.
I am pacing myself, realizing that my goals need to be realistic, tempered to time and energy.