Brain Fog: Fibro fog – also known as fibromyalgia fog and brain fog – is a term commonly used for the cognitive difficulties that can occur with fibromyalgia.

I don't waste much time discussing fibromyalgia.
Many of my friends, even some of my extended family are unaware that this condition has been a fact of my life for nearly 20 years.
I don't take medication for  FM. The physician who initially confirmed the diagnosis prescribed that I take a 5 mg Valium 3 times daily.
I took one and spent the rest of the day staggering about in a stupor.
Not a solution!
I manage with an Advil or Aleve at the end of a particularly stressful day.
I am aware that many other sufferers are more impaired than I am.
Apparently I am able to deal fairly well with chronic pain and fatigue.

Now and then stress, over-work or over-stimulation [even of a 'good' kind] catch up with me creating a stretch of days--sometimes weeks--when I feel that I am slogging through thick mud.
At such times I don't take to my bed, I merely try to slow down.
I've not considered that I suffer from 'brain fog', although that may be a good term for the tired, wooly-brained sensation.
For the past two weeks I have felt that the months of painting, cleaning, rearranging furniture, the happy anticipation of preparing for guests, have tipped the balance.
So--I decided to be kind to myself--to tackle some gentle non-demanding projects.
Right!
I can make a quilt, refinish a large piece of furniture, cut-in paint along the ceiling of a room.
At the best of times I'm not good with fiddly little bits and pieces. 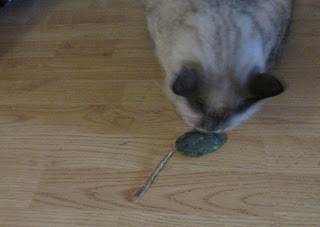 On Monday I decided to make catnip mice, using scraps of fabric and the home-grown catnip which I harvested and dried in the wood stove oven.

Our cats enjoy these soft toys, I have friends whose cats surely need a few to bat about the room.
Locating specific fabrics in the big bins lining the still to be set up sewing space, gathering the correct tools, continues to be a frustrating and time-consuming venture--the prelude to any project.
With my supplies assembled, I realized that it had been awhile since I created mice.
How did I attach the tails? Did I make them of jute garden twine?
I went in search of the ball of twine--knowing I had recently seen it--somewhere.
I poked about in Jim's shop where some of the gardening tools live; I rummaged the shelves in the pantry. After a half hour I ran the twine to earth on the counter in the basement storage room.
Assisted by the cats--delighted with my bits of cloth and the open container of dried catnip, I traced an oval lid to use as the 'body' of the mice, cut the shape from several fabric scraps, stitched, stuffed with batting and a generous portion of dried catnip.  I braided 'tails' from the jute string.
The problem came when I attempted to simultaneously secure the tails and close the
opening in the mouse bodies.
I am nothing if not a perfectionist in my creative endeavors and the clumsy-looking 'mice'
were a disappointment.
I went for a walk down the lane--the mice looked as bad when I returned
[In the middle of the night--too late--I recalled how I had attached the tails of mice in previous years.] 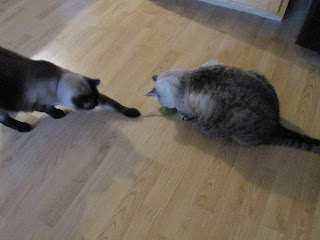 My cats were not concerned with the lumpy mis-shapen appearance of their new toys.
I tossed three 'mice' onto the kitchen floor where they were immediately flung into the air, flipped under the furniture, fought over, slobbered on. 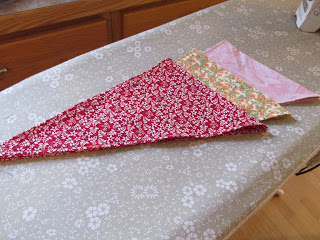 My next project was easier: new kerchiefs for son Howard's beloved Katy-Dog.
He had mentioned that her 'favorite' was looking faded and tattered.
These are still a bit 'fiddly' as I need to tailor my pattern to fit my cloth--thus the double-layered triangle shapes are not cut on the true bias. 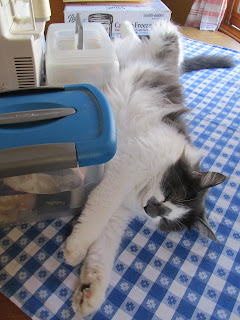 I had the benefit of Nellie's encouragement and help as I stitched the kerchiefs. 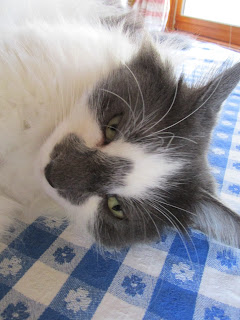 It has been suggested that Nellie remove himself from the area of my sewing--he is not impressed! 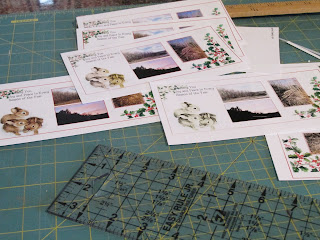 I previously vowed that I wouldn't send Christmas cards this year.
The fact that the 'artistic' cards which I prefer aren't available locally influenced that decision.
On Tuesday morning, with catnip mice and dog kerchiefs out of the way, I searched online for cards which could be created from a website.
I found one, created an account and began blundering through the process of uploading my photos to a template, adding text, printing.
It was a fidgety thing, getting the photos positioned, adjusting the 'frames,' being repeatedly prompted to save my work in progress.  Several times the website 'froze.'
My first cards printed in near sepia tones--quite anemic looking.
Rummage a new color cartridge from the desk drawer--realize too late that the printer was insisting on printing a trial 'alignment' page--on my pricey Kodak photo paper!
I may have said a bad word at that point.
Finally, several decent copies of the Christmas postcards--which needed to be trimmed. 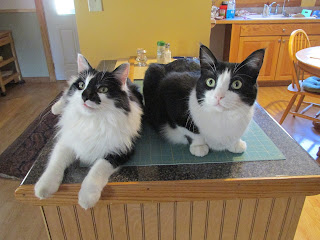 Bobby Mac and Edward have appropriated my cutting mat.

Cards finished. Just time to gather up packages and envelopes, drive to the Post Office which operates on 'fast time' in the next county.
Gifts for son and daughter-in-law packed into a carton, yards of strong wide tape wrapped around, address label printed and attached.
And there, on the counter, were Katy's kerchiefs!
At that point I was a believer in brain fog!
Eyeing the clock I slid the kerchiefs into a brown mailing envelope, gathered my purse [!] loaded my parcels into the car.
It was not until evening that I noticed on the table near my sewing machine a small gift which should have been included in one of the packets.

I didn't sleep well that night, my brain turning over the muddle of the past week, fretting over my lack of competence, my seeming inability to organize and carry out a few simple tasks.
I was content on Wednesday to accept Jim's invitation to ride along with him to 'look at a tractor.'
I packed a day bag with several decorating magazines, the book I'm currently reading.
We stopped for a mid-morning breakfast at a favorite restaurant.
A gentle drizzle began as I waited in the car while Jim talked tractors.
I turned the glossy pages of my magazine--admired houses furnished in classic New England style.
Home in time to serve a late tea to the cats and heat left-over shepherd's pie for our supper.

Brain and body revived after supper to the point that I was able to construct a fairly intricate paper-pieced quilt block, finished at 10 PM. 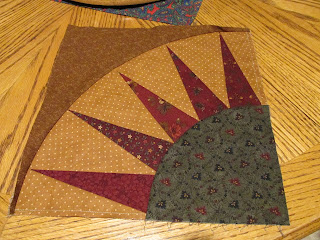 I wish I could report that I slept well, bounced from bed [!] and launched into a productive day.
Instead I slatted about for an hour or more looking for paperwork that was stashed in an unlikely place [neither of us can remember putting it in a drawer in the downstairs guest room!]
Desultory housekeeping tasks done, a simple supper prepared.
I am impatient with being tired and fuzzy headed.
I am also determined this won't become a permanent handicap.
As Jim pointed out yesterday, we are finishing the renovation of the house 'nail by nail'--our remaining belongings will be unpacked, sorted, organized.
We will become accustomed to where things need to be; surely a less demanding routine will gradually replace the long hectic months of packing, moving, renovating.
And, just perhaps, I will decide once and for all that fiddly projects aren't really my cup of tea--
brain fog or not!