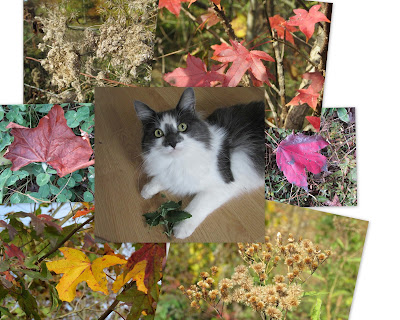 I have been remiss--not saying 'thank you' in a timely way for your messages of concern and sympathy in the loss of Nellie-Cat.
I am not dealing very well with his disappearance.
I make no claims to clairvoyance--indeed wouldn't want that dubious gift--but I admit that without good reason, I felt strongly from the first moment when I called him to 'tea time'--and he didn't appear, that I wouldn't see my dear boy again.
Still, hope dies hard.
I would have him back--battered, dirty, hungry, maybe even missing an ear, an eye, a leg--if he could be returned to me I would take care of him.

How could I guess as he lay stretched beside me in the half light of early morning, my fingers lightly stroking his long fur, feeling him purr beneath my hand--how could I suspect it would be the last time I would touch him or know his presence?

I have hoped that I could write a sequel in which Nellie reappeared, came home again.
I have thus far been thwarted in even knowing with surety what carried him away without a trace.
I have walked the edges of the brook, nearly dry in its rocky bed; I have tramped along the roadside, up and down the lane, ventured up the steep ridge track, gone into the woods beyond the stable--hoping for some sign that would indicate his end, gruesome though it would surely be.
I have quartered the big pasture, eyes straining for a tuft of fur--any trace.

There is to be no happy ending, apparently no discovery that will help to draw a line under Nellie's disappearance.
I am bereft--but I feel enfolded by the kindness of your words left on my page, the letters which have arrived at my inbox.
Those of us who love animals have a bond of compassion, of shared sorrow when there is a loss.
Thank you for once again being with me in a sad time.