Distraught:  very upset : so upset that you are not able to think clearly or behave normally 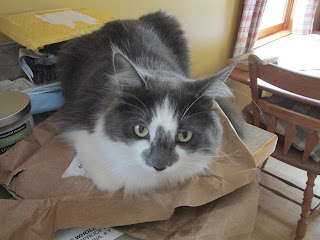 I began the week with  quiet optimism, cheered with the knowledge that major house renovations have been accomplished, rooms painted, curtains and pictures hung.
The work and bustle of hosting the family reunion had passed and it seemed time to settle in, begin to enjoy the house, slowly unpack and sort the belongings which remain in the storage room.

Time to read without falling asleep, time to write, to compose letters, reply to blog posts.
The weather offered several days of October's best--crisp, blue sky days.
On Monday I applied a second coat of dark red paint to the front door, helped Jim clean up after tearing out a wall at the lower house.

On Tuesday afternoon Jim announced that he needed to drive to the next county to purchase sheetrock for the pantry he is building in the lower farmhouse.
Did I have any errands needing done?
Yes, a few items could be quickly picked up at the supermarket.

It was an hour early for the cats' ritual 'tea time,' but I decided to dish it out before we left.
Two of the 'boy cats', Bobby and Nellie, were outside, and Bobby responded as usual to my call.
Nellie did not, unusual, as Nellie delights in food at any time.

I was mildly disturbed that he didn't appear, but trusted that he would be waiting on the front porch or on the wall when we returned.
At home an hour later, I was alarmed when there was no response to my calls of 'Nellie! Nellie!'

Jim and I took turns wandering up and down the lane, into the edge of the woods, calling until darkness fell, then going out through the evening, flashlight in hand.
We opened closet doors, went through the workshop; I even went down to the lower house, thinking that he might have followed Jim there, popped inside when the entry door was open as Jim worked.

By 7 on Wednesday morning I was out in the chilly mist, striding along the road in both directions from the bottom of the lane, dreading that I might find a still form in the ditch.
I went on calling, but with the heavy foreboding that there would be no response, no lively cat bounding out to meet me.
Nellie was gone. 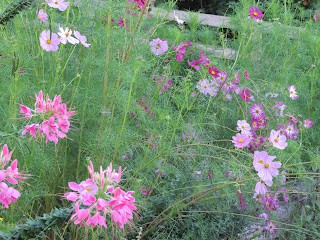 Distraught, wondering, hurting within, I have been unable to stay indoors or to settle to any of the anticipated pleasurable tasks.
I launched myself at outdoor projects, turning over a strip in the garden for the perennial seedlings which have been out-growing their pots on the porch.
I attempted to tidy the strip which has been over-grown with cosmos and cleome.
Honeybees were working there and as I yanked up a leaning stalk of cleome I was stung just above the wrist--a sudden sharp stab of pain--quite out of proportion to the size of the stinging insect.
I gasped and batted away the throng of golden bees who swarmed to the aide of their irritable workmate.
I retreated to the front of the house to trim the towering Rose of Sharon [hibiscus syriacus] and lop thorny branches from the rugosa planted too near the steps by one of the former owners.

Jim appeared and sensing my despairing mood, ran the tiller over my strip of turned earth, brought a shovel  and dis-interred the rugosa.
As the sun slipped over the western ridge I refused to stop working, digging a hole on the side hill to relocate the rugosa, dragging off branches, carrying tender plants inside to the basement rooms.

I have continued through the remainder of the week setting myself to accomplish physically demanding tasks, spending long hours outside, walking, working,
trying to accept that my pet is gone.
I try to force myself to stop looking for Nellie, to stop imagining that I see him trundling up the lane, or sprawled atop the wall in the sunshine.
My mind hums his name, and as I unhappily puzzle over what snatched him from us, my ears ring with the ancient phrase:
"the pestilence that stalks in darkness,
the destruction that wastes at noonday."

Nellie disappeared 'in broad daylight' taken by 'something' which prowled or flew near the house.
Almost daily we have heard the red-tailed hawks keening as they circle above the meadow.  We have heard the owls hooting at night--and blame them for the disappearance of Jim's old cat, Raisin, in September.
What other predator is stalking our cats?  Coyotes?  Bobcats?
We cannot keep all the cats confined to the house.  Several have always been 'barn cats' accustomed to life outdoors.
Nellie's brother, Bobby, is most resentful of being kept inside these past days, wily about charging through a briefly opened door.
Charlie goes in and out--and when he is determined to be 'out' his pacing and constant importunate mewing insures that out he goes.

Today, four days on, the site of the honeybee's sting on my wrist is still irritated and mildly painful. The tiny wound is visible, the flesh around it slightly discolored with yellow bruising.
I suspect it will subside and heal long before the interior pain of losing my Nellie-cat.
I cannot yet write a tribute to him.
I can't give in now to the tightly coiled knot of pain and unshed tears.

There are those who reading this might find it the maudlin ranting of an old woman, grieving a lost cat instead of expressing concern for the many tragedies all around us.
Losing a pet is a different sorrow than the parting with a human love--spouse, parent, sibling, child.
It is removed from the wider sadness that we feel when reviewing disasters of accident, war,
flood or famine.
Those who take animals into their homes and into their hearts, to care for, to cherish as companions, need no explanation for the medley of sadness, frustration, anxiety and stunned disbelief which
have burdened me since Nellie disappeared in the sunshine of a golden autumn day.

Posted by Morning's Minion at 6:01 PM