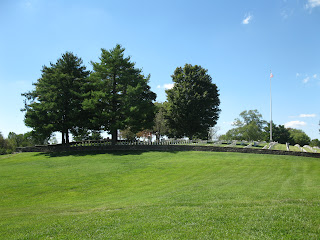 We have had a run of nearly perfect early autumn days.  The day of the equinox saw the sun coming up to warm a nippy morning and burn away the heavy dew.
It was a beautiful day for an outing.
We have several times passed the signs for the Mill Springs Museum on the site of one of the few battles fought in Kentucky during the War Between the States.
J. decided, rather spur of the moment, that we would make the drive--about 45 minutes.
I took this photo of a cemetery just up the hill from the museum parking lot.
Yankee soldiers who fell in the battle [19 January, 1862] are buried there as well as some local families of that era. 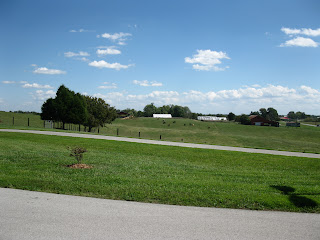 Quiet farmland spreads out in every direction, much as it must have looked 150 years ago.
We watched a short film about the battle history, then browsed through the museum displays.
There was the expected collection of rifles and swords, along with the oddments turned up years after the battle--bits of camping gear, axe heads, spent bullets.
A tiny cabin had been built of saplings to show the sort of crude shelter which might be put up in a temporary encampment.
One room of the museum is designated as a library.
I could have spent hours there.  The highest shelves hold large faded volumes which could only be viewed with permission from a staff person.
Other shelves hold more familiar works, such as Carl Sandburg's series on Abraham Lincoln.
Bruce Catton and Shelby Foote, both well known researchers/authors were well represented.
Other sections display copies of military records, both north and south, maps, back issues of a Confederate Journal.
Perhaps the most interesting to me would have been the various diaries and memoirs of those soldiers or civilians who lived through the war years. 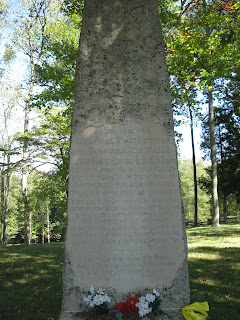 The commander of the Rebel forces at the Mill Springs battle was Brig. General Felix K. Zollicoffer.
Zollicoffer fell under fire early in the battle, near a huge oak tree.
The oak became a sort of shrine in later years, with one local family in particular dedicated to keeping a wreath ceremoniously placed there on 'Decoration Day.'
When the oak tree died after a lightning strike and had to be removed, a stone monument was created at the site. 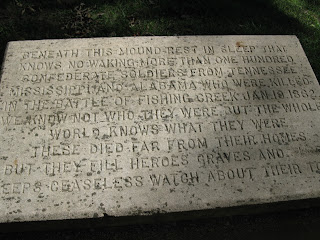 Beyond the monument words chisled on a simple stone tablet inform visitors that we are walking over an area that became a mass grave for the Confederate dead. It is shaded and quiet there beneath tall oaks. Near by, in a open grassy area, are ranks of simple headstones of unpolished marble.  Most bear the name and rank of a soldier who died on the battlefield.  Others have been left blank.
It was many decades later before dedicated research into military records produced the names of some of the men resting in the mass grave. 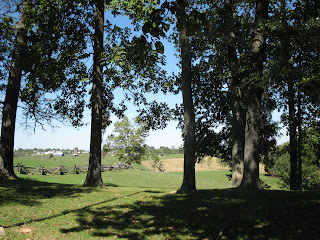 Split rail fences have been built to enclose the graveyard and outline a trail through the woods and along the ravine where some of the fiercest fighting took place. 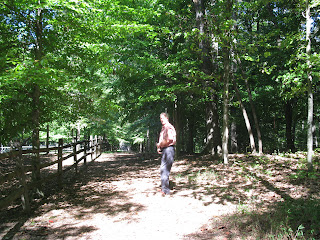 We walked beneath tall trees--oak, hickory, black walnut and a few spruce--moving from deep shade to patches of bright sunlight.
I found it difficult to imagine the chaos and clamour of battle that took place here on a dark, foggy and﻿ cold January morning. 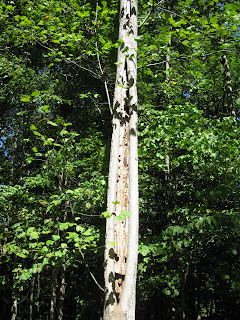 Woodpeckers and flickers have made good use of this standing dead tree near the site of a long-vanished blacksmith's shop where some of the wounded men were carried after the battle.