"The Plumber Is The Man Who Saves Us All" 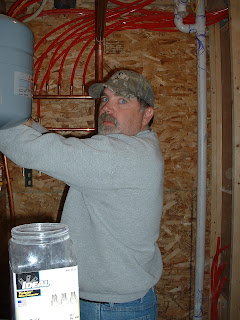 Our son-in-law, M.G. fine-tuning the installation of an in-floor heating system.
I was listening to Garrison Keillor Sunday as I worked at putting away fabric in the family room.
After a half hour of abominable jokes, Garrison sang one of his original little ditties:
"The Plumber is the Man Who Saves Us All"--appropos of freezing weather in the mythical community of Lake Woebeggon.
Thus was appropriated the title for M.'s birthday tribute. 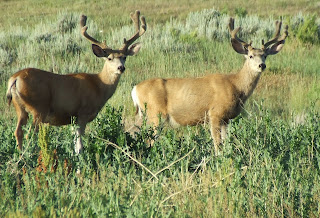 M. has a great appreciation for wildlife and often has a camera with him in the work van. 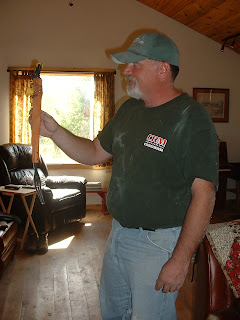 His sense of humor extends to such things as bringing me a huge tomato worm looped around the handle of a barbeque fork.
[And though he has a way with a steak and a grill, the worm was quite alive!] 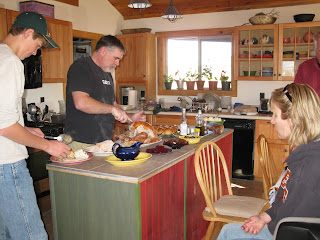 As mentioned, M. is a good cook;  better than good.
During our Wyoming years the Thanksgiving turkey may have come out of my oven, but you can be sure that before it went in M. had supervised the seasoning and preparation, was there to pronounce it "done" and do the carving. 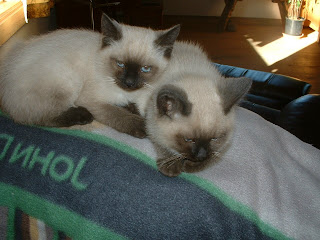 M. was quite responsible for the kittens Chester and Jemima coming to live with us.
He saw Pet Connection's poster in the local grocery store and immediately called to suggest that I rescue the kittens from the shelter.
I managed not to go there for about a week--then another call and the stern reminder that those kittens needed a good home.
Obviously I gave in and drove to Pet Connection, carrier in the back seat of my car.
I guess I can't hold M. liable for the fact that a month later the kittens' parents, Charlie and Maizie also became part of our feline family.
Happy Birthday Matt!
Posted by Morning's Minion at 8:30 AM