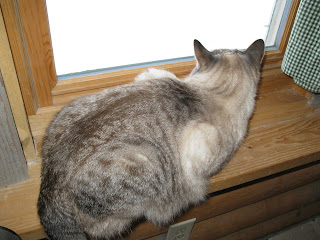 Teasel is bird-watching.
Sunday was a day of heavy wet snow which has mostly melted today leaving us with formidable mud--but at least we've had a sunny sky which should help to dry it up. We can't drive the trucks down close to the cabin, so we do errands and ferry things back and forth, taking our shoes off at the door.  Daughter, grandson and son-in-law all lent aid in sorting and packing in the storage shed and barn yesterday. We had a bonfire of things which should likely have been discarded long ago. I confess to getting testy when some of my "treasures" are viewed with dubious intentions--and the remark, "You don't really think we're moving THAT?"


The cat sniffles seem to be improving. So far it has affected only the cat family of Charlie and Maisie and their "children" Chester and Jemima. Chester is a nervous sort who tends to wiffle and wheeze a bit whenever he is stressed.  I suspect that the different, less even heat in the cabin may have brought this on.  It seems to run its course in 3 or 4 days, and the sufferers have had no loss of appetite. I held down several of the cats this morning and clipped their nails.  Some of them have a "so what" attitude, several others who are usually trusting and gentle go quite beserk the minute I gently pick up a paw and click the clippers. J. and I ended up laughing uproariously at them--and of course cats can't bear to be ridiculed, so we had to apologize!
Signs of very early spring are evident.  Thawing [muddy] horse pastures and cattle yards are adding a very pungent tang to the air and there is the nearly indescribable smell of earth that is slowly releasing months of frost. Pebbles is frisky as a colt, and thinks that with an increase of vehicles and people going in and out of the drive, we all must be meant to feed her. I think she has gotten  some extra meals, since the buyers moved in. She can do "poor starving horse" very convincingly.
The cats were much entertained this morning by a group of starlings [such unattractive birds!] who were landing in the trees which surround the back of the cabin.  They are obviously considering nesting in the eaves and J. is hoping that work he did last fall will make their former roosts on the high window ledge and under the edges of the roof much less available.
We've had some unexpected business/legal details to sort which is taking up time we hoped to spend finishing the packing in a more orderly manner.  Can't be helped. I expect we will roar out on schedule, whether with our wits about us or not.
The kind man from whom we are buying the little Kentucky farm phoned J. today to say that he will turn up the heat in the cottage, put on the water and the water heater, so we will arrive to a warm house and the prospect of a hot bath.
At twilight I wallowed through grainy snow and congealing mud to the strip of earth which never quite qualified as a flower border. The rose canes are still dormant and my heirloom peonies are beneath the snow.
Somehow it would't seem right to dig about trying to retreive the peonies now that the property has changed hands.  The white peony is one which J.'s Mom had planted at the old farmhouse in Vermont, the red ones came from my grandparents farm, others were moved from an old dooryard in Port Henry, New York where I helped my boss clean up a house for which his wife was executrix. I know of several mail order nurseries which offer the older varieties.
My good friends at the quilt shop have given me a gift of money specifically for the Kentucky garden, a dear friend in Maine has sent an on-line gift certificate for Jackson and Perkins---that catalog of garden wonders.
"Sprouts" Greenhouse is just beyond he landfill outside of town here. Since a dump run is planned for tomorrow, I can browse the seed racks there with my church gift certificate.
When recent nights have been too full of aching muscles and whirling "To Do" lists, I continue to mentally review the remembered delights of bulbs and flowering plants with the anticipation of enjoying old favorites again.
I'm bracing for some exhausting days leading up to the grand departure, probably three days on the road, if all goes well.  Since Pebbles the Horse must be rested and walked frequently during the journey, I should be able to take advantage of that respite as well.  My thought is to find my shabby armchair as soon as I can delve into the moving van when we reach Kentucky, plunk it in a friendly spot in the cottage, make tea---and snarl at anyone whom comes near with a request to DO anything!
Posted by Morning's Minion at 11:38 PM