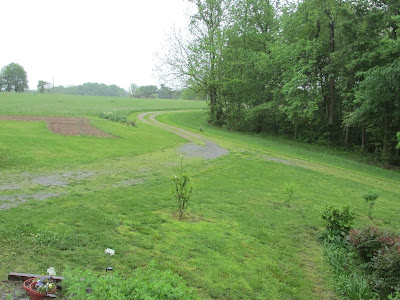 We were up early on Tuesday morning. Thunder had been rumbling since around 4 a.m. rain fell in windy gusts. The cats fidgeted, shafts of lightning bored through the bedroom curtains. Sleep was impossible.
Inside the rooms felt dim even with lights on; outside the sky was dark, the landscape had a brooding aura--dripping trees along the lane and at the edges of the ravines seemed to have moved closer to the house. The last blossoms of the dogwoods lay plastered on wet grass. 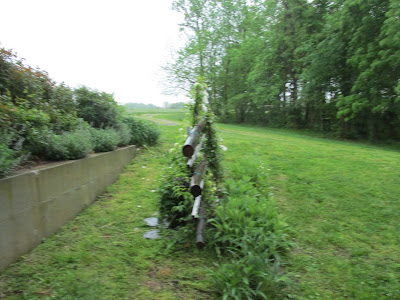 Between bursts of rain I ventured outside. It was a wellies kind of day. The cats followed me out, stepping daintily through the sodden grass, returning to the porch to shake wet paws with distaste. 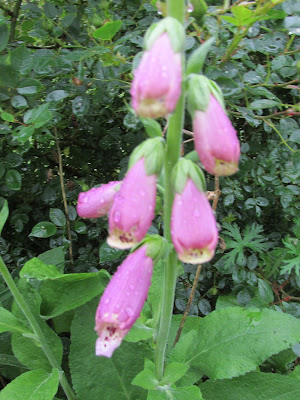 The first foxgloves to blossom. 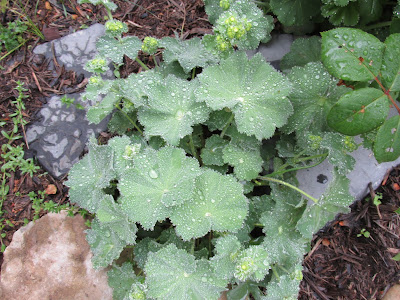 Lady's Mantle [alchemilla] the only two plants from last season's sowing.
Weeds abound in all my plantings, a frustration, as I'm restricted from hands and knees gardening.
Gardens weeded and mulched in late October produced flourishing mats of ground cover undesirables, dandelions have seeded themselves, buttercup invades in tough-rooted mats. 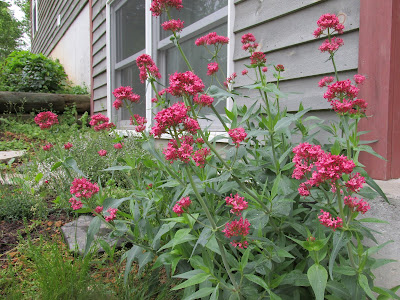 Centranthus ruber, a sturdy clump from seed two years ago, with a colony of new starts surrounding it. 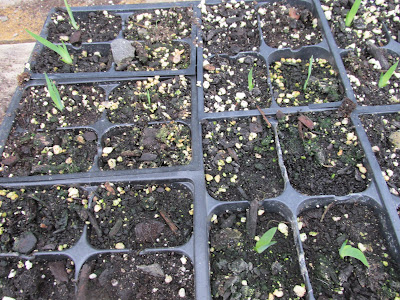 Blackberry lilies, seed saved from lilies planted in 2020, seed purchased from Select Seeds.
I am fascinated by these. I had seed grown plants to set out by mid-summer. The lilies are small, attractive, but not commanding in the way of daylilies. The ripe seed pods resemble a large blackberry. To date, 17 of my collected seeds have germinated; I am hopeful there will be garden space for them when they are ready to move to permanent quarters. 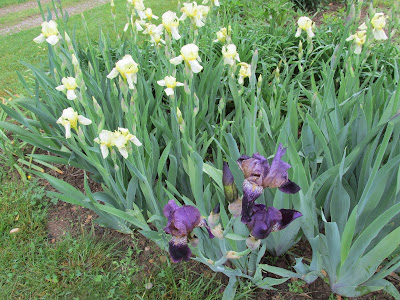 The pale yellow iris were removed from an over-grown planting along a stone wall that needed to be demolished at Howard and Dawn's homestead.  I found the purple iris growing near a power pole at the western end of our property near the site of the burned house.  I had a stunning collection of iris at the Amish farm, but wasn't able to move them. These yellow ones are rather insignificant on their own, but interspersed with darker varieties would provide contrast. I have a bucketful of them sitting in the greenhouse waiting to be interred in some likely spot.
Strawberry crops are ripening locally in spite of several wet mostly dark days. The hay in the east meadow wants cutting. In the garden Jim's planting of beets has emerged, the tomato plants have settled in and should have their first blast of blight deterrent--as soon as there is dry weather.
I have worked in the greenhouse in cautious increments of time, transplanting the tiny seedlings meant to be the nucleus of a wildflower garden. Another project on hold until I can convince J. that a raised bed alongside the front door brick landing would be a positive enhancement.
Oh! the things I would do--if I could do!
Posted by Morning's Minion at 9:51 PM