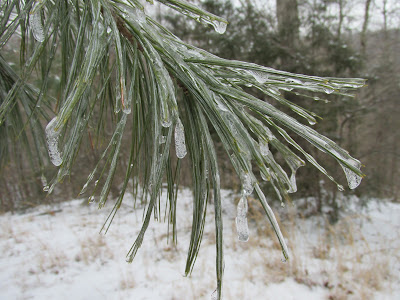 Freezing rain, sleet, snow--in a variety of textures, piled one on the other in cold and frozen layers.
On Wednesday, the 2nd pair of boots I tried gave me enough traction to walk carefully around the edges of the lower field. The pine tree near the western boundary was a study in ice. 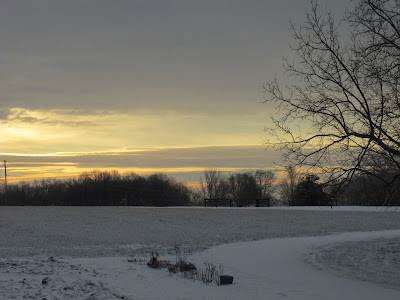 A pale sunrise heralded a few reluctant beams of light, quickly snuffed out by clouds that began to dump more snow. 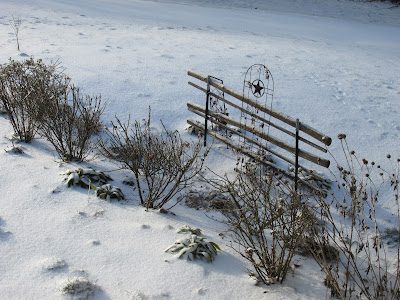 Looking onto the east wall garden during a spill of pallid sunlight. 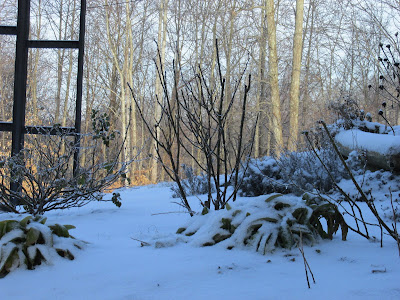 Plants huddled under snow along the west retaining wall. 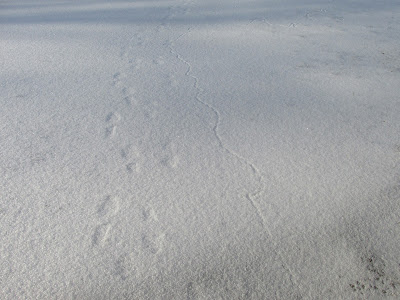 Animal tracks viewed from the lower porch.
I wonder if a visiting possum dragged its bony tail creating that wavering line.
Trudging through the snow at the edges of the ravines I noted hoofprints of deer, the rounded pawprints of Robert-the-Cat--some other tracks rather worrying--a small mammal--but what?
We've not seen the usual wildlife this winter;  the foxes have been absent for more than a year.
This morning's sighting of a lone doe picking her way through the snow above the veg garden is the first seen in several months. 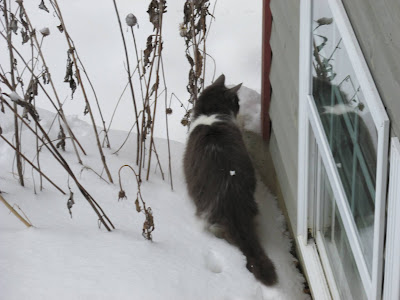 Small birds have darted among the seed heads of coneflower, perched on frozen stems, swooped down to land on the back porch. Nellie peers at them with likely evil intentions.
Before the snow came there were robins bouncing and pecking below the west windows.  I fear for them in this prolonged spell of below freezing temperatures. 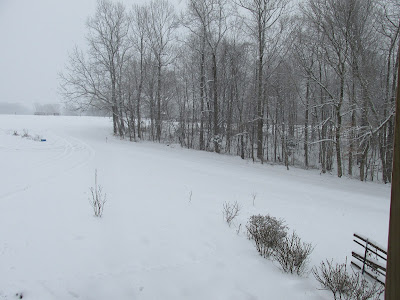 Snow fell though the day [Thursday] tapering off at dusk.
I didn't wallow up the lane to the mailbox, suspecting that the mail carrier likely couldn't make his rounds. 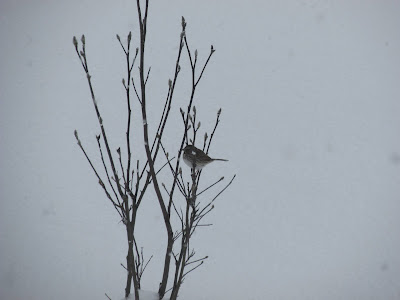 The sparrows seem to lack fear of the cats, landing on the front porch to snatch kibble from the dish designated for Willis and Sally, the outdoor cats.
A tufted titmouse joined the sparrows and juncos; the woodpeckers seem to have deserted us. Cardinals flit from the low branches of trees edging the ravines; bluejays are scarce this winter.
The usual household chores took up part of the day before I went downstairs for another session of machine quilting.
Teasel-cat likes the large downstairs living room and keeps me company there. She and Shelby take turns sitting in front of the floor-length windows to observe the birds flying from the fence to parade across the porch floor.
At 4 P.M. the temperature had risen to 33 F--nearly a heat wave!
Posted by Morning's Minion at 9:42 PM