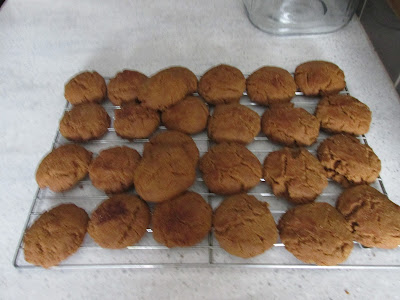 From time to time Jim remarks that the chewy molasses spice cookies I've been making for years are not 'gingersnaps.'
My mother made cookies, rather soft cake-like ones called 'jumbles,' a chocolate drop cookie, and a soft white 'sour cream' cookie.
A few times a box of gingersnaps made their way into the house.  I didn't like them.  I recall thin hard rounds with a peppery flavor--not a treat.
I made the mistake on this cold housebound day of wondering aloud if I should bake cookies.
Jim piped up, 'Gingersnaps?'
Having had this discussion numerous times I replied, 'You know that I make molasses cookies. I don't make gingersnaps.'
Jim's lip jutted out, 'I like gingersnaps!'
'No,' I stated with asperity. 'Several years ago you bought a package of gingersnaps--at a ridiculous price--you ate several and the rest went stale because they weren't what you wanted.'
In a huge effort to be agreeable [may it be counted unto me as righteousness!] I googled gingersnap recipes.  After looking at several, nearly all the same, I chose one from King Arthur Flour.  They are experts in the line of bakery, right?
Comparing King A's recipe for 'gingersnaps' with my tried and true 'ginger doodles' there were two slight differences.
King A. specified that 'shortening' should be used, not butter, in order to turn out 'crisp' cookies.
So, 3/4 c. of butter-flavored Crisco to the 1/2 cup of butter in my recipe; an extra 1/3 c. flour for King A.
I had my doubts as I tried to blend in that last 1/3 c. of flour, the dough becoming crumbly.  It didn't plop out of my cookie scoop in nice soft mounds--I had to roll and flatten each scoopful by hand.
Jim has disappeared after supper with a handful of the fresh cookies and a glass of milk. To my tentative query of whether they were crisp he replied, rather disparagingly, 'somewhat.'
When pressed he allowed that the so-called gingersnaps are 'good enough.'
I tried one--not at all impressed.  I rate them as dry and crumbly.
When thoroughly cooled I predict they could serve as hockey pucks--or to lob at marauding wildlife.
So much for King Arthur and the bakery experts.
If the weather continues formidable I might make another batch of cookies: Lemon Squares?  Chocolate Chip? Oatmeal Raisin? Even Peanut Butter?
Anything but Ginger Snaps!

Posted by Morning's Minion at 6:07 PM