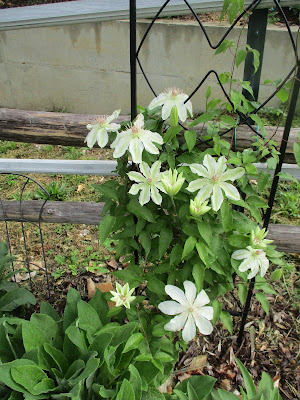 Clematis Candida--before the frost.
The wind that swept in from the north last week stayed with us.  It was the kind of wind that rushed across the meadow grass creating  constant waves of silvery shimmer.
Although the sun shone and the sky was a bright blue background for puffy cloud pillows, there was a keen bite to the wind. By Saturday afternoon the sky was pewter tinged, tree branches tossing.
Sunday evening brought hazardous weather warnings. Jim as always, tracked incoming storms on the doplar weather site.
We communicated with our son and his dear wife in Tennessee. They, in turn, were anxious for the cousins on the other side of the 'gap' in the greater Chattanooga area.
We went to bed slightly before midnight, alert to the possibility of high winds.
I left my bedroom window slightly raised for fresh air and woke before six on Monday to the moaning of wind, rain pummeling the glass. I lay still, listening, reluctant to stir, but then rose to push the window down and trace the path of blown-in rain on the sill.

The households of our family in Tennessee were untouched, but whole sub-divisions near them had been flattened over night by tornadoes.
It was a restless day here--sudden wild bursts of wind-driven rain; the cats dashed out, came back in, disgruntled, damp, obviously feeling that we should do something to provide them with more pleasant circumstances.

Wind has always unsettled me.
A gentle breeze is welcome; a howling, shrieking wind is too elemental, too much a harbinger of unrest or danger.
My bedroom in my girlhood home was in the south-east corner of the little house my parents built. When my Dad bought his first TV it was stationed in the corresponding corner of the dining room below.  Daddy installed a massive TV antenna on a metal bracket a few feet from my bedroom window. At the best of times the thing 'sang' with the slightest movement of air through its metal tubing.  When the wind rose, as it so often did during the night, the antenna seemed alive with howls, groans, shrieks at the head of my bed. Eventually moving the bed to the other side of the room did little to diminish the mournful wailing.
It was likely those disturbed night hours which established my skittishness regarding wind. 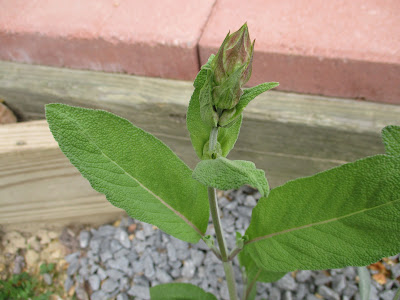 April most anywhere is a month of capricious weather. Plants rush into bloom, green leaves unfold, the sun shines and it seems spring is established.
Then come the cold nights, frost, freezing rain or snow.
For 10 days here we had no need of the wood fire.
Jim swept off the porch where he stacks a night's worth of wood; I dusted away the fine ash that settles on furniture or shelves. We opened windows to warmth and spring-fresh air.
In the greenhouse, seedlings emerged, flourished.
The electric heat was set to come on if the house grew chilly in the wee hours of the morning.
By Friday afternoon I again wanted the comfort of the wood stove. 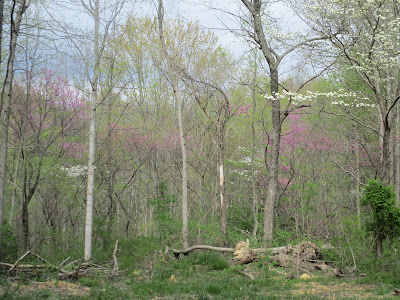 Ephemeral drifts of redbud and dogwood on the slopes of the north ravine. 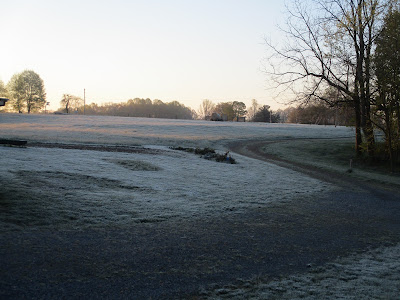 With frost warnings posted for Tuesday night, I thought I had done what I could  to protect vulnerable plants.
In the greenhouse I spread plastic sheeting over tomato plants, placed a strip of fleece over newly emerged herb and flower seedlings. I draped another piece of plastic over my pot of nasturtiums.
Outside, my cherished clematis vine was covered with an old shower curtain clipped with clothespins to the edges of the trellis.
It was 27 F. this morning at 7 a.m.--as cold as many mornings during the winter.
Frost lay thick on the grassy areas around the house. 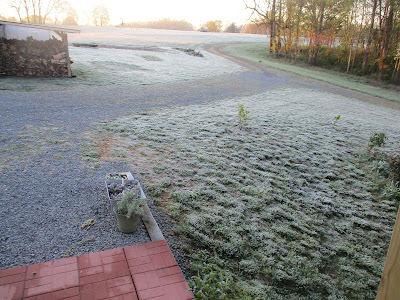 As the sun came around the corner of the barn it struck sparkles from the frost. 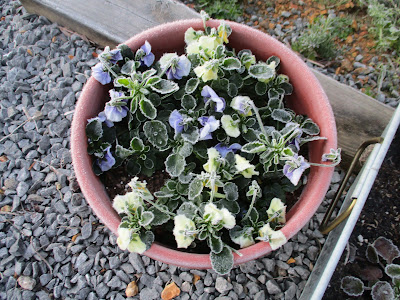 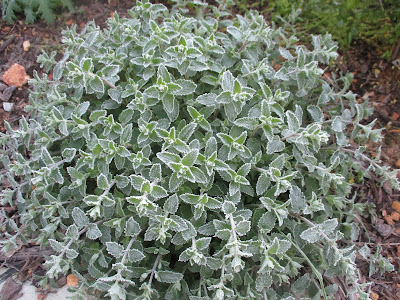 A mound of nepeta silvered with ice. 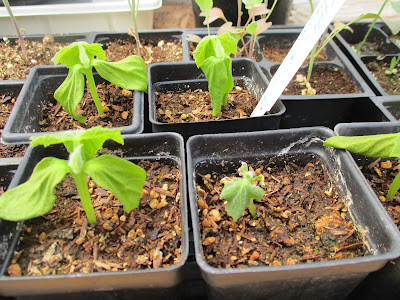 In the greenhouse all was not well.  Cucumber seedlings, nearly ready for the garden,  had shriveled in their pots. 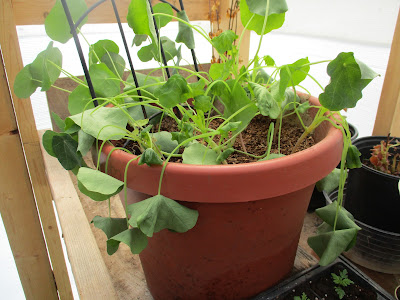 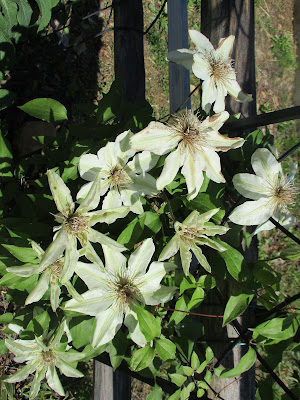 The damage which most troubles me is the blighting of the clematis Candida, blossoms marred, edges tattered.
Trees along the lane which a few days ago were dressed in the tender green of emerging leaves, now have a faint brown cast, some of the fresh leaves frost-darkened.
New growth on the rose bushes will need to be trimmed.
Foxglove and lilies seem to have endured the cold.

Gardeners are always at the mercy of the weather!

Tonight is meant to be the last night of frost.  I have again swaddled plants in the greenhouse, wrapped the damaged clematis vines in old tablecloths and a flannel sheet.
Some of the plants will likely recover from the punishment of cold.
Others may not.

It seems silly to fuss over frost-damaged plants when so much of greater seriousness is amiss in the world.
Checking over the greenhouse seedlings I thought of Shakespeare's wry remark, "Rough winds do shake the darling buds of May."
Morning will bring fresh concerns, hopefully reasons for thankfulness, a choice of tasks to be done.
The season will roll on regardless and we will stride--or stumble--along!