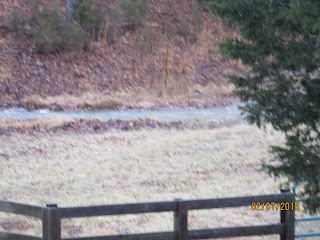 It rained all night. It was nearly midnight when I went upstairs to bed, but I didn't quickly fall asleep.
My mind plodded over a number of things, none of them dire, just matters that refused to be shelved.
Rain beat on the roof, a steady drumming punctuated by wilder bursts., adding to my wakefulness.

When the cats and I creaked into the kitchen at 6:15 I realized that Jim had been down earlier, replenished the fire, then returned to the warmth of quilts.
There was little in the morning landscape to recommend the day.
The sometime brook boiled out from the woods and surged along its gravel bed beyond the fence bordering the lane. 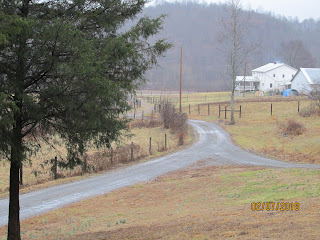 Mist dulled the edges of buildings, fence posts, and fields. 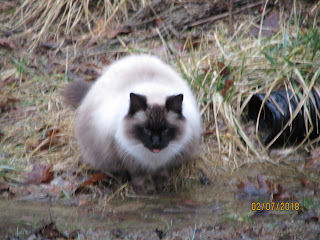 Charlie-cat bustled in to eat, demanded testily to go OUT again.
He crouched in the wet along the driveway adjacent to the front porch, preferring to drink from an icy puddle. 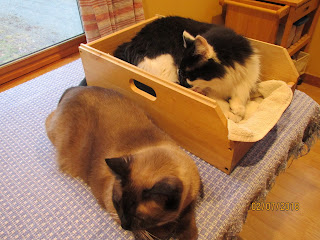 Poached eggs on whole wheat toast for breakfast, the area around the woodstove swept and tidied, dishes washed.
We had two quick neighborhood errands to do--such short distances that the car didn't get really warm.
It felt good to return to the cozy kitchen.
Bobby Mac had been out and about, and hurtled back indoors, his feet muddy, his fur glistening with mist.
Matt and Gina gave us several wooden bins, three of which are in the pantry holding potatoes, onions and such.  The 4th bin remained on the table in the alcove.  Bobby likes to spend time on the table as it gives him a wide view of the back dooryard. 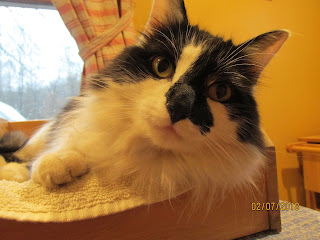 Bobby was considering the bin, so I lined it with a layer of newspaper and an old towel.
It became a cozy place to dry his feet and have a wee nap. 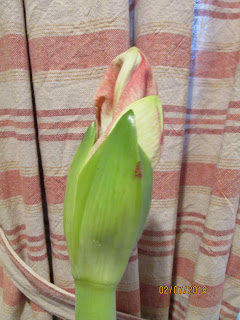 The intricately patterned pink and white amaryllis, loaned to me by my good neighbors, is opening the third and final stem of flowers.  This one has developed at a slower pace than the first two which put forth bloom so rapidly that the huge striped flowers jostled each other for space. 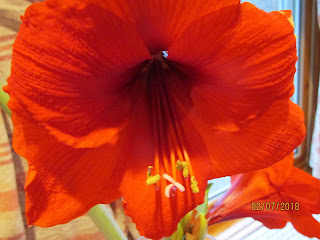 My red Christmas amaryllis is holding to a last bloom on the first stem, while the 2nd and 3rd  stem buds are slowly unfolding.
The red amaryllis is a stockier plant than the other two that have bloomed this season. 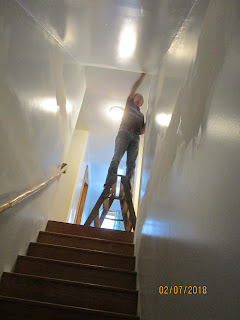 Jim spent most of the morning working on the upstairs double hallway and the stairwell.
This dreaded job is the last major renovation we expect to do.
This nightmarish shot with flash bounced the glow from the ceiling light into a bizarre pattern. 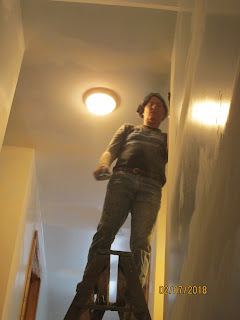 The taping and 'mudding' of the drywall was so poorly done that the only complete fix would be to remove it and start over, which isn't a practical solution at this point.
Jim has grimly patched, plastered, sanded, and we are determined to call it 'good enough' once the off-white paint is applied.
I am mildly amused by the current 'farmhouse' trend in decorating.  The old farmhouses which I knew as a girl were not carefully edited rooms with coordinated displays of 'collectibles.' They were clean, simply furnished spaces: kitchens with a hulking range, a hutch and work table, open shelves, a storage pantry; a separate sink with roller towel above where menfolk coming in from the field or stable could wash up.
Furniture was often handed down through several generations--a rocking chair here, a desk, an upright piano or a cottage pump organ.
The best pieces were gathered in the 'parlor' where the serious faces of the departed gazed down from heavy gilded frames.  Lace curtains, discreetly mended, starched and rehung for the 'best' rooms, dotted Swiss or muslin for the rooms that saw constant family use.
Decorating wasn't done on a whim; fresh wallpaper was chosen only when alternating  seasons of winter wood smoke or glaring summer  sun had dulled the pattern.

When Jim had put away his tools, folded the stepladder and dusted himself down, I tackled the
clean- up, first with broom and dust pan, then hoovering, followed by a wipe down of the stairs and handrail with a damp rag.
I think there is one more session of sanding and clean up before the paint can be applied. 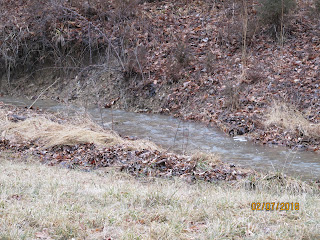 I needed fresh air after stirring up such a dust.
In mid-afternoon I pulled on boots and a heavy jacket for a walk to the lower farmhouse.
The brook was noisy, the air was sharply cold and damp although the drizzle of rain had quit. 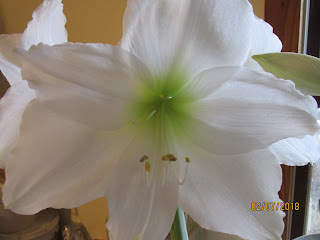 I had my camera with me to record the silky blooms of my friends' amaryllis. 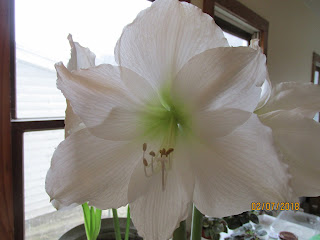 I gave them the bulb at Christmas, 2016.  It spent the summer tenderly nestled in rich compost, growing plump, storing the nutrition needed to produce these luxuriant blooms. 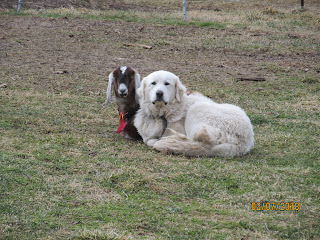 On my way past the pasture, I stopped to record this moment: Blue, the Great Pyrenees, snuggling with one of her doeling charges.

I didn't sew today.
I'm not going to sew this evening.
I'm taking my book and a mug of tea, settling into my rocking chair!

Posted by Morning's Minion at 9:54 PM