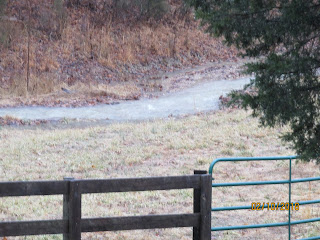 A rare sunny day Friday gave way after dark to torrents of rain. swelling the already brimming brook.  Driving to town on Saturday morning we noted brown water sluicing along the roadsides, spilling onto the highway, standing in sheets that splashed against the car's tires. 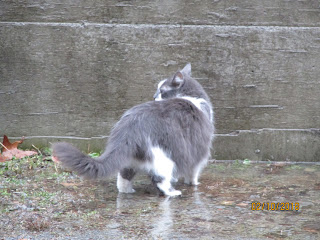 The boy cats beg to go outside, only to be disgruntled that rain is still falling. 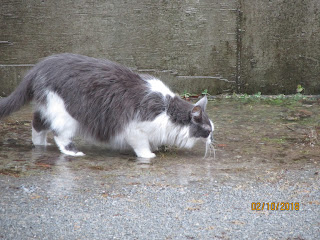 Watching Nellie on one of his forays I was reminded that the three boys as kittens were prone to wading through the rainwater that always settled in a rounded depression in the back lawn of our former home.
Nellie splatted along the retaining wall, took a drink of icy water, before deciding that the warmth of the kitchen was desirable. 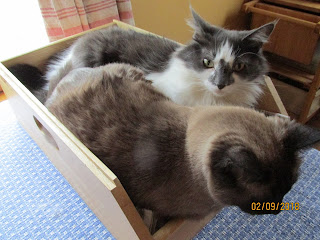 Nellie and Mima are a tight fit in the wooden box set on the alcove table, but neither one wants to vacate. This has become a favored retreat during persistently wet and cold weather. 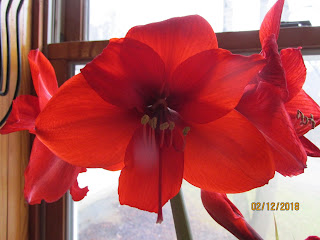 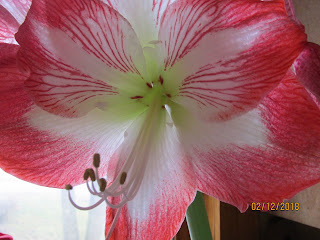 The large plants take considerable room on the kitchen counter which runs under a pair of north windows.
I wish I could stage a succession of blooming plants from November through March.
By the end of the week the amaryllis will have finished their season of exotic color. 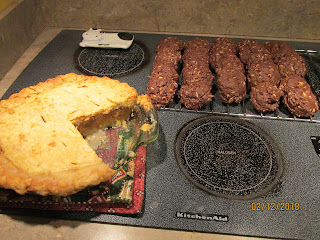 I bestirred myself on Monday to do some baking.
Jim, rummaging in the freezer for a package of venison, discovered the last pie made from our Vermont Northern Spy apples.
Nothing would do but it should be popped in the oven, although I had already decided on making cookies.
I wanted to share food with my neighbors down the lane, so first thing this morning I concocted a kettle of curried lentil soup. [I don't know how to make soup in small quantities, so it becomes a good meal for sharing.]

By the time the soup was simmered to fragrant perfection, the sun had emerged from morning clouds.
I pulled on my boots, balanced a container of soup, a package of cookies for my friends, and a tin of cat food for the barn cat who has an injured foot.
The young does in the upper pasture were quick to notice that I was burdened with containers and hurried to greet me at the fence; three younger doelings in the pen near the back entry of the farmhouse, set up a clamor, hoping that the food I carried was for them.

The convalescent cat was perkier this morning, wanting to hobble about in spite of keeping her stiff hind leg tucked up. B. tided a large wire cage which we set up on the sun-warmed concrete apron of the stable. I held Bonnet the cat carefully while a bed of hay was arranged in the clean cage.  Bonnet grumbled a mild protest when I placed her gently in the pen, but after B. had fastened the clasps on the door, we stepped back and watched as the calico cat curled herself into a relaxed ball, enjoying the sun on her coat.
She will be moved, cage and all, into the stable for the night--a safe place for her as her injured foot continues to heal. 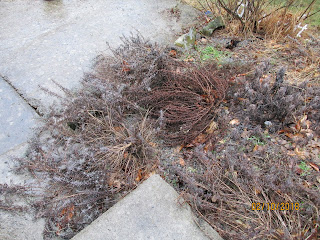 The cold and rainy winter hasn't been kind to the lavender and purple sage that live in the small herb bed at the foot of the side porch steps. The lemon thyme which edges the concrete walk beyond the porch is likewise tattered and shabby.
I considered bringing out the pruning shears--but it is too early. I need to wait until there are signs of new growth. 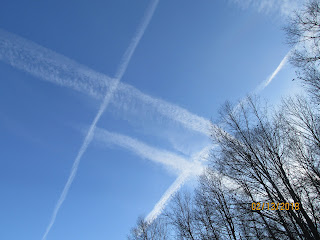 Although the blue sky day was alluring, I headed back indoors, swept and mopped the basement floor, did some mundane household sewing, the daily tidying.
Later in the day I went out with veg trimmings for the compost heap, noted the cross hatching of contrails. 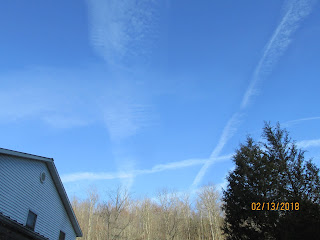 Outside again with my camera I realized that the waning afternoon was taking on a chill.
Bobby Mac and Nellie shot into the house ahead of me when I opened the door, their adventuring over for the day.
Moments later, preparing to wash dishes I glanced out toward the wooded side hill, still bathed in light from the sun sliding behind the opposite ridge.
In that instant a whisk of movement caught my eye--a fox squirrel balancing along a bare low branch.  I watched fascinated as the squirrel bounced to another sapling, ran lightly up the trunk, swung to another tree and scurried down.  I lost sight of him as he scampered along the ground, his coat blending with the litter of weathered oak leaves.

These have been days ruled by the doldrums of mid-winter weather, many of them housebound days.
In between desultory domestic chores I have read myself cross-eyed, peering at my computer screen or with a book open on the table where the lighting is best.
Creativity stirs, but still below the surface--rather like the plants in my winter-worn garden, I seem to be in a holding pattern, waiting for the energizing touch of warmer weather.