A Lesson in Wasted Time 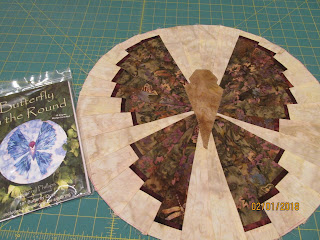 It might have been last summer--or even the previous year--that on a whim, I signed up for a class on offer at the local quilt fabric store.
The Quilter's Trunk in the nearby South Fork community is an inspiring shop--a good variety of fine quilting fabrics, notions, tools, an in-house sewing machine service and repair.  A changing exhibit of quilts large and small is intended to inspire customers.
Classes are offered, featuring new patterns or techniques

I forget the nature of my errand that particular day. As usual I took time to enjoy the projects on display.  The pieced butterflies caught my attention and I noted that a class was being offered.
Before I could find excuses not to, I had paid the fee, reserved a place, and been handed a list of the materials that would be needed.
It seemed that it would be good to challenge myself, to try something different. 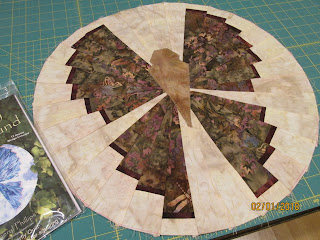 Almost immediately I realized that I faced obstacles.
The pattern wouldn't be available until the morning of the class.
Speaking of 'morning'--the class was scheduled for 9 a.m.--Eastern Time, that is--and we live a few miles into the Central Time zone, making the start time 8 a.m. for me.

Have I mentioned that I am not a morning person?
I am downstairs between 6 and 7 each morning--earlier in summer, a bit later in winter.
I shower, dress, tend the cats. I am not, however, in what could be called my 'right mind!'
I spend the first half of the day doing practical, none demanding chores--house-cleaning, laundry; as the day progresses I'll tackle baking, errands.
Evenings--when I've caught my second wind--are when I feel creative, ready to sew or write, plan new projects, research an interest.

When I'm inspired to begin a quilt or crafting pattern that I've not previously made, I ponder the directions, reading through a few times, making sure that I understand the details before I get started.

The class didn't go well for me, although the instructor is one whose skills I admire.
The pattern booklet was passed out as we were setting up our sewing machines at the long work tables.  The instructor then announced that we wouldn't actually be cutting our fabrics per the instructions as she had devised a method that saved a bit of material.
I had brought with me the fabrics needed in the lengths designated on the sign-up sheet.
I wasn't interested in having a few scraps left over--or in attempting a variation on the instructions, at least not until I had made the project once according to the directions booklet.

I had been experimenting with some of the fancy stitches on my sewing machine the night before the class and belatedly realized I hadn't readjusted and tested the tension settings.  So, from the first I was in 'catch up' mode.
Through out the class I felt that I was struggling to focus, to be alert, to work efficiently.
Most of the ladies were chatty, bright-eyed, zooming along, and had their butterfly nearly done when the class ended.  There were a few who had worked more slowly.
I had completed my stitching, but when I did the final pressing I found that the circular piece wouldn't lie flat.
I came home feeling tired and disgruntled, and with the definite sense that a group class--especially a morning class--is not an option for me.
I put away the unfinished butterfly with the vague idea that 'sometime' I might have a look and see what had gone amiss. 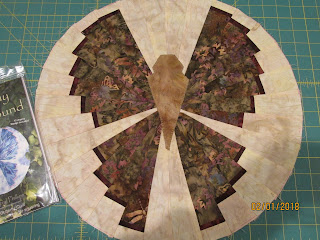 Jim left today after breakfast on a mission to pick up a piece of equipment he found last week.
The day was dark with the threat of rain and I opted to stay home.
I noticed the butterfly project when I was looking for something else recently and vowed that today I would finish it.
The problem didn't seem to be in the measuring and cutting--the pieces matched the heavy plastic template that was part of the kit.
It must be that I needed to adjust the width of the seams to make the thing lie flat.
I was still fussing and fiddling when Jim returned.
When I had done all that could be done short of starting over I wasn't pleased with my work.  I considered putting the whole thing in the fire!

Doggedly I prepared the butterfly body and pinned it in the center--which still wasn't quite flat.
I had stitched around the brown body by hand when I realized I had positioned it the wrong way.
I picked the stitches, repinned, decided to use a machine applique technique--not one of my strong skills, but there it is.  The butterfly is DONE-- other than needing its antennae.

I'm not pleased with my workmanship--and I still don't know what caused the problems.
I could try it again with different fabric--working carefully at my own pace.
I find I'm not really interested in doing that!
This isn't a piece that I want to display.
I may stitch the butterfly onto a cushion cover--at least it would be useful.
I could call it a 'humility pillow'--a reminder that perhaps some projects are best jettisoned instead of wasting hours on an unsatisfactory finish.