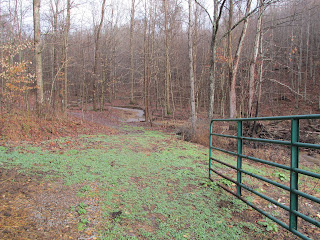 We will recall this December as the month in which rain was the predominant weather mode.
It has been uneasy weather, though we have escaped the damaging floods and tornadoes which have assaulted other areas.
It has been unseasonably warm along with all the wet.
We keep the wood stove puttering along to combat the damp, but have several times opened a window in kitchen or bedroom to relieve a stuffy sense of over-heating.
The track into the woods beyond the stable is squelching and the intermittent brook rushes noisily, swollen with rain. 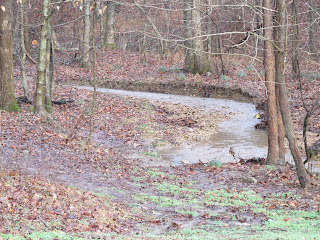 The brook spreading beyond its shallow banks.
Charlie-cat loves to prowl along the edge.
From the kitchen window I often spot his shaggy pale-furred form picking daintily through mud and wet leaves or balancing on a felled tree trunk.
Willis and the tortie girls, spend much of their daytime on the porch, watching the rain, eyeing the birds that flit in the hedgerow, or curling themselves into snug balls on the cushioned wicker bench;  when the rain eases off, they step gingerly along the drive where their feet will stay dry.

Rain has come down in sudden heavy bursts, subsided, then slashed down again.
Thunder has boomed and rattled.
The sun has made a few sulky appearances, heavily swathed in grey clouds, then disappeared.

On 23 December we began doing animal chores for friends who live a scant half mile along the road, so that they could travel north for a family visit over Christmas.

Two hunting hounds who live in a roofed chain-link enclosure with small hutches for sleeping, needed tending once a day--clean water in their buckets and their mix of kibble and tinned food passed inside in shiny metal bowls.
They are large boisterous dogs, barking loudly and bouncing at the kennel doors when anyone approaches.
I knew that I couldn't manage the stiff fastenings on the doors, hand in filled bowls, and avoid being leaped upon, so Jim took on their care.

The chickens needed their feed flung into their small wire-covered yard, water containers checked and eggs picked up from the nest boxes which have a handy outside flap.
We shared that duty, pleased that we had been invited to bring home the fresh eggs,
two to five per day.
The hen's coop has a small uncovered entry and they put themselves to bed at dusk.

I was told there are 8 barn cats in residence;  I counted 6 or 7 at any one visit, several Toms with plush dark grey fur, two  torties, a tabby or two.
They quickly accepted that our arrival signaled the dishing out of their kibble.
They were wary, but not above a quick whisk about our ankles when we entered the barn.

The old house dog and the two house cats became my special charges.
King, a huge yellow lab, is nearly 14, arthritic, eyes rather clouded, a bit deaf.
He needs to be let out to pee rather frequently, the only demanding part of our care.

King has once a day meds--3 tablets and a capsule administered in a wad of soft store-bought bread.
He gulps these down obligingly, only once spitting out a soggy tablet which I retrieved and presented a second time.
I had been advised to take him out on a retractable lead, so that he wouldn't decide to lope off on an adventure.
Several times when I went in he was sprawled on the sheet-draped sofa and didn't hear me approach until I stood by him and touched his shoulder while calling his name.
Other times he met me at the door, bouncing stiffly, eager to go out.

It was raining nearly every time I drove up to tend him--he is leisurely about accomplishing his 'duty' even in heavy rain.  Several times I lingered, waiting for a cloudburst to subside while he fidgeted.
He was attentive as I measured his kibble and stirred in the half can of wet food formulated for 'senior' dogs.
He can be silly, flailing about on his back on the sofa, sending cushions onto the floor, or dragging his stuffed toys from the bin and joyfully flinging them about.
On one morning when I found the small living area in disarray I asked him if he had organized a 'party' after my final evening visit between 9 and 10 PM.

I drove up one afternoon at barely five o'clock--in the rain, already needing the van's headlights. I hadn't brought my flashlight, thinking that the outside motion lights would be sufficient.
Within moments it was very dark, wind whipping, rain pelting down.
The yard lights, for whatever reason, didn't activate when we blundered around the side of the house.
King lunged into the shrubbery edging the building, looped his lead around a small magnolia tree.
I fumbled in the dark to disentangle the lead, while he tugged.
Wind-blown, damp, I emerged from my battle with the tree trunk, but hadn't reeled in the rest of the leash.  King, one foot in a loop of the lead, jogged down the steep yard while I slithered behind.  We fetched up at the edge of the drive, King muddy and winded, me tired of the adventure.
"That," I announced over the sound of rolling thunder, "that will be quite enough. GO PEE AND COME ALONG INSIDE!"

The house cats, Allie and Emma, were mature cats when adopted. Their exact ages aren't known but neither are young felines.
Miss Allie needs to be lifted to the top of the washing machine in the utility room where the bowl of cat kibble is served to prevent King from eating it.
By the second day Allie realized that my visits to take King outside also meant that I would pick her up, give her a cuddle, set her up by her bowl. She nibbles a few mouthfuls then plumps her pear-shaped body onto the floor, toddles off to the sofa or the plush pet mat in the bedroom.

Miss Emma, a small and elegant dark tabby, is regal, not easily impressed.  She was never quite where I expected to find her, sometimes on the back of the sofa, sometimes sitting imperiously on the dining table, once stealthily surveying me from a chair pushed under the edge of the table, her green eyes glowing in the dimness.
She remained aloof, except when I rattled the little container of cat treats.

Our visits to care for the animals spanned 6 days, not too demanding other than the need to be there quite early in the morning to let King go outside, the late evening run, and simply remembering that he needed to relieve himself every few hours during the day. 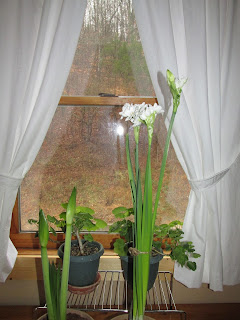 With the weather bleak and dour outside it has been a joy to note the progress of the amaryllis and paperwhite bulbs in an upstairs window.
[It has been dark enough even at mid day to activate the flash on my camera.]
I have marveled at how quickly the paperwhite stretched once growth took off, soon needing to be tied to a twiggy stake. 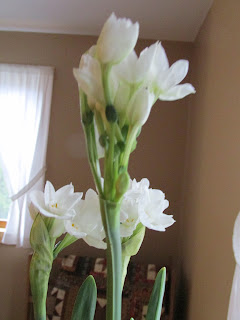 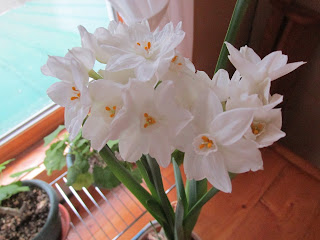 The bulb in full flower.  Its freshness will hold for a few days. 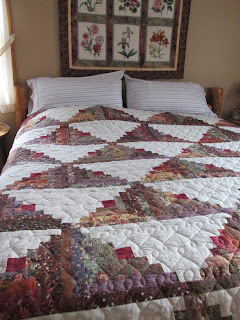 The bed wore a special Christmas quilt and matching pillow cases from early December until the day after Christmas.
Jim and I recalled that last December during our stay at the stone house, we were always chilled.
We had begun renovations here at the farmhouse, leaving the stone house early in the morning and returning after dark to stoke the wood fire in the basement.
It was a cold month, we bundled into bed under the Christmas quilt, fleecy blankets and
a shabby comforter.
This year, we pushed aside the quilt, felt over-heated by the blanket and a surround of furry cats.
I have washed the blanket and put it away, changed the quilt for the lighter one in the photo.
Today the weather has turned again, 20 degrees colder.
The old comforter has been folded at the foot of the bed, handy by, beloved of the cats. 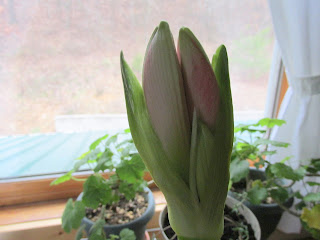 December has raveled quietly away.
Errands have been done, a few simple gifts exchanged.
We have attended church.
We took part in a friend's birthday gathering a few days prior to Christmas, driving at dusk through lashing rain, hitting great swales of water at the edges of the road, arriving at a warm house, brightly trimmed for the holiday.
Good food, wonderful companionship.
Christmas dinner with our daughter and her family--another drive through rain, good hours spent together, then home to tend animals and stoke our own wood fire.

A strange December, our own lives so quietly paced, the larger world in such turmoil of weather, political upheaval, tragedies and distrust.

We make no fuss over the coming of the New Year.
A new calendar unfolded, a different  year's designation to write on a check or to head a letter.
I make no formal resolutions, plan no long-term goals.
I could never have imagined or predicted the changes which the unfolding of our years has revealed.
Changes are brought about by choices, by determination, by hard work, or by mis-chance beyond our own small control.
Each year, each week, every day that we are given is a favor, a blessing, ours to appreciate, ours to make meaningful, for ourselves and for those whose lives touch ours, whether closely or at
a greater distance.