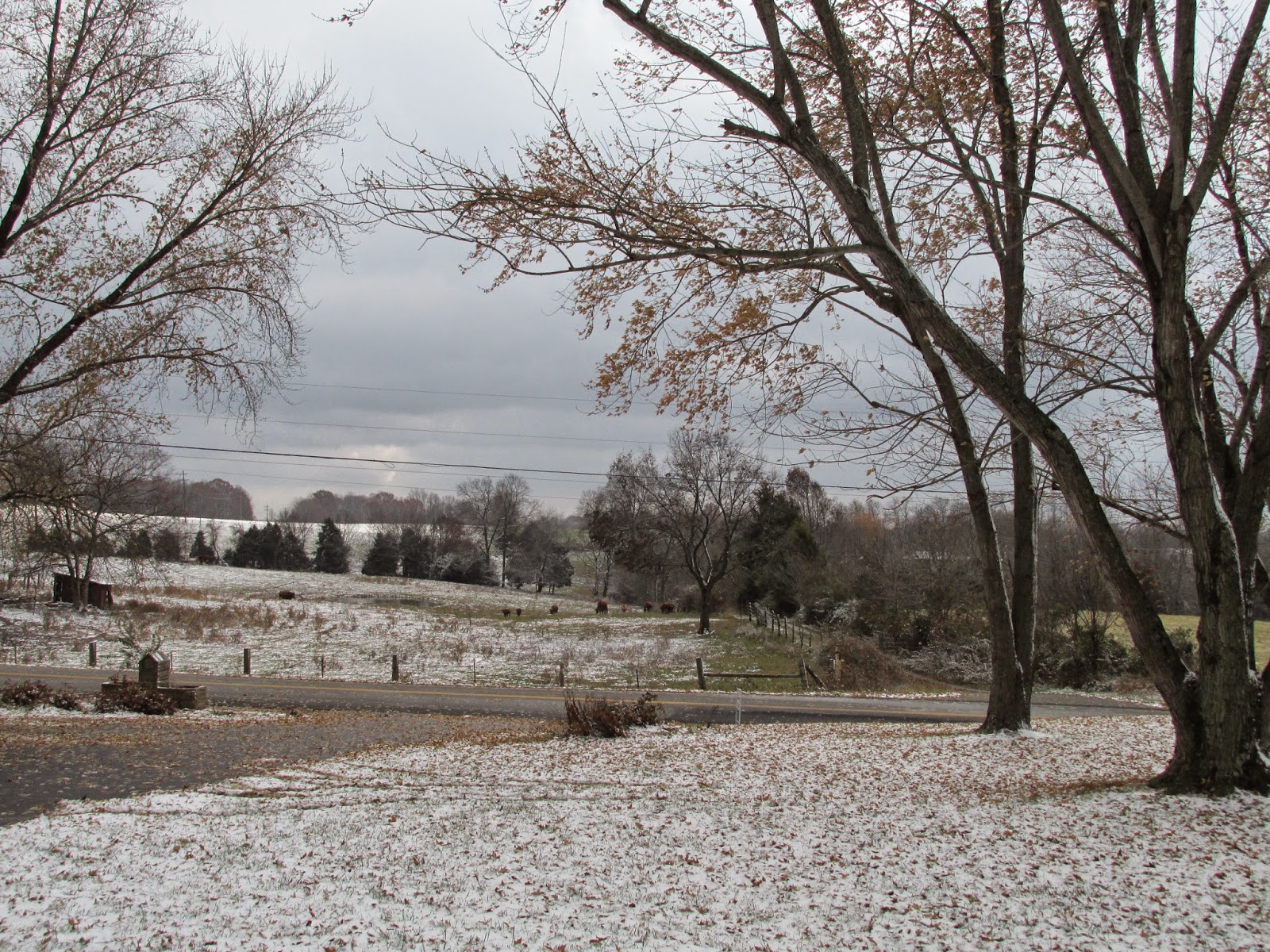 Cold and gloomy weather began on Sunday with a persistent mizzle of rain.
By evening temperatures had dropped below freezing, and snow began to fall during the night.
The wind blew, harsh and raw, for several days.
We told ourselves the cold was nothing compared to that experienced for years in Vermont, and later in Wyoming, where winter's first heavy snow often fell before the end of September. 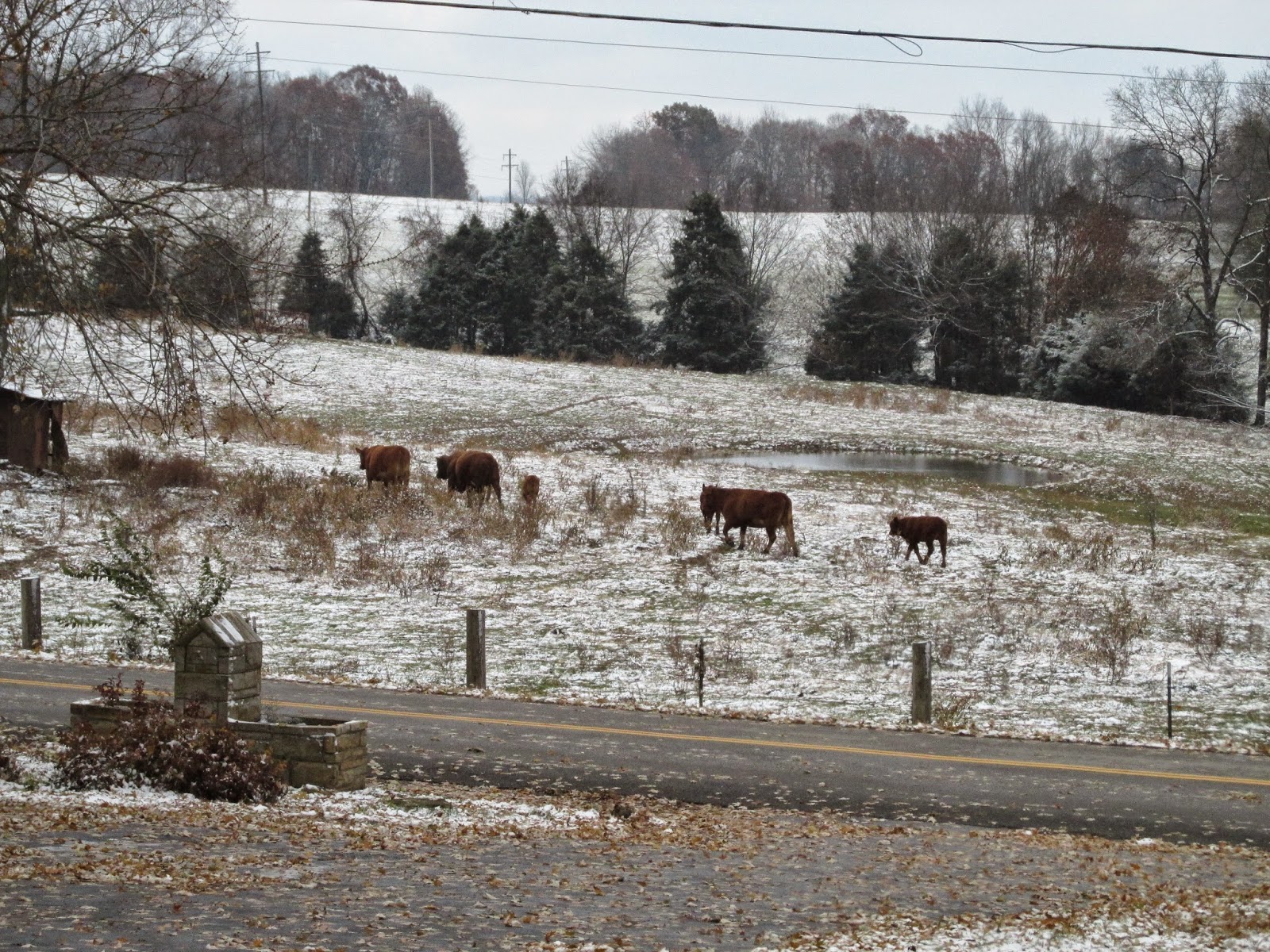 Still we have felt abused: huddling downstairs by the woodstove in the evenings and piling on blankets at night, scurrying down with morning coffee to sit with the cats in front of the glowing fire.
Jim has worked outside at the Amish house, installing the electrical entrance box in preparation for inspection.
Part of the installation was in the leather shop, so he could pop inside, warm up and
watch Mose Miller at his craft.
I drove up on Tuesday to see how my plants had fared.
Sadly, the largest of my rosemary seedlings which I had set in the raised bed, still in their pots, were crisped black by the frost.
I remember wondering what I would do with so many seedlings as I pricked them out in the spring from around the dead mother plant.
If I harbored any doubts, it has become obvious that the prostrate rosemary is the most tender of my several varieties.
Thankfully, I brought the six smallest seedlings into the kitchen where they are flourishing by the window beside the sink.
I have been covering the large upright rosemarys on the front porch here with a layer of towels each evening. 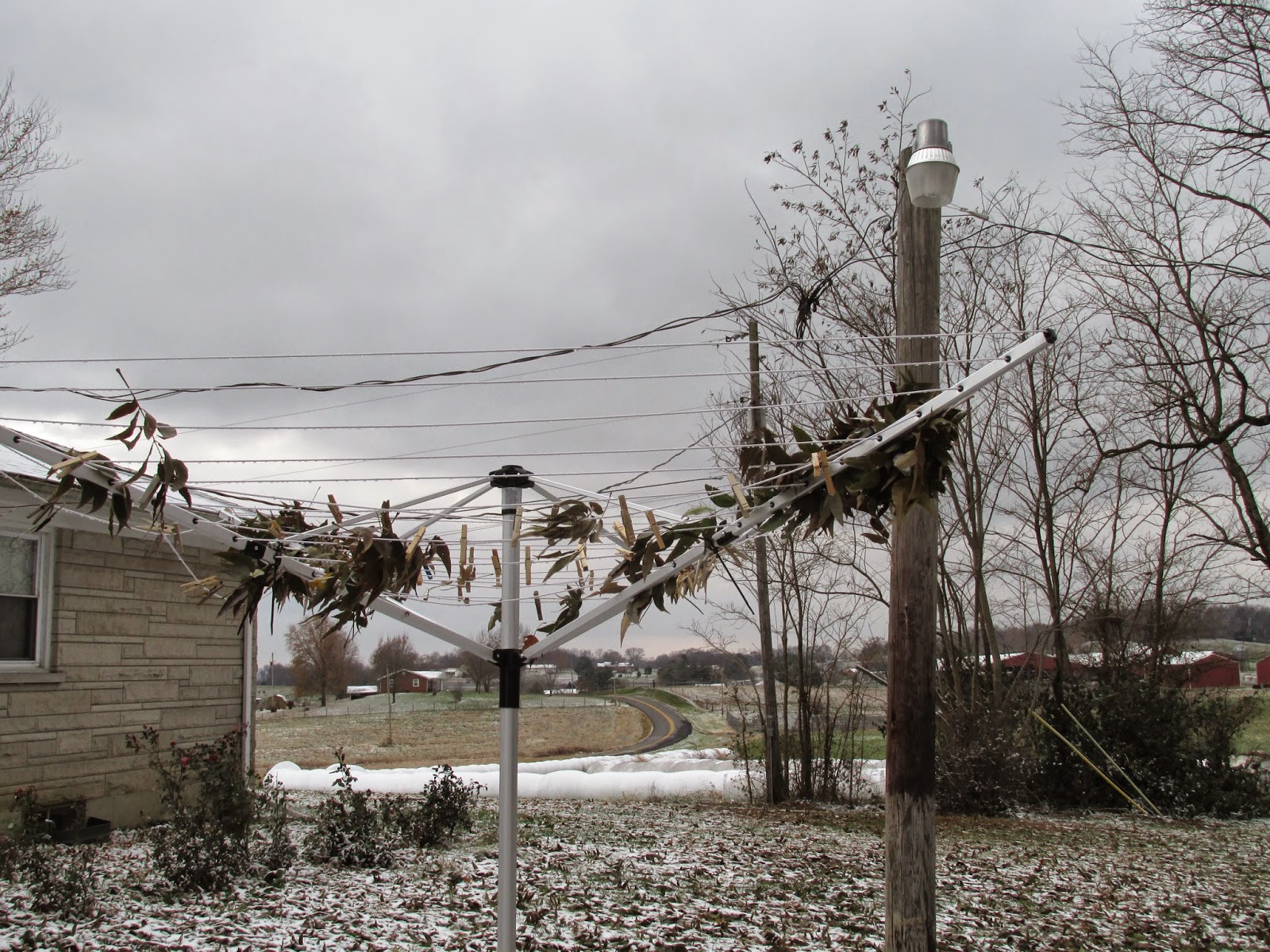 The harsh winds brought down the leaves from the pecan tree.
These fall, not as separate leaves, but complete on the branched stems.
Some lodged in the clothes line, others were heaped, still green, in great drifts on the back lawn. 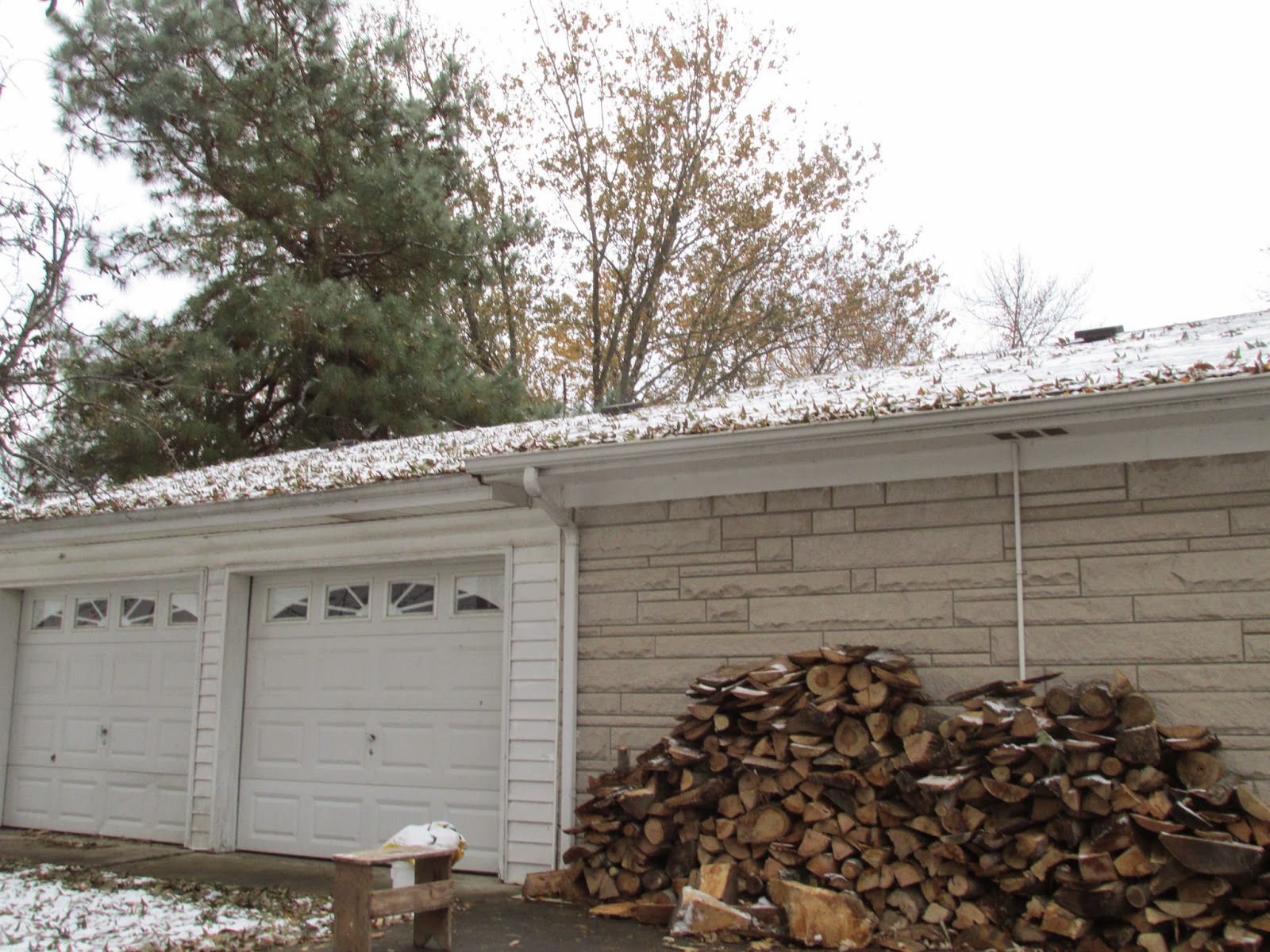 The roof is covered in pecan leaves, bleaching brown under the coating of snow. 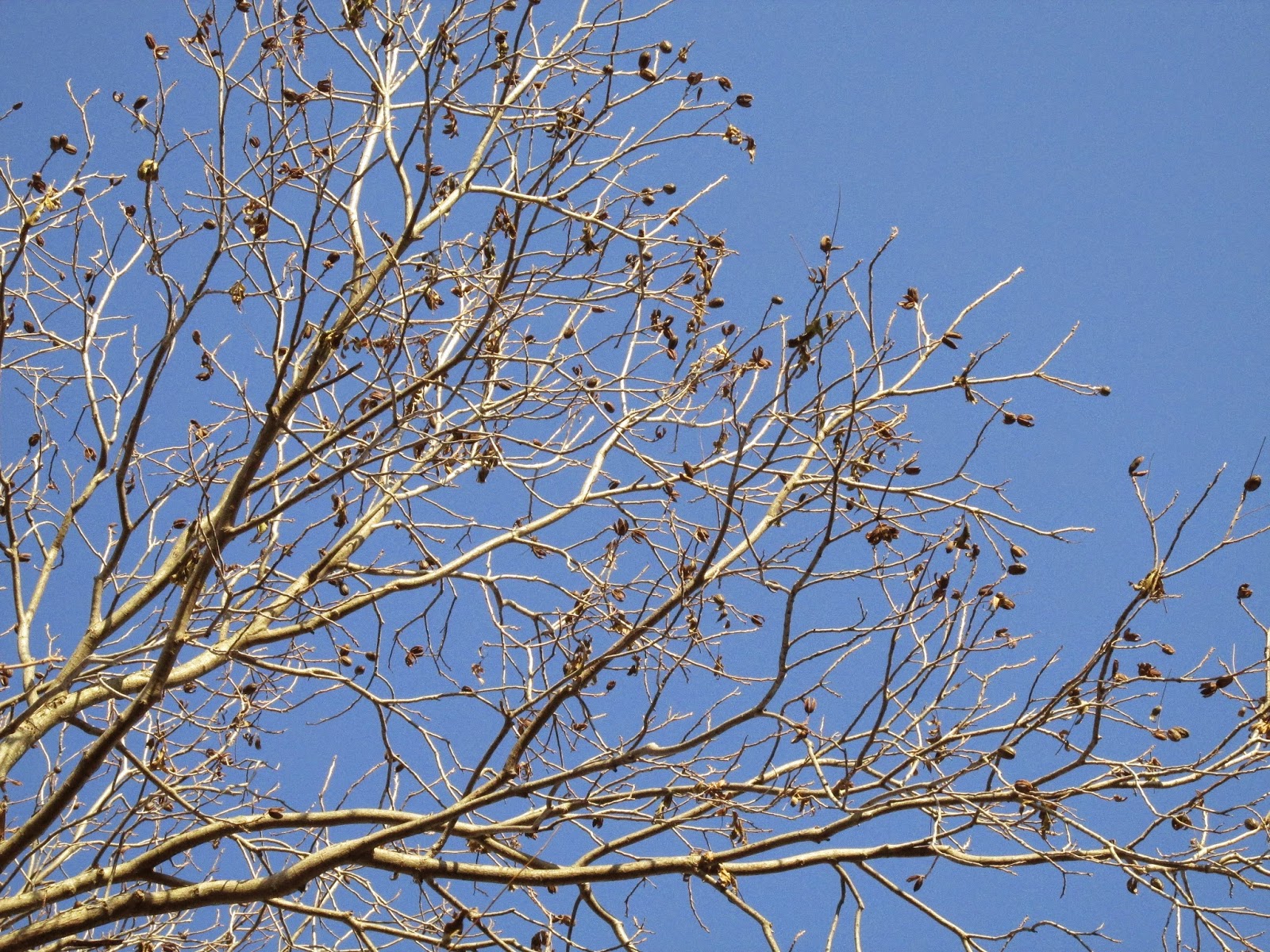 The pecan tree, suddenly bare of foliage, but with the brown nuts still clinging on.

This morning brought sunshine and milder temperatures with only a slight breeze.
I pegged out sheets and towels, cleaned litter boxes.
I trundled the vacuum cleaner about, then went down to the laundry room where my plants, mostly begonias, are spending the winter.
I cut back on watering when I moved them in from the front porch.
Today I sheared back leggy, tired stems, watered well. 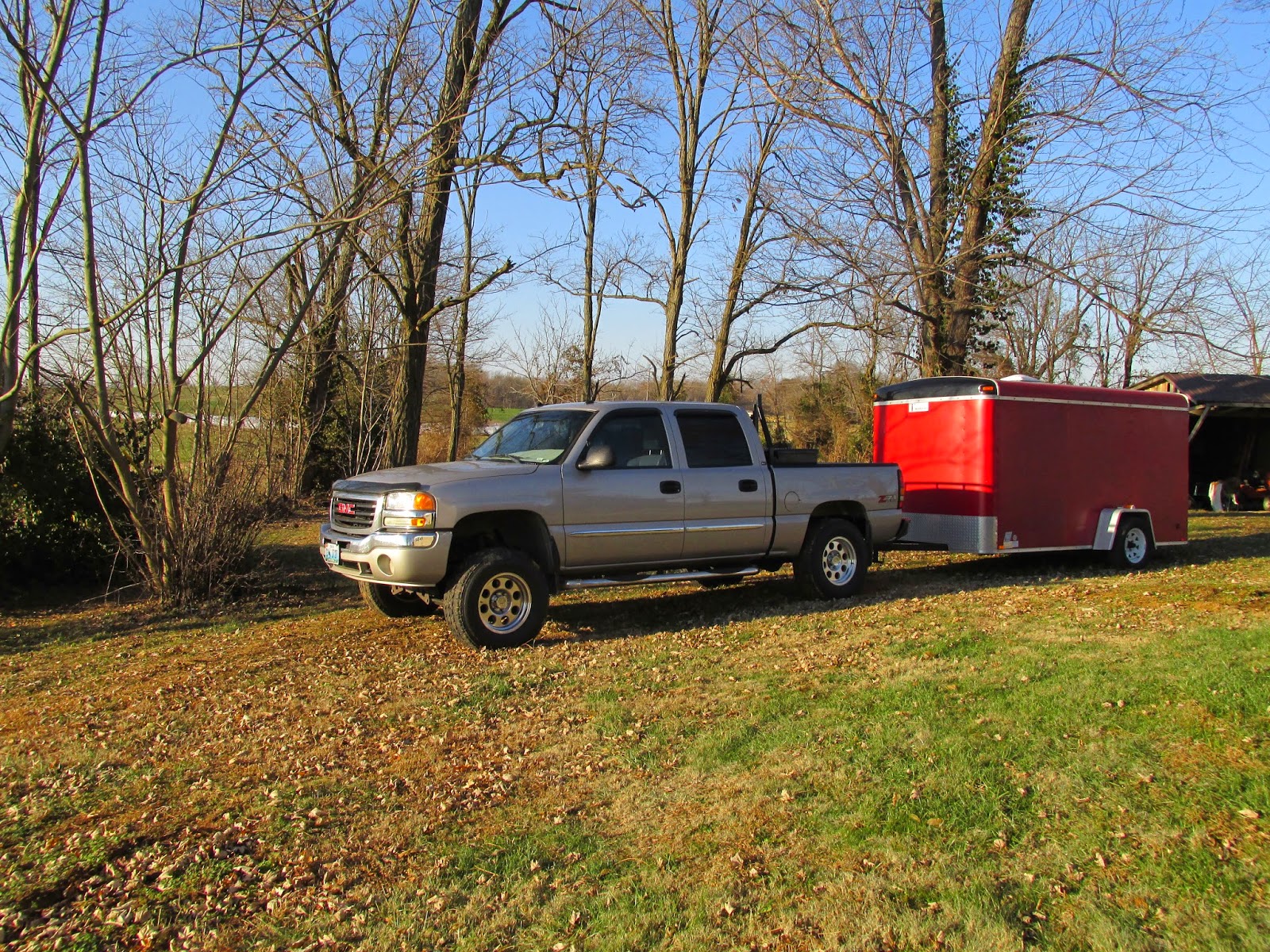 Howard, feeling better from his hard cold, has been out sorting tools into the smaller of his
two trailers.
Jim met with the electrical inspector who 'passed' the preliminary installation.
The Millers are collecting themselves for the move to our former home, a daunting process with all the specialized machines and tools for the production of harness.
Since the Amish do not own motor vehicles, they must hire local men with trucks and trailers to move them.
Early next month Jim will begin wiring the house which we will eventually call home. 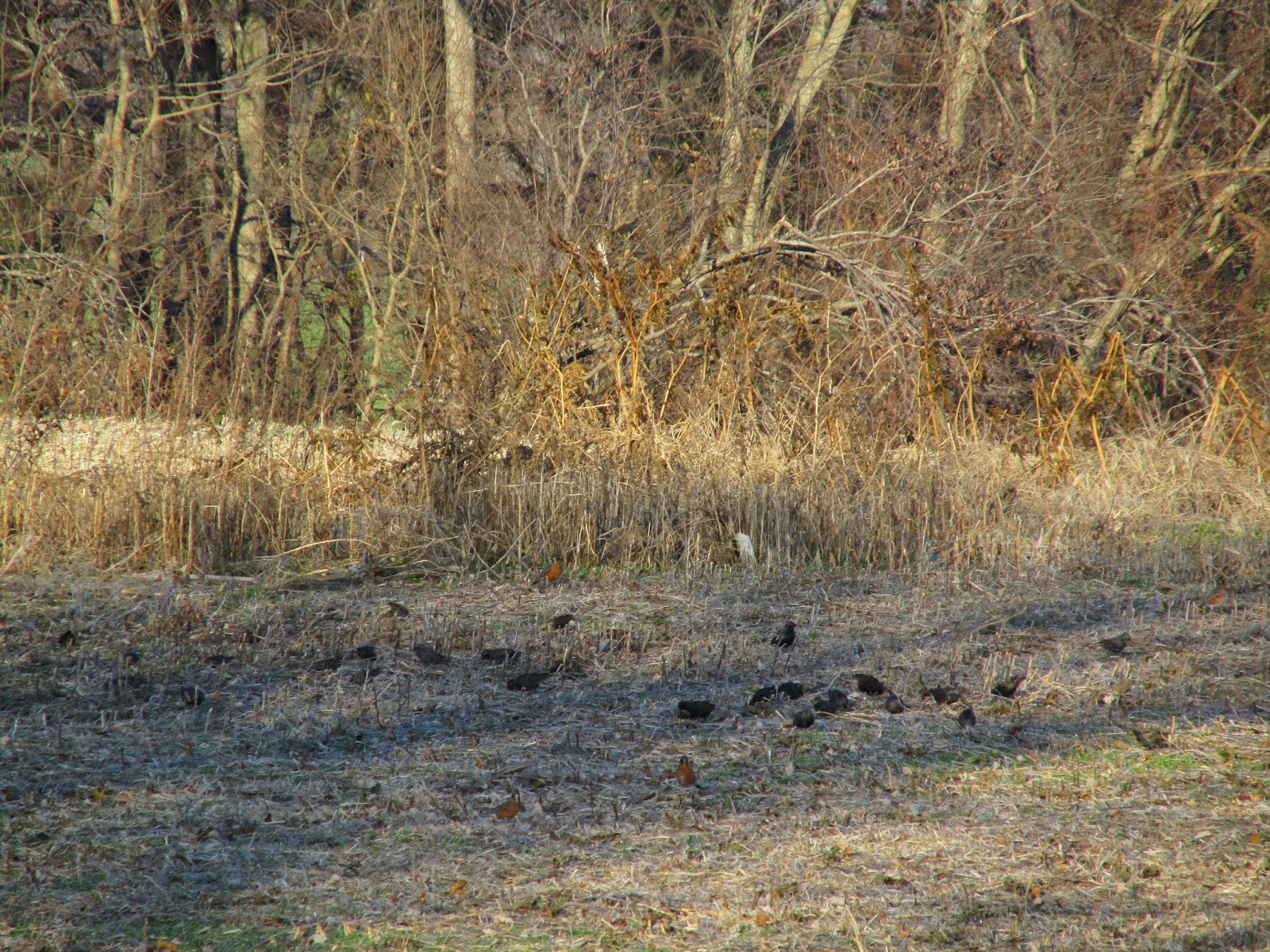 Robins and blackbirds [I think] gleaning in the soybean field.

While this undertaking is exciting for us, the day to day progress reports don't make for interesting reading.
I feel that I am 'marking time'--trudging through necessary domestic chores of cooking, laundry, cleaning, small errands.
I am rather curiously detached from this house where we spent so many hours of the past months refurbishing and redecorating.
Our plans changed so dramatically just as we began the moving in process--there has been no real establishment of routine, no need to organize and settle in.
I am often tired, sometimes a bit daunted by the project we have undertaken, a bit anxious about the necessity of selling what has become the 'interim house.'
I am also excited, enthused, visualizing the Amish house at the end of the lane as it will be when we have converted it for the ways of "Englishers."
We've been in quite a number of houses since leaving Vermont in 1998; none of them has whispered 'home' to us in the manner of the Amish farmhouse which has captured our fancy.