Its difficult to find a comfortable spot to ride when the van is full of roses,
flower pots, and rolls of insulation. 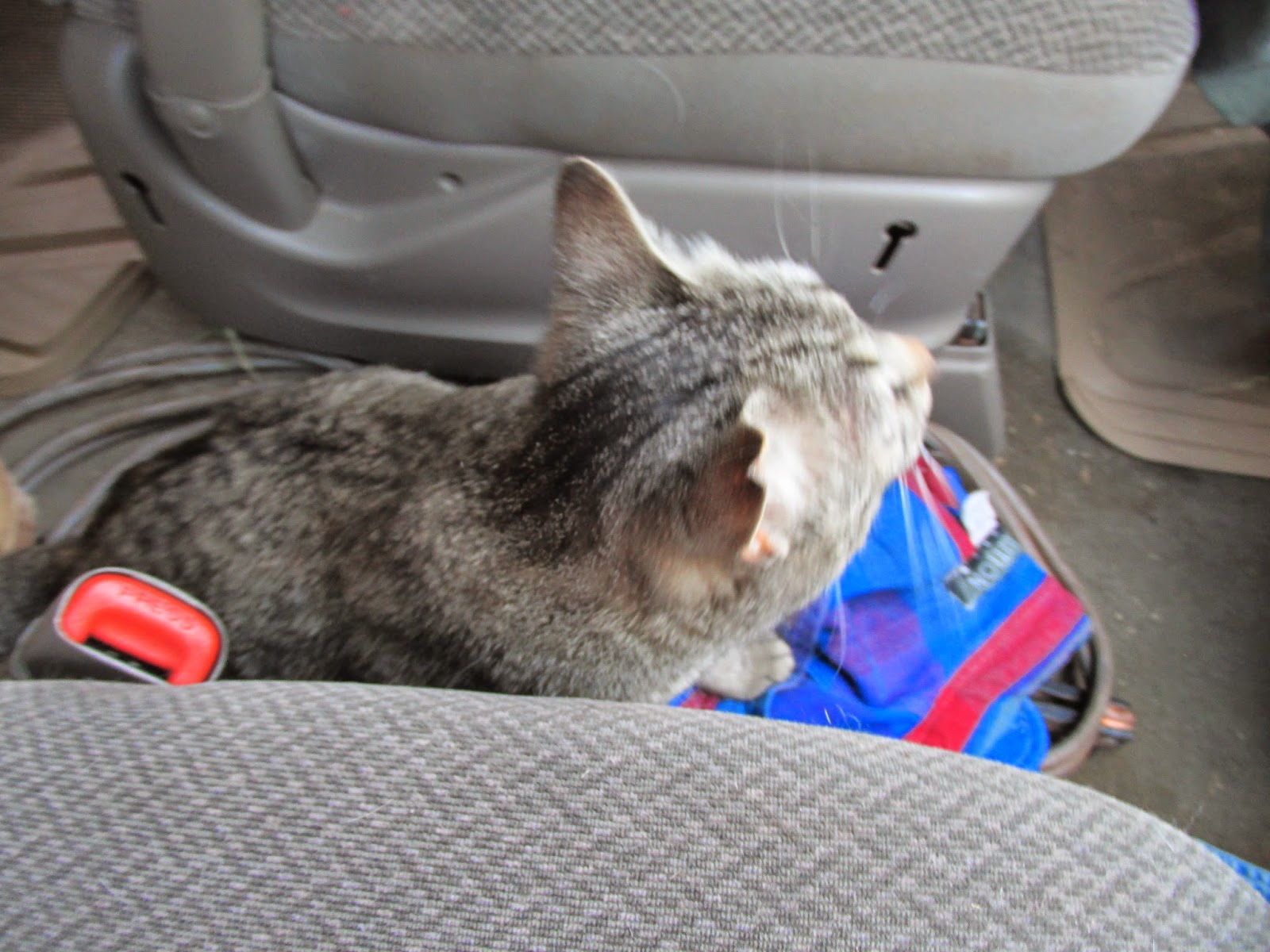 Not much better in the front--at least there's a soft flannel shirt on top of the coil of battery cables. 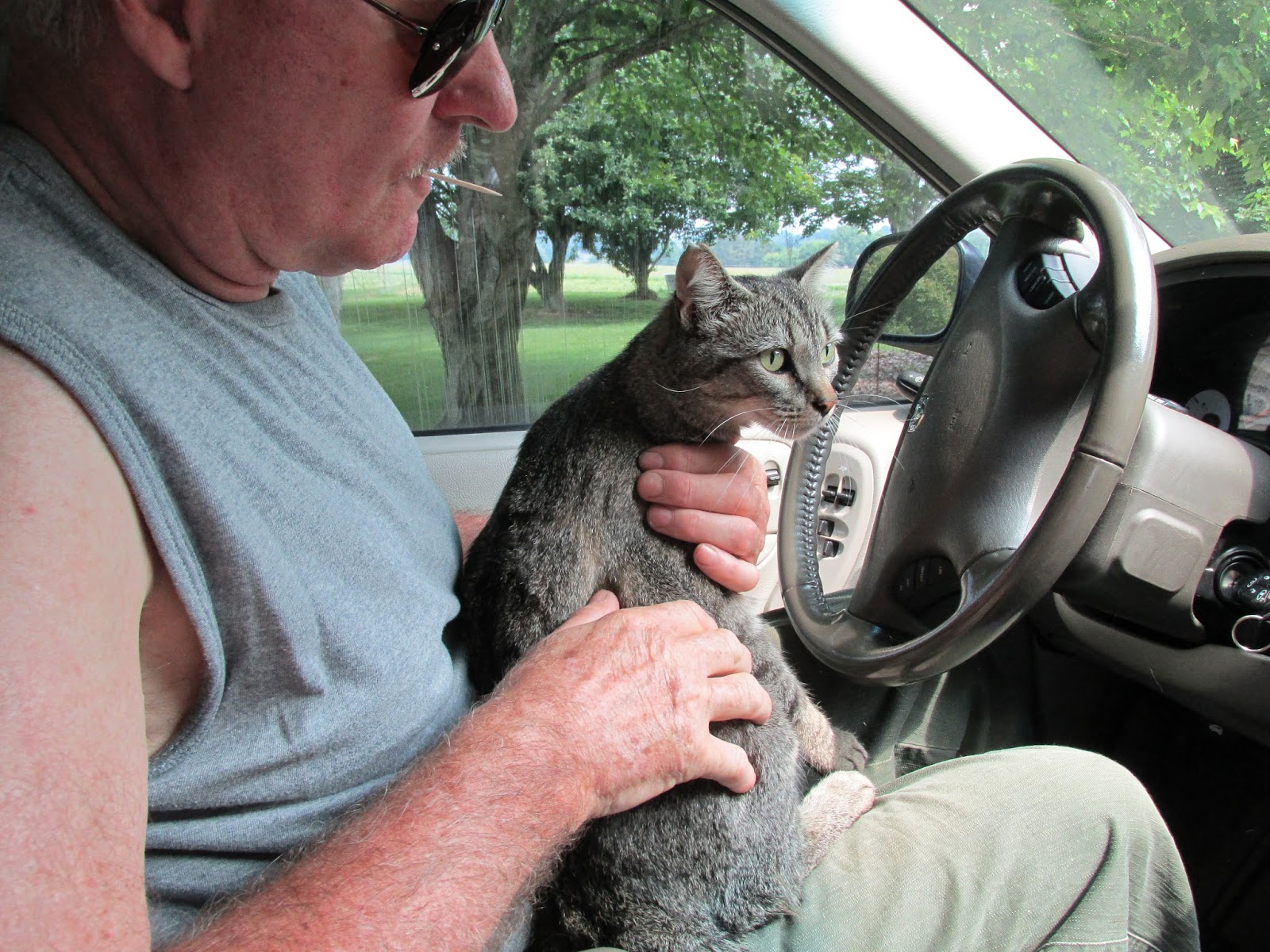 Returned to his own dooryard.

The advent of Willis the Cat came early in our first Kentucky summer--2010.
Jim rode the 4-wheeler across the north field and seeing our neighbor Dale in his driveway, stopped for a moment to visit.
A gangling, half-grown cat ambled across the road to sniff at the tires, rub against Jim's boots with a
tentative purr.
"T'ain't my cat!" stated Dale. "You'd better take him home with you before he gets run over."
The tweedy-coated feline reached a hopeful paw to pat Jim's pants leg, mewed beseechingly.
Jim, soft-hearted but skeptical, replied, "No cat would ride on a 4-wheeler."
He did just that.
I looked up from my careful planting of bean seeds when the 4-wheeler rumbled to a stop by the
garden fence.
The young cat waited a moment in the silence, easy under Jim's hand, then hopped to the ground, stretched and looked about with an air of satisfied possession.
"Meow," he said. 'The name's Willis. I think I'll stay."
In the following weeks Willis strode about, acquainting himself with the territory.
He lorded it over the tortie sisters, his own age, whose arrival at the farm had pre-dated his by several weeks.  He patrolled the dooryard, showed himself adept at mousing, offered his help at every outdoor task.
As summer ebbed into autumn, Willis declared his right to come inside for the occasional warm-up in front of the fireplace.
Jim advertised baled hay for sale that first winter and we soon discovered that Willis had a passion for pickup trucks. A door left carelessly open invited a feline inspection. Checking for the presence of a small striped cat in a customer's vehicle became part of the drill.
A window left part way down on a vehicle in the carport was likewise an invitation for Willis to commandeer the space for a catnap.

At a neighborhood picnic in September, 2013, I learned, by chance, the likely origin of Willis.
Chatting with Betsy, an animal lover who lives a scant mile along the road, she made mention of her brother's kittens, Lewis and Clark.
Betsy's brother owned a machinery repair business, working from his home shop on a dead-end lane.
His young stripy cats had a habit of jumping into customer's vehicles or into his own truck which he drove to service calls. On a late summer day in 2010, one of the 'boys' went missing.

Betsy had noted the resemblance to the photos of Willis which have appeared on our local on-line magazine.
We concluded that Willis, a stow-away passenger, had once too often hidden in a vehicle, only to be turfed out at the end of the lane.  Instead of making his way home, he instead sauntered down the road, pausing to collect himself as Jim drove by on the 4-wheeler.
Considering the past behaviors of Willis, it shouldn't have been a surprise when a sleek dark form slid between the front seats of our mini-van as we headed down route 80 on Tuesday morning.

Willis had appeared, his usual helpful self, while I dug up and divided perennials to take to the Cane Valley property.  He must have been underfoot as Jim loaded in some lengths of insulation. Where was he when we loaded in plant pots, two bare root roses, various tools and buckets of paint?
Willis hopped on my lap, sniffed around Jim's feet, then retreated, worming his way through the insulation and making himself comfortable among the prickly spikes of the roses.
He stood on the driver's seat, paws braced against the window while we made a stop at the Burris woodworking shop. He was settling in for the ride by the time we detoured back home to decant him, with thanks, into the carport.
He shook his tweedy coat into place, washed a paw, then stalked off towards the garden as we backed the van and headed out for the second time. 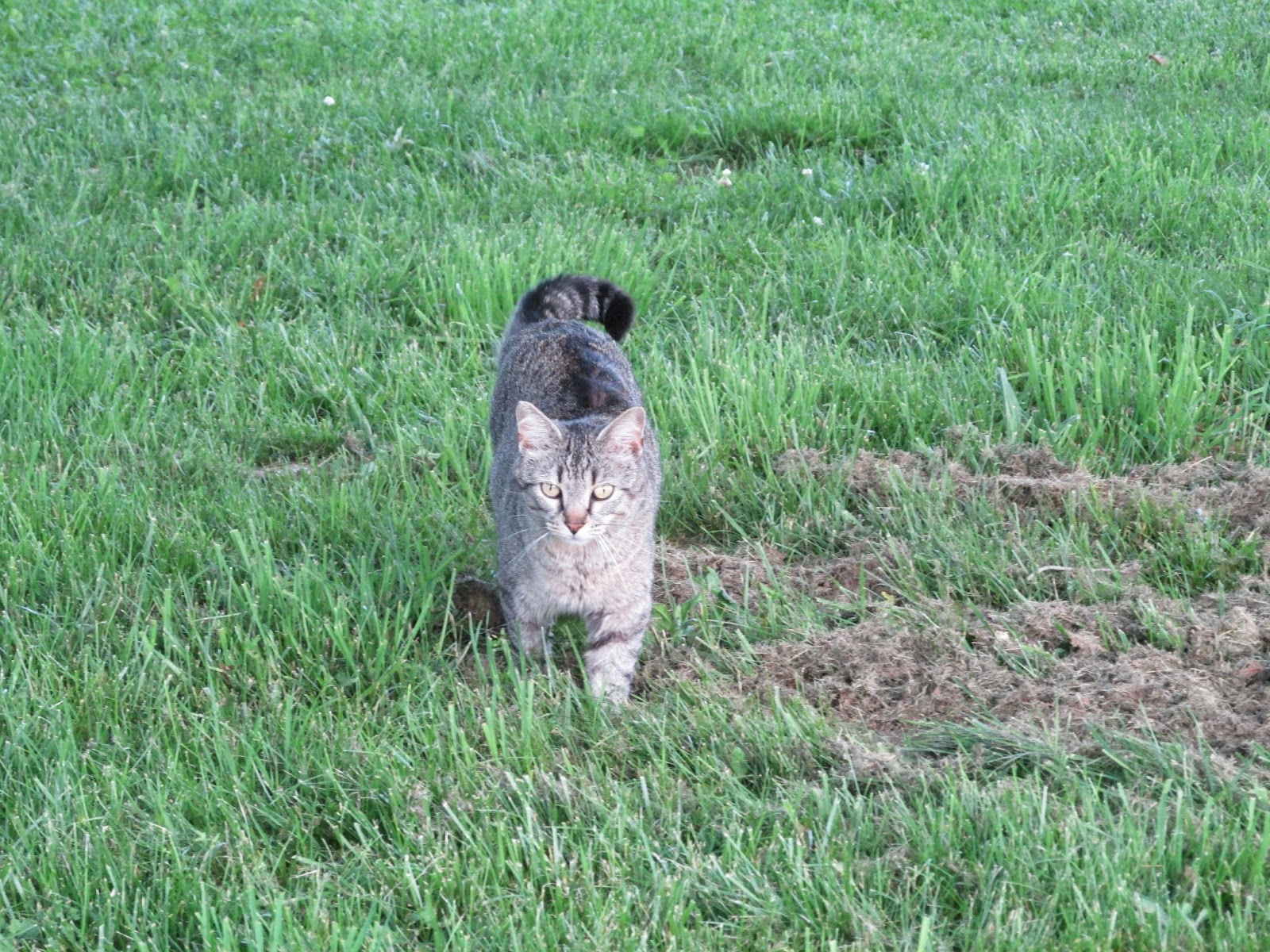