Sunshine [At last] and Frost 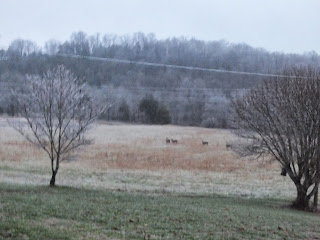 Sunday morning saw a landscape of trees, grass and power wires furred with frost.
Mist hung in chilly clouds.
When I drew back the living room curtains, deer were clustered in the front meadow.
I crept out quietly with my camera, but they sensed I was there on the porch.
They began to move off, coughing and wiffling nervously. 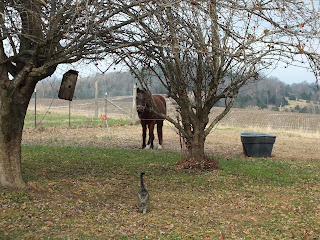 The sky lightened a bit on Monday, although it couldn't be called a sunny day.
J. has been breaking a skim of ice in Pebbles' water trough each morning.
He is assisted on his morning rounds by Willis. 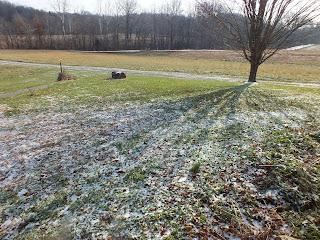 A light dusting of snow greeted us on Tuesday morning.  The sun came out!
A powdering of snow lingers in a few sheltered hollows, although the harsh weather which struck many places in the east passed us by, leaving us with chilly nights [slightly below freezing] and days which have a nip in the air. 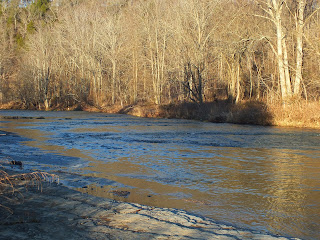 After so many housebound days [between weather and having a nasty cough] it has been a blessing to bundle up and walk outdoors of an afternoon.
The light this time of year alters colors; dried grasses and weeds which look dull and grey on an overcast day, take on a mellow amber-gold beneath the low-slanting sun.
The creek, seen here at the ford, has a deep blue sheen from the reflected clear sky. 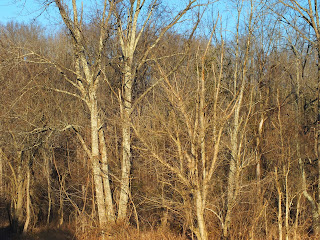 The bare trees are stark against the sky. 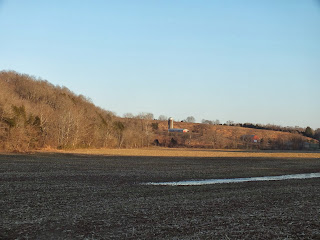 A walk at 3 in the afternoon, along the road which winds south down the valley.
The view is of a neighboring corn field, long since shorn of its crop.
On these shortest of days, the sun slides off behind the ridge to the west, leaving the back yard chilly.
Gaps in the ridges offer sunlight glow still along the road or in our front meadow, but the cold of early evening moves in, causing me to quicken my steps where the road is shaded. 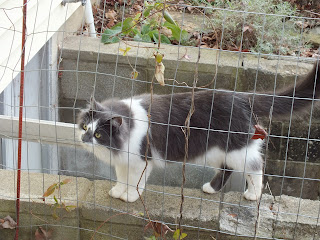 Nellie considers jumping into the cat yard to gain entrance to the house through the sliding door.

The cats who have outdoor privileges have been more willing to come in at dusk--or even a bit before as the late afternoons grow cold. Bobby is the most determined to stay out late--prowling through the tall cold grass of the back field.
Once they've been collected inside for the night, we are amused by the feline jostlings for the warmest spots in the living room: the hearth rug, the fleece throw on the love seat, available laps.

I have spent two evenings in the living room, watching TV with J.--a most unusual past time for me.
I became enthralled with the BBC series, Land Girls, and have sat there, mug of tea at my elbow, a cat or two sharing my chair.
Of course series 3 ended with a cliff-hanger or two and many unanswered questions.
Now we must wait for the final episodes to become available on Netflix.
I remarked to J. that I would rather have my drama in book form.
He argues that it is better to 'see' it played out.
I have enjoyed the country settings of Land Girls and especially the period clothing.
Still--I recognize that I have a vivid imagination, one that is easily impacted by too much visual stimulation.
Perhaps next week I will make up a fire downstairs and quietly retreat there to sew.
I suspect I have gone into hibernation mode!