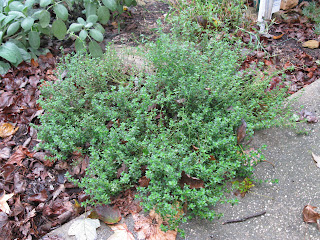 Mornings have continued to be cool and misty.
Yesterday I went out in J.'s old raincoat and my wellies to give Pebbles her grain and to feed the barn cats.
Pebbles had her hooves trimmed on Tuesday and is looking very smart.
I went into the upper garden to dig a few carrots for the beef/barley soup I had promised D.
Pebbles lurked near the fence knowing that she would be offered a carrot.
In spite of the drizzle I was reluctant to hurry inside.
I snipped fresh thyme, marjoram and parsley for the soup and brushed fallen maple leaves from the small lavender plants which I raised from seed. 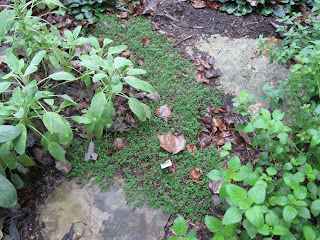 The creeping thyme which I planted around the stepping stones in the herb garden has spread
into a springy mat. 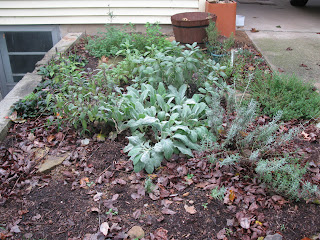 I had several catnip plants in the near end of the herb garden but removed them as they were very invasive.
I'm hoping the lavenders will over-winter and that the two seedling ones in the forground
will thrive and spread.
I need to add some low-growing plants along the cellar stair wall at left of the photo. 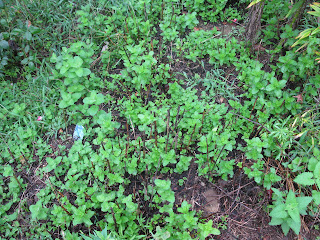 Kentucky Colonel Spearrmint, Apple Mint, Lemon Balm and Catnip are growing in front of the Red Knock-Out Roses by the garage wall. By August the mint stems had turned brown and the leaves had lost their  savor. I cut it back and the recent cool rains have inspired it to flourish. It is possible to pick fresh catnip through much of the winter here.  New leaves huddle at the base of the stalk waiting to shoot up at the first sign of spring.  I may dry some catnip for winter as the cats love to wallow in a handful sprinkled on the kitchen floor. 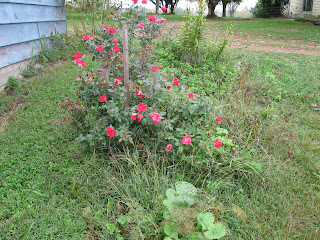 Red Knock-Out Roses.  I have been disappointed in the hollyhocks [foreground] as some sort of tiny caterpillar turns the leaves to rusty lace. The hollyhocks which managed to blossom had rather feeble pastel colors which looked bleached out in the heat of summer.  I may ruthlessly uproot these! 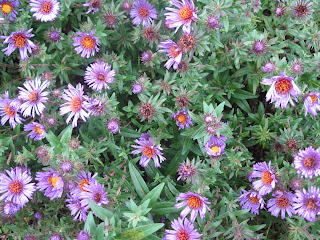 The Michaelmas daisies by the grape arbor are at the height of their bloom. 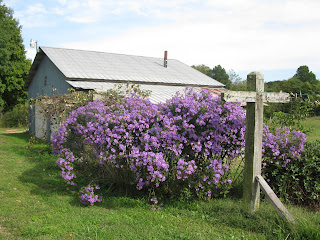 This is a very tall variety as you can see here. 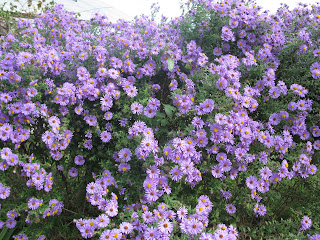 The scent of the Michaelmas daisies is brisk and clean. 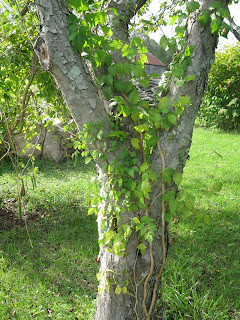 Trumpet vine threatens to take over any plant or structure that it uses for support. J. pulled it away from this crabapple tree in the spring but it has crept back.
In New England a trumpet vine was something to be coaxed through the winter.  If it managed to send up hesitant shoots, let alone flower, it was a triumph.  Here, it is an invasive pest.  There are many volunteer plants in the dooryard, massive vines have been pulled down from the old barn walls, still they spring up along the boundary line woods and in the pasture. 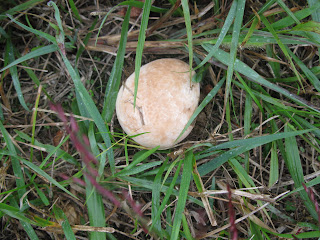 These "puffballs" are edible.  J. has been slicing them to fry with onion, green pepper and sliced okra.
They taste very similar to Portobello mushrooms. 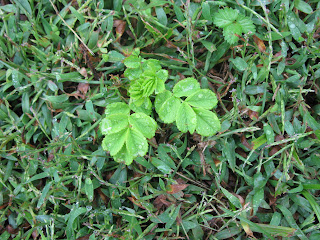 I have felt that my rugosa roses were not flourishing, perhaps not adjusting well to such hot and humid summers.  Roserie de l'Hay has put out a runner which has resulted in this  new seedling which I will carefully replant in the border.
There are still many garden chores to be done before cold weather, late crops to harvest.
Today I gave in to the need for some quiet time.
With the horse and cats fed, litter boxes clean, and breakfast cleared away, I pulled the wicker loveseat into a sunny patch on the front porch and made myself comfortable there with a book and a mug of tea.
J.'s old Raisin-Cat prowled around the yard, then came back to sprawl in the sun for a meticulous bath.
She surprised me by leaping up to my lap--which required that I move my book to accomodate her .
We stayed there until the sun slid around the corner of the house leaving us in chilly shade.
I tipped Raisin off my lap, unfolded myself and came inside to heat left-over soup and toast a bagel.
My book kept me company at the table while the cats milled in and out the sliding door.
They have been restless and twitchy this week, perhaps echoing my own response to the unsettled weather. 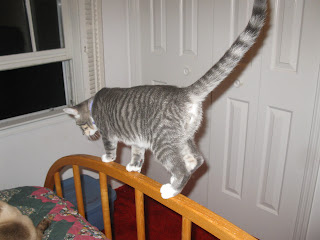 Willow prowls;
Charlie has made a bed in the laundry basket.
Raisin and Teasel are politely edging each other for possession of the big rocking chair.
I stand at the sliding door for a moment, sniffing the cool scents of a damp autumn night, listening to the faint chirring of the cicadas, no longer the noisy nocturnal presence of July and August.
Across the hall pillows are piled invitingly at the head of the bed and there are books on the small table.
Perhaps if the mistress of the house leads the way, the cats will agree that it is time to call it a day!
Posted by Morning's Minion at 12:32 AM