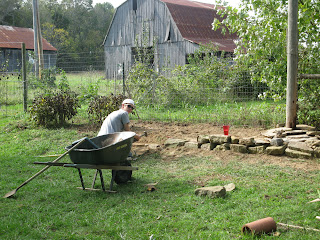 I have wanted to spend every sunny moment puttering outside.
Many garden chores remain that couldn't be done during the weeks when the weather was so hot and dry.
D. came over on Sunday afternoon wanting 'something to do.'
I suggested he might mow the grass--roaring about on the lawn mower has a certain appeal for him.
He knew that I have been wanting to move some of the rocks that form the boundries of an old flower bed and this was the task that he chose.
Within days of arriving here in March 2010, I discovered the legacy of the two peony bushes at the edge of the area we chose for the main vegetable garden.  It wasn't until early July this year that I tackled clearing along the fence line with the thought of putting in more peonies and some filler plants.
I grubbed away, pulling out clumps of tangled grass, disrupting a mole run, wrenching at some tenacious and un-named prickly shrubs.  I persisted, laboring in an afternoon of 90+ [F] heat until I realized that I was becoming light-headed!
It seemed wise not to continue this project in the punishing heat of high summer.
Time was that I would have tackled moving rocks or digging up roots--and suffered the physical consequences with an air of 'mission accomplished.'
I can't say I am wiser now--I simply recognize that wishing and willing to do a task that requires physical stamina isn't realistic. 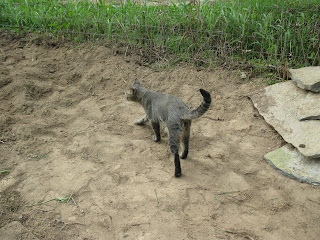 D. tore into clumps of grass and the wiry roots of the bushes with shovel and  the small tiller, while I followed on hands and knees to grub out and pile the loosened debris and unwind poison ivy vines.
Willis, as usual, joined us to inspect our work.
He behaves as though any turned earth is for his benefit! 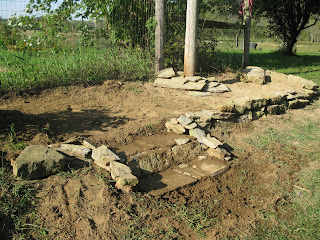 The area isn't ideal for a flower bed.  The water maple on the other side of the fence sends out the vast shallow root system typical of the species. The utility pole must be worked around.
D. chose large flat pieces of stone and angled them around the base of the pole.  I will be watchful whether the poison ivy sends up new shoots around the rocks.
[If so, I shall be ruthless and hit them with Round-Up!]
D. took advantage of the slightly sloping ground to create a rustic stone step up into the little garden. 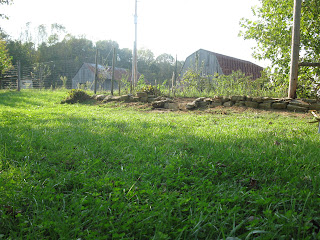 We had to quit before we were quite finished.
There are a few more rocks to be placed on the far end of the wall and dirt needs to be
barrowed down to deepen and level the planting area.
I have two young peonies in the perennial bed to move here.  I have divided the clumps of iris which we rescued from the weeds; they will be set along the right side of the bed. I have two varietes of nepeta--Walkers Low and Sibirica-- which have gone rampant in the rose border.  I will plant some at the back of this new bed where it can do battle with the encroaching grass and spread itself along the fence.
I think that thyme or some low growing 'pinks' would make a nice edging.
Another summer I plan to till [have someone till!] along the fence on the veg garden side and plant sunflowers where they will have the support of the sturdy wire.
My kind of flower gardening is very informal, a rather rustic interpretation of cottage gardening.
D.'s creation in rough stone gives me the sense of a New England farm dooryard.
Mr. Rogers, the former owner of the place, stopped by today with a gift of
watermelon seeds for next year's garden.
He told me that the rocks we are using are some which he salvaged from a massive stone chimney, demolished, as was the old farmhouse on the site, to make way for our present small house, built in 1980.
I like knowing these bits of homely history. 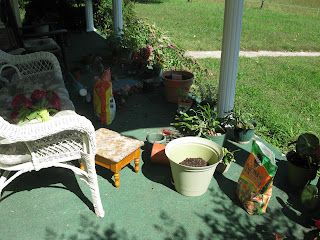 Today was beautiful and sunny.
I had coffee and a bowl of warmed apple crisp while sitting on the front porch, then hauled out sacks of potting soil, an assortment of pots and such.
The rosemarys needed potting on as did the beefsteak and angel wing begonias which have spent the summer on the porch.
I consolidated three Christmas cactus into one large pot.
[The Christmas cactus is one of only two plants which survived the move from Vermont to Wyoming 13 years ago.  My large rosemarys, begonias, and an assortment of geramiums all turned up their toes and died in protest over the alkaline content of the water there.] 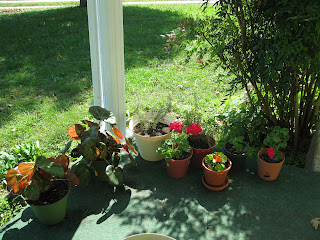 Sun splashed over the south-east end of the porch all morning.
I went down to the creek and picked up small stones from the gravel track, using them for drainage in the bottoms of the flowerpots.
I like to make a rather gritty light soil mixture for rosemarys, but found that the local Wal Mart has put away all their gardening supplies--no bags of vermiculite or builders sand--or even mulch, so all my plants
have to thrive, willy-nilly, in the all-purpose mix still available in ridculously small bags. 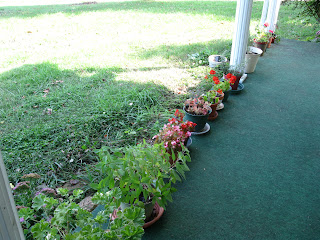 I made a grand mess on the porch: spilled soil, pots which needed to be scrubbed, prunings, clay shards from a cracked terra cotta pot which I bashed up to serve as drainage pieces.
The larger jagged shards are stuck in the soil around the repotted plants which will be coming inside for the winter, as Charlie Cat and his children have a love of making 'salad' from house plants. 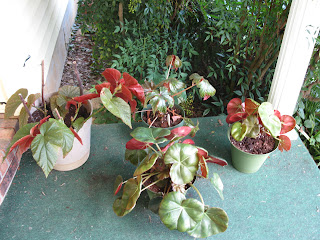 The Angel Wing begonias are offspring of  one that came from Vermont.  Heidi took cuttings before the original plant succumbed to the alkaline water and gave me several small well-rooted plants.
They were quite battered after a winter of cat attacks, but  summer on the porch has given them new life.
I am hoping the bristling stakes of bamboo in the pots will deter feline interest.
A friend started the beefsteak begonias for me a year ago when I admired hers.
I have had these since late June and they were ready for larger pots.
Space for plants is a problem in this small house.
In Wyoming I had many large windows, but toxic water.  Here in Kentucky our water quality is good but space for indoor plants is minimal [and such as there is, invaded by cats!] 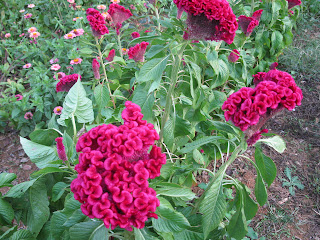 My Amish neighbor Delila grew a  garden row of the brilliant cockscomb [celosia.]
I brought home several of the flowerheads last evening and laid them on the porch to dry.
As I worked there today I noticed a pair of hummingbirds zooming close--I think they were attracted by the bright flowers.
I made the hummers a fresh batch of sugar syrup for their feeder.
Then, with the porch swept, two lavender seedlings set out at the edge of the herb garden, and
newly potted plants in a tidy row, it was time to sit with a mug of green tea.
If only I could learn the gentle art of sitting still--without a renewable list of "things to do"whirling through my mind!
Posted by Morning's Minion at 10:28 PM