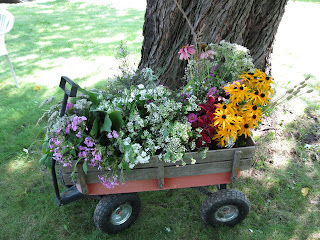 My middle sister, wearing red wellies,
scavanged through the edges of her dooryard and into the meadows to collect these end of summer bouquets which she placed in plastic pails of water. The arrangement graced the outdoor gathering of food and friends which took place after our Dad's memorial service. Some of the individual blooms had suffered from the recent rains, but in such colorful bunches that didn't detract from their beauty. 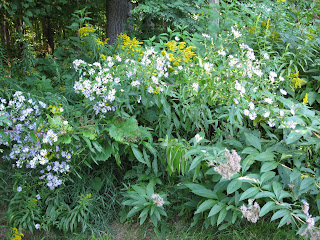 Boneset, frost asters and goldenrod leaning from the shade into the edge of the yard at my younger sister's home where we stayed. 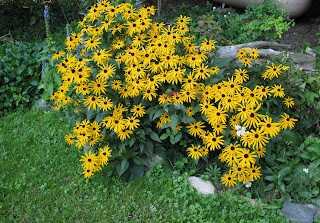 Rudbeckia, with some going to seed bluebells and a sprig or two of bee balm. 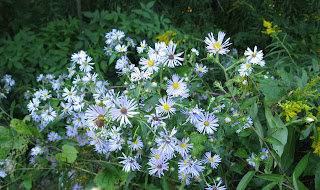 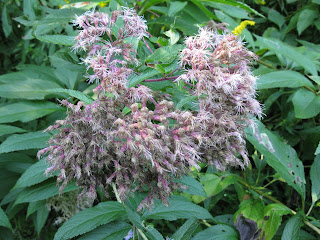 This was intended to be a rather easy posting, an opportunity to share these photos taken in Vermont. Joe Pye weed is one of my favorite late summer wildlings and a relative of boneset which often grows near it in a moist edge of the meadow setting. When I lived in New England I picked all these late flowers at peak of bloom, bringing them home in huge untidy armloads and plunking them, waterless, into a large crock so that they would dry and provide an interesting cloud of furry seed heads. Inevitably they began to shed all over the floor, the cats swatted at them and they had to be tossed out.
I wanted to include a blurb about the folklore of Joe Pye--the person and the plant, eupatorium purpureum. I found several descriptions, ranging from scholarly to lyrical, on the web. I then remembered a book I purchased in the mid 1970's: Old Time Herbs for Northern Gardens by Minnie Kamm. I can see the cover of that book in my mind's eye, haven't had it in my hands for a while and don't even know if Joe Pye weed is included within its pages.
Warning: the rest of this post could probably be classified as a "rant!"
Our frequent moves of the past few years [into the lovely houses my husband builds] have meant endless sorting and shifting of my pack-rat collection of "stuff." Many of these items have found a temporary [three years now!] residence in a storage shed existing on the property. A former owner cleverly built shelves in one area and some of my many books have been settled there while others remain in large, now flimsy, boxes. I periodically get a bee in my bonnet and stride down to the shed where I spend an hour heaving boxes, bins, small chests and other oddments into teetering piles while I search madly for a remembered book. At least once a year J. is struck by an urge to "organize" the shed, which he does with all the energy of a strong, muscular male, but with no sense of where I may look for something. [An on-going apprehension is that someday I shall expire, alone in the shed, beneath a topple of cartons, spilled books and over-turned trunks!]
Today I squeezed behind a queen-sized bed frame and mattress to get at the book shelves. I moved boxes and crates, fell over two horse saddles, discovered a number of books which are now dumped in "my room." I didn't locate the sought-after book. I did, unwittingly, put my knee into a vanity mirror which some person [who should remain unidentified!] had placed in front of a vintage trunk, filled, not by me, with yet more books! I will have to [eventually] confess the damage to J. who was saving the mirror unit for another house.
Much as I want to have my hands on the herbal, I decided a retreat was in order, so, book-laden, back up through the little meadow, which is alive with rattling and pinging grasshoppers, across the wobbly plank which bridges the irrigation ditch. Those of you who are fellow sufferers of insomnia know too well that the where-abouts of the missing book will now be added to my list of things to ponder in the darkest midnight!
Oh yes, Joe Pye: he was a native American herbalist and healer of early New England who used a decoction of the plant to cure typhus. It also acquired a reputation as useful in the treatment of urinary ailments and gout. The most unique [and maybe the safest] recommendation is to add an infusion of the weed to a small child's bath water to induce peaceful slumbers. Don't let the child drink the bath water!