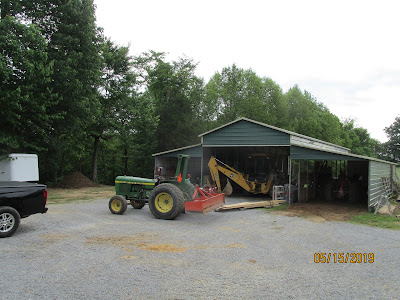 Jim cleared out enough of the barn last fall to get his tractors and some tools under cover.
The right wing of the structure still had the animal stalls and rubble left from the former tenants.
Although he has considered building a garage/workshop, that plan has evidently been postponed, and the alternative was to clean out and refurbish the south side of the barn. 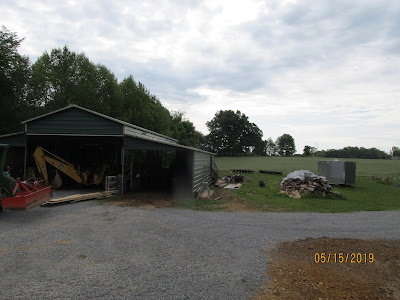 Oddments have been lugged out, some lumber salvaged, a good deal of 'junk' consigned
to the burn pit. With trash and stall partitions removed, layers of ancient bedding and mud have been scraped out in preparation for a load of gravel which is meant to arrive tomorrow. 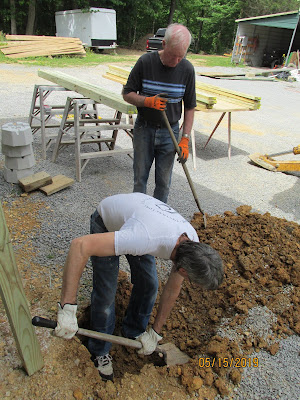 Later in the afternoon work began to remove the temporary steps and construct a small deck at the entry door. 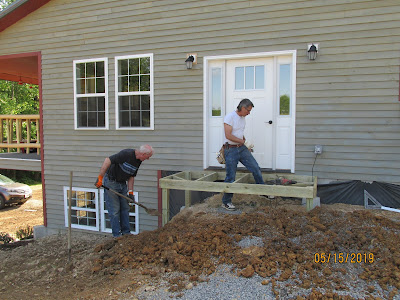 By evening the deck was floored and I gather there will be new steps made.
This may not be the final solution for the main entry; Jim's plans seem to evolve over time. 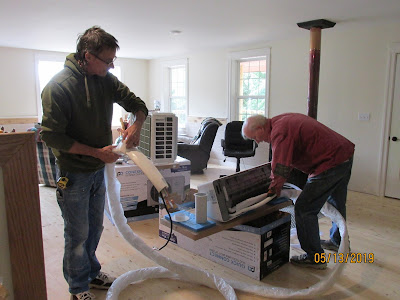 Monday was the day of installing a combination heat and A/C unit which is referred to as a mini-split.  My only contribution to this effort was to straddle a step ladder at the back of the house and catch lengths of heavy wiring cable as it was pushed through the exterior wall.
Cool mornings have given Jim the opportunity to try out the heat, then enjoy the cooling system after working outside in the sun. 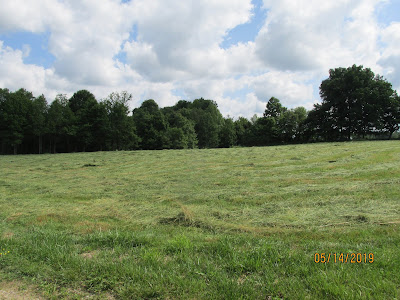 Late on Monday David Beachy trundled in with his tractor and mowing machine to cut the hay in our meadow. His younger brother, Mark loves to 'make hay' so he was delegated to return on Tuesday to 'turn' the swaths of drying grass with the crimper/tedder.  David followed in the farm truck to oversee that all went well.
Tagging along with his older brothers was the youngest boy, Mahlon.
I was outside when this entourage arrived, considering whether the ground was dry enough to pick stones and sod out of the space which Jim had tilled up to extend my flower garden.
'I'll help you,' offered Mahlon.
He chatted companionably as we worked, picking rocks and clattering them into a bucket to be emptied along the edge of the ravine.
Leaning back on his heels as the tractor swept past us in the meadow, he declared,
'Fresh cut hay is the best smell of all!'
By the time Mark finished raking the hay, Mahlon and I had cleared the flower bed ready to be smoothed and planted. 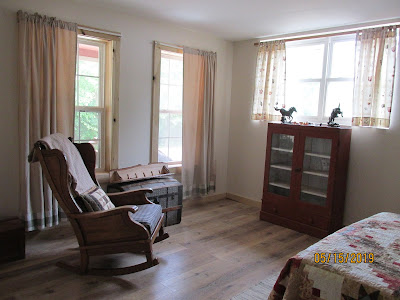 The large downstairs bedroom was finished last week in time for a visit from Jim's cousin.
The closet rail and shelves are not in place, and curtains hastily unearthed from a storage bin were hung over windows that are still dusty. 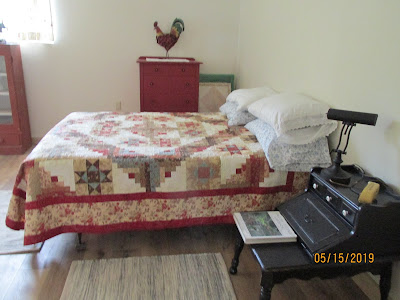 Eventually a king size bed will be set up, and furniture rearranged, proper curtains sorted.
[And the windows washed!] 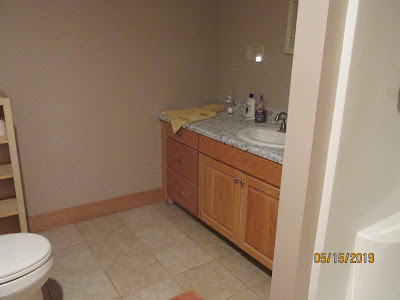 The downstairs bath is finished.
I tried out the new shower this morning. 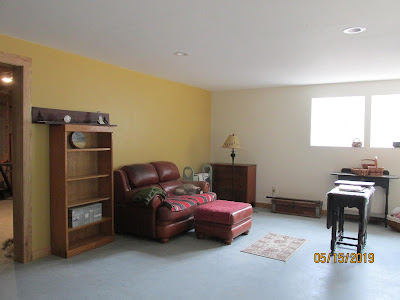 The downstairs living area is likewise finished; Again, furniture hasn't been allocated to proper places, merely brought in from the storage trailer and placed here and there.
Note the cat enjoying the sofa! 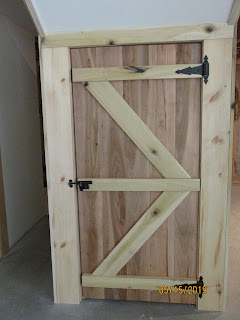 Jim constructed this handsome door. It is worthy of the entrance to someplace rather important:
a wine cellar--an underground tunnel, a hiding place for treasure [?]

In reality, behind the door is the storage space beneath the stairs.  It has been crammed with loaded boxes and bins which I must, at some point, haul out, sort and deal with the contents. 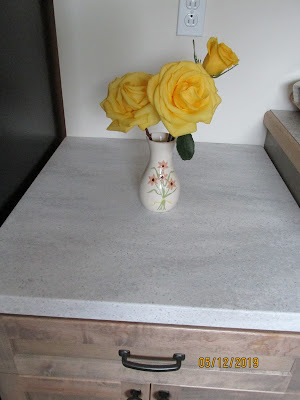 SIL Matt created this Corian top for the lowered kitchen counter where I knead bread or roll out pastry.  Early on I considered having all the counter work tops made with Corian, but decided it was too pricey. Instead they are made from a high-end laminate.  Matt found a remnant of Corian left from another job--just enough for my work top. 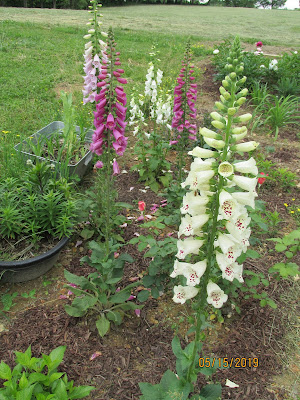 While the men have accomplished wonders, I often feel that I don't contribute much to this house-building process.
I have painted when asked, stained siding; last week I poly-sealed the wood for the staircase and trim.
I keep up with basic housework, laundry, prepare rather mundane meals that can be served whenever the men can take a break.
I hem curtains, rummage through storage boxes, run errands.
I have set out the second little magnolia tree and the lilacs which were a Mother's Day gift.
I have not answered letters and emails, nor tidied my desk.
Sometimes I wonder if I will remember how to 'keep house' or establish some sort of schedule when we are finally finished, unpacked, rooms set to rights. 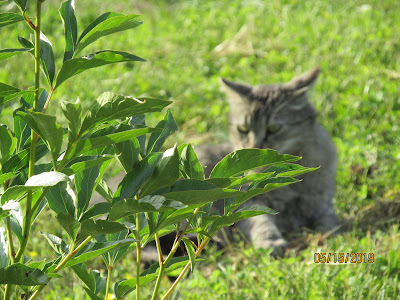 Meanwhile, I escape to my small garden.
This evening I weeded peacefully, watched by faithful Willis. I knelt with my slender pointy trowel, loosening the earth around small and sturdy coneflowers. The weeds lifted easily.  I set out phlox--a white variety new to me called 'Peacock.'
I found larger pots for a new rosemary, 'Huntington,' and for a lavender, 'Big Blue.'
Tomorrow I intend to sow seeds of foxglove and lady's mantle and a pale prairie coneflower.
Perhaps I will make another visit to the garden nursery! 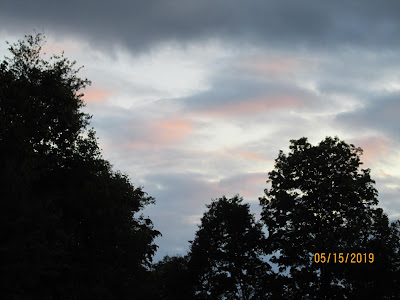 Evening skies were paling to shades of mauve-grey when I came inside.  How strange to think that in little more than a month we will reach mid-summer!