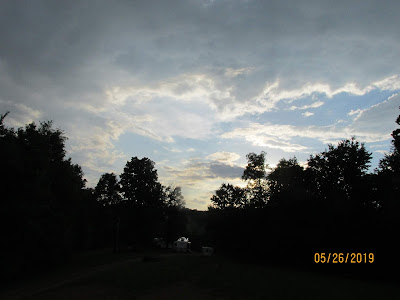 Much needed rain moved in late on Sunday, a brief pounding of water which subsided to a more moderate pattering before the storm moved past leaving a shimmering and cooler evening.
The ground could have used a gentle overnight soaking, but the shower has freshened the landscape. 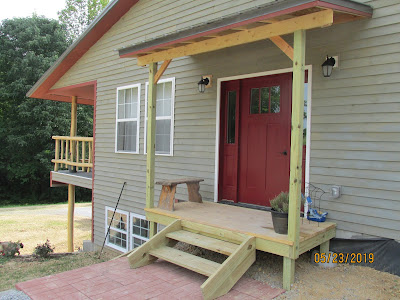 The main entry has been finished, the door painted [by Howard] and the space begged for the embellishment of plants. 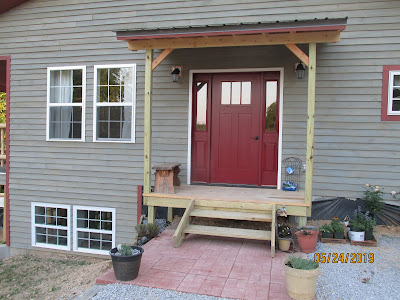 I learned that my favorite garden nursery was having a sale on Friday, so off I went along the narrow winding roads.
Bedding plants and container plants had been sold off since I was there at the beginning of the week, but I was able to gather what I needed.
Many of the container plants are colorful and rather short-lived things with which I'm not too familiar.  They look stunning for awhile spilling from hanging baskets or tubs, but tend to get bedraggled by the end of summer.
I'm happier spending my money on plants that will winter over either in the house or in situ. 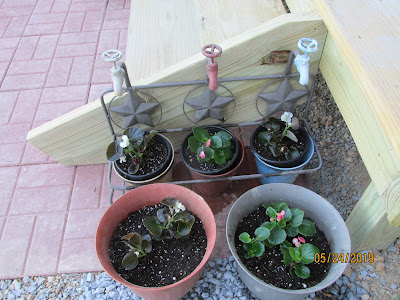 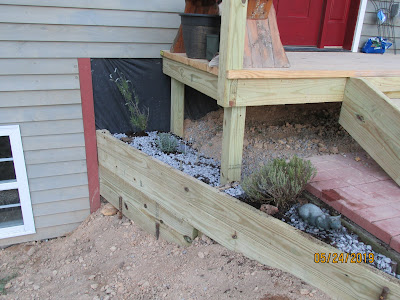 I tucked my big thyme plant into the tiny space at the edge of the walk way and two lavenders closer to the house.  This is experimental; will they thrive there? 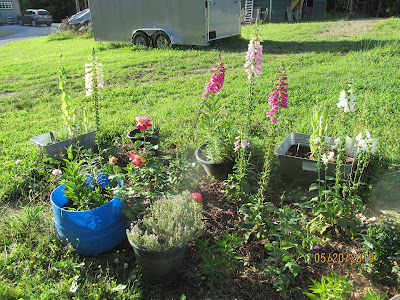 Peonies are long since past their bloom, the foxgloves are leggy.  I plan to harvest seeds before I cut them back in hope of a later blooming. 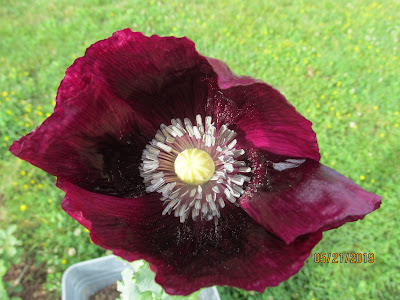 Poppies grew alongside the porch at the farmhouse and some of the seeds fell into the containers planted to dwarf daylilies.
I'm pleased to have these [Lauren's Grape] and will save seeds. 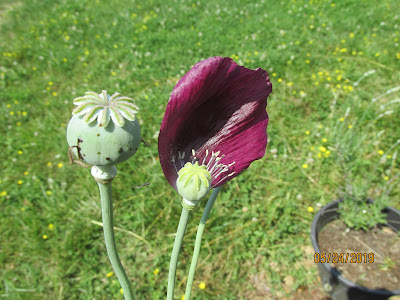 Poppies that are fresh in the morning fade as the day grows hot.
The petals fall and lie on the grass like wrinkled taffeta. 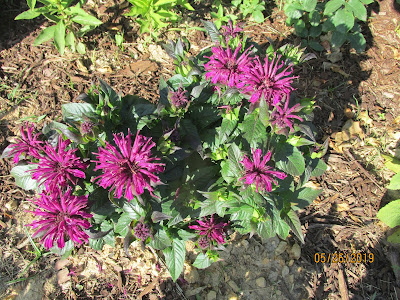 Bee balm has come into bloom and has attracted clusters of bumble bees. 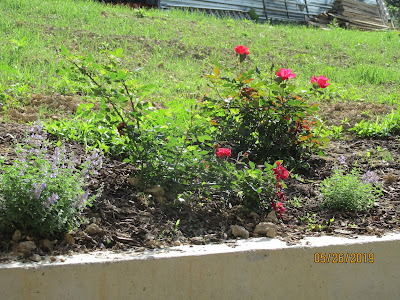 Weeds have popped up behind the roses on the retaining wall. The newly seeded grass is showing a green veil, but the weeds have grown far more robustly.
I dug out some of the weeds before the rain when the soil was hard and dry. I moved daylilies [wintered in containers] into the area between the wall and the 'Jane' magnolia. 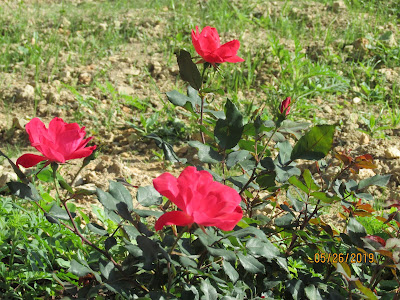 The knockout roses [birthday gift from Howard and Dawn] were pruned back when I set them out. There is healthy new growth and emerging bloom. 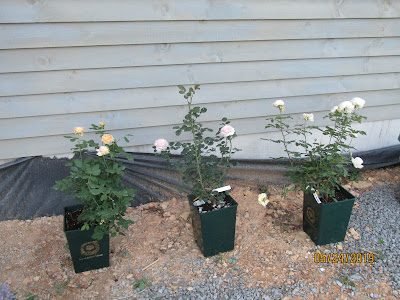 David Austin roses were on sale and three came home with me. The photo doesn't do justice to the colors.  One is apricot in color, one pale yellow and the other a creamy pink.  I hoped to buy one in a darker rose shade, but was concerned that those were showing mildewed leaves and straggling branches.  The plants at the nursery are watered by hand with a wand attached to a hose, the water falling from overhead--efficient, but rough on anything prone to mildew.
These roses will become the foundation of the landscaping on the west retaining wall.

I garden with determination, frustrated that I can't 'keep at it' as in decades past.
I am impatient with aching knees and shoulders!
I hope that 'maintenance' will be physically less demanding than the work of establishing new plantings.
Meanwhile, I totter off to bed earlier than usual or fall asleep at my desk!