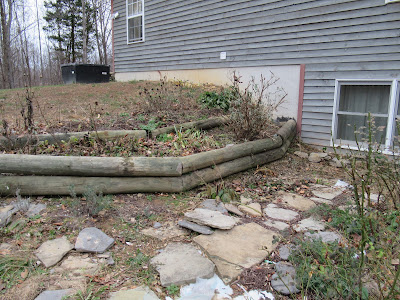 The west wildflower garden, so-called, after the hasty pruning I managed during the afternoon of 29 November.
The day began with sunshine, then the sky became grey and the wind picked up.
I nearly despair of finishing this project. The photo shows where I started to take up and rework the stone path in early summer, an effort curtailed when my back rebelled against heaving rocks. The smaller slabs of creek rock aren't an issue--the large flat ones that comprise most of the walk are another matter.
I still have notions of getting out on mild winter afternoons and accomplishing a bit more, but possibly I am over-optimistic. 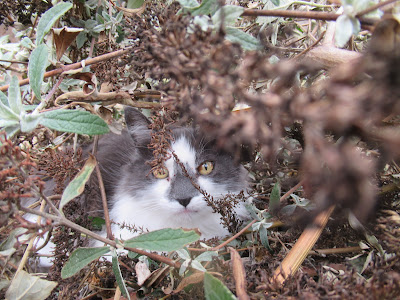 I first tackled the wildly overgrown butterfly bush, tossing clipped branches onto the ground; I trundled in the old wheelbarrow as a sensible alternative to picking up heaps of trimmings. I was ready to wheel off a towering load to dump at the edge of the south ravine when I realized Nellie-cat had burrowed his way into the heap of cuttings and made himself comfortable. 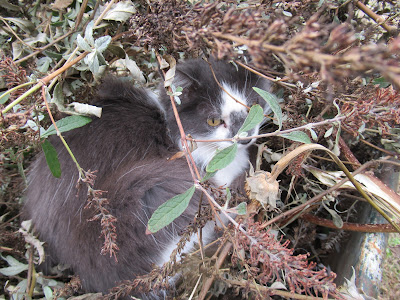 It took a bit of coaxing before Nellie was convinced to leave his brushy hide-out. 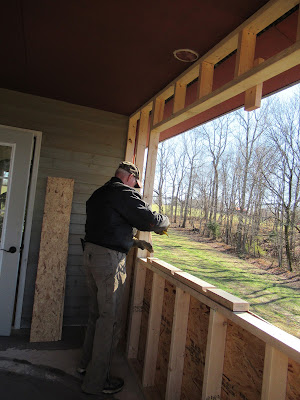 November 30th was sunny. J. and grandson D. worked on the porch enclosure while I drove to shop in the South Fork area. I stopped at Discount Market, Misty Mountain Mercantile, Sunny Valley Salvage Foods, and then chugged up the perilously winding steep road to The Quilters' Trunk.
Nearly all the small shops and businesses in South Fork are owned by Mennonite and Amish of various persuasions. I enjoy the scenery--small farms, greenhouses, clotheslines pegged full of 'plain' clothing.
I drive slowly, ready to overtake an Amish buggy, school children on bicycles, a lumbering iron-wheeled farm tractor. I slow to a mere crawl hugging the verge when an over-laden log truck bears down 'taking its half from the middle of the road.' 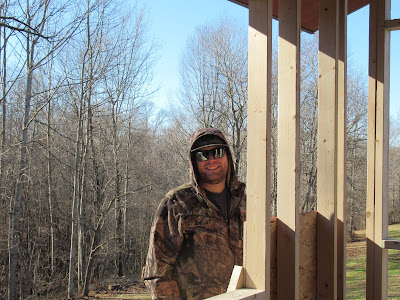 D. perched on a ladder. 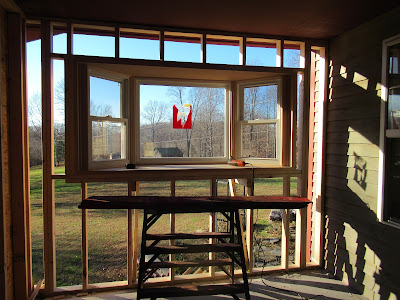 When I returned from my shopping expedition the bay window had been hoisted into place. 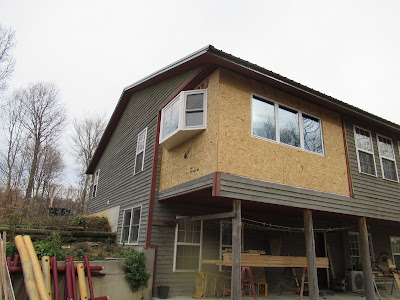 December has come in with persistently gloomy weather: dark, but with a humid chill.
Over several days the porch room was closed in.
Siding and matching stain have been collected from the lumber yard. 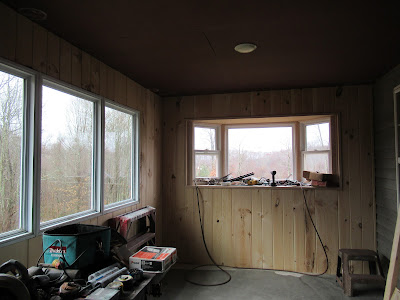 The grey siding which covered the two formerly exterior walls will remain; the new walls have been clad in tongue and groove pine. J. suggests finishing the pine with a clear poly sealer. Knowing the tendency of pine to 'yellow' with time I've proposed a transparent white stain. The builder's decision has not been announced. No floor covering has been chosen. The east porch has prefinished manufactured wood-look flooring, a possible choice for this area. 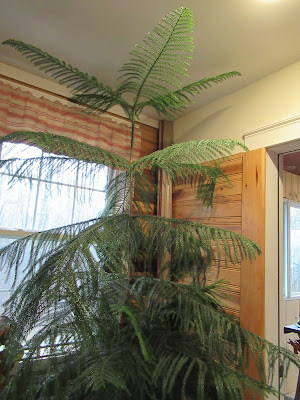 My lanky Norfolk Pine has managed to take over a corner of the sunroom between the east and west porches. The topmost branches were brushing the ceiling. The tree was much in the way of tools and lumber being carried through the door to the new room on the right. Dragged across the floor and parked for ten days against the far wall, the tree leaned tipsily toward the light. 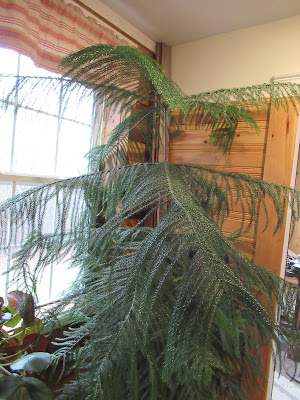 This morning I enlisted J. to haul the potted tree back to its usual corner; I then clambered onto a chair and ruthlessly clipped off the top set of fronds.
Whether or not that was a good thing to do remains to be seen. 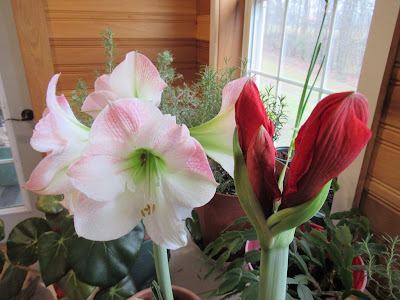 My amaryllis have been unbothered by the commotion around them and have bloomed in spite of the sun's disappearance. 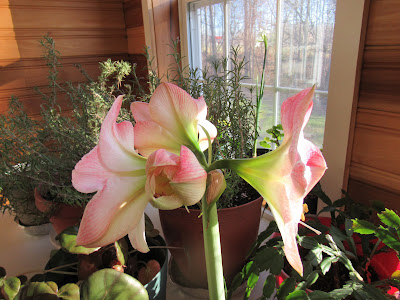 I wish the duration of bloom was longer.
I considered buying two more when I was in Tractor Supply on Monday, but their displayed bulbs are in sad state, the stalks growing crazily out of the cartons. 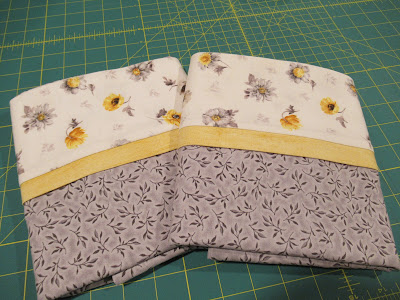 My projects are not as exciting as the renovation of a porch.
My visit to the quilt shop was to choose fabric for a set of cuffed pillowcases I decided to make as a gift for a friend.
[It was strong-minded of me not to succumb to any other fabric purchase while there!]
I made this type of pillowcase by the dozens when I worked at Wyoming Quilts and have made many more as gifts.
In the several years since I made the last pair I developed a 'mental block' regarding the layering of the fabrics.  Annoyed with myself I found instructions online, stared at them, feeling cross, until the method 'rebooted' into my brain.
Feeling belatedly pleased with myself I made a second set to match the batik quilt created for Dawn and Howard; I didn't take a photo of those, and they have gone home with Dawn. 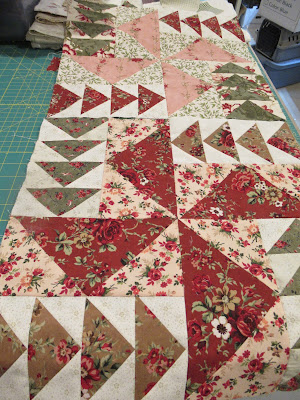 On evenings when I can persuade myself that I don't need to codge up in a corner to read I trudge downstairs and work on quilt blocks.
The large 'Flying Geese' units which create the center pinwheel are fairly quick to make using the 'tool.'
Each block requires four sets of the smaller 'goslings'--a more fiddly process. 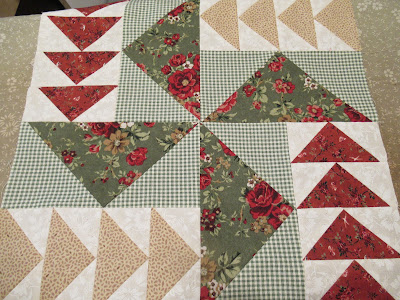 Rummaging out chunks of fabric as possibilities I was initially skeptical of including the green check.
This has become a favorite of the blocks I've finished.
No time for sewing this week. 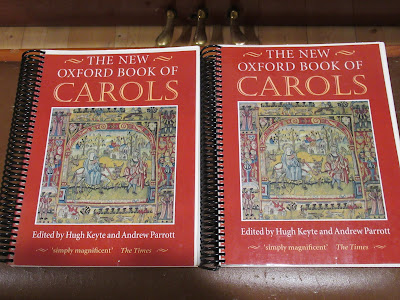 It is my scheduled turn as pianist for church; since I am lazy about practicing regularly, I've been hauling out folders of Christmas music as well as happily floundering through The Oxford Book of Carols.
Many years ago I borrowed from a library [where?] an older copy of the Oxford Book; I hoped that I could locate the same, but never found it in my usual sources for used books.
I was surprised when this new edition, divided into two spiral bound volumes, was offered on ebay at $48.  I offered $35 and was accepted.
I've discovered several old melodies previously heard on CD's--songs with plaintive minor keys and delicate harmonies.
My fingers are not as flexible as in former years [practice might help?] and I'm hoping that friend Ruben will be there with his flute. Ruben's lovely improvisations do much to improve my efforts.
I realize that I start each week with high-minded goals of accomplishment. As the days spin out with routine chores and duties, the unexpected errands or interruptions, the times when a nearly sleepless night leaves me stupid and blundering--each week I come up short of my intended goals. The 'leftover' projects must either be abandoned, postponed or tagged onto the new list.
I wonder if this happens for most of us, some of the time? Most of the time?
Or--sad thought--is it an inevitable affliction of old age?
Que sera, sera!
Posted by Morning's Minion at 9:19 PM