Celebrating a Birthday--With a Few Complications

The month and year of my father's birth, November, 1916, was never in question.
The family knew the name bestowed on him, Lawrence Gilbert Desjadon; 'Gilbert' in honor of his maternal grandfather, still alive at the time.
I vaguely recall hearing murmurs that perhaps he was not born on the 4th of November, but that was the day always honored.
It wasn't until Larry decided to retire and apply for Social Security benefits that it took the findings of  an attorney and the ruling from probate court to establish who he had always known himself to be.
Larry and my mother, spent their entire lives in the small town in which both were born.
Required to furnish proof of birth, it was a surprise to discover that on his original birth certificate his name was incorrectly recorded.
His date of birth is correct, as are the names of his parents, but he was registered with the first name of his older brother, Clarence, and his own middle name, Gilbert.
Interestingly, the attending physician and informant, L. B. Rowe, M.D. also served as Town Clerk, 1916-1918, and as the recording clerk of the Congregational church in town.
In the lower left corner of this copy is the date in 1978 when Thelma Lilly, who served for decades as Town Clerk, attested that this was a 'true copy' of the original.
Hoping to clear up confusion, Larry requested his baptismal record from the files of the local Catholic Church.
When produced from files updated in 1973, this certificate verified Larry's given name, but changed the date of birth to 2nd November.
The court procedure which followed exasperated the lawyer involved who reported that the local probate judge was bungling attempts to sort the matter.
Eventually Larry received a copy of his corrected and amended birth details along with a letter from the town clerk who competently handled the local filing. 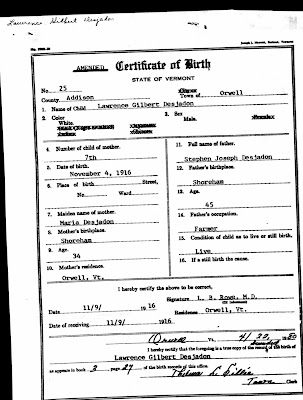 Those interested in family research at any level hope for primary sources to verify personal details.
Clerical errors are made, spaces are left blank on official vital forms meant to record full names and dates, causing endless frustration in later years.
When our son was born in 1964 his first name was listed incorrectly in the Vital Statistics section of our local town report, an error which I quickly had corrected.
For years I have kept copies of the print-out given us with correct details when H. applied for a SS number to begin working at age 16.
[At that time, social security numbers were not assigned at birth.]
Wanting to have a certified copy of the birth cert--the one with the official seal--I applied earlier this year through the state's official record repository, typing details into the online form, printing and sending with a cover letter explaining the long ago error somewhere in the transcription process. Of course I enclosed a check for the fee!
A week later an official envelope arrived--with a certified copy of the incorrect birth certificate.
When contacted, the newly elected clerk in the town of our residence at the time of our son's birth attempted to be helpful, but didn't realize she could go into the state archives and retrieve the correct certificate.
Email contact with the clerk at the county seat location of the hospital where H. was born, payment of another fee and within a week the coveted certificate, stiff parchment paper, embossed seal, was in my mailbox.
We sift through clerical errors, attempting to verify facts known to us.
We bang our heads at the inefficiency of clerks past and present.
Surely the internet, email, fax, create almost instant communication.
Today, 106 years past my father Larry's birth, a search via Newspapers.com turned up the following:
Middlebury Register,
November 10, 1916 Edition
Orwell News
A son was born Saturday, November 4, to Mr. and Mrs. Stephen Desjadon.
Online calendars for November, 1916, display 4th November as Saturday. 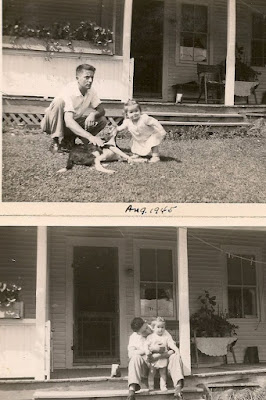 Daddy with me as a 2 year old--my parents created a three room apartment in Grampa Mac's farmhouse for the first years of their marriage. 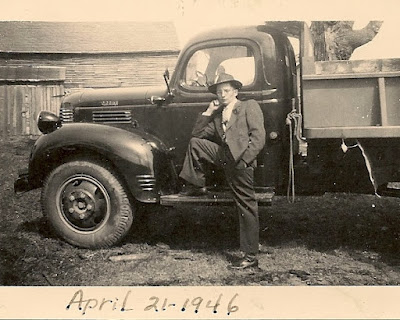 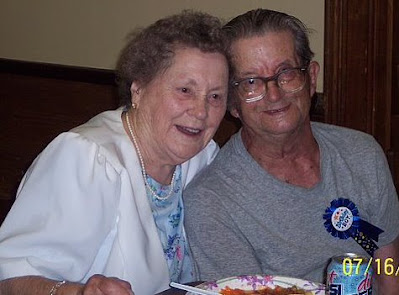 A birthday gathering for Liz and Larry.
Her birthday was in July, his in November.
Last photo of me with my Dad. 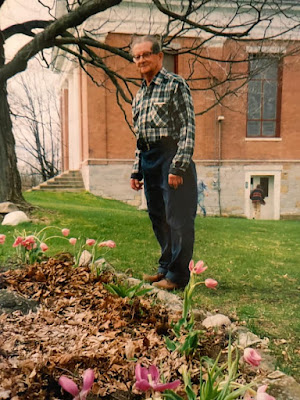 The garden Larry created and kept at church is still tended in his memory.
Posted by Morning's Minion at 7:09 PM