The End of {Another} July 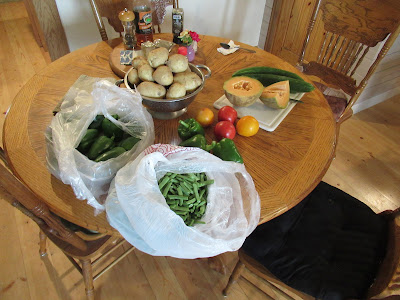 Mornings have been dark during this prolonged spell of almost daily rain. Although still humid, last night's weather included a cool breeze. I left the connecting doors open to the sunroom and east porch [the cats enjoy prowling through the extra space] and raised the bedroom window.
In the predawn gloom a chilly damp wind stirred the curtains, blew across my bed.
In the first weeks after the summer solstice there seems little change in the daylight. The glow of sunset lingers well after 9 p.m. This past week I've suddenly noticed the diminishing hours of light.
I picked one and a half gallons of Roma beans yesterday forenoon, gathered glossy green peppers, hurrying into the house barely ahead of yet another downpour.
The beans have been snipped and cut, tucked into the downstairs fridge to wait for the next picking --likely sometime on Tuesday--to have enough to justify using the pressure canner.
J. made several trips from the garden this morning with produce which he arranged on the table and requested that the peppers and beans be brought out to ad to his photo session. 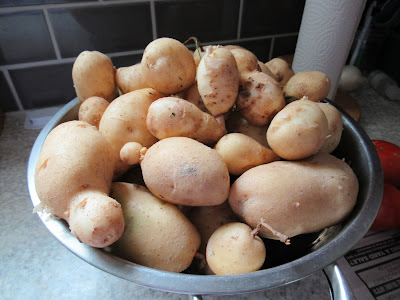 Potatoes not quite as large as some harvests, likely due to the June drought, but the tops are down and with the ground staying soaked they need to be lifted. 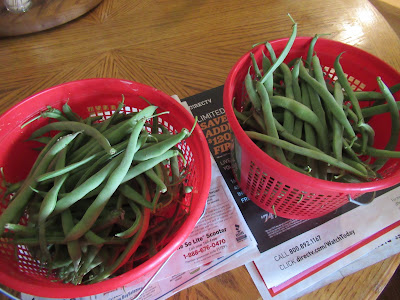 Roma beans, rinsed under the outdoor spigot, ready to cut. 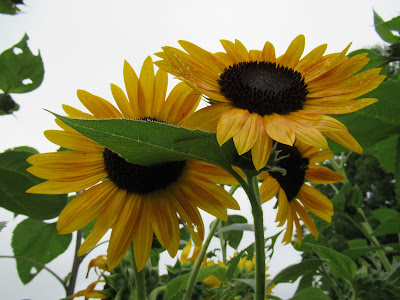 Sunflowers against a grey and foggy sky. 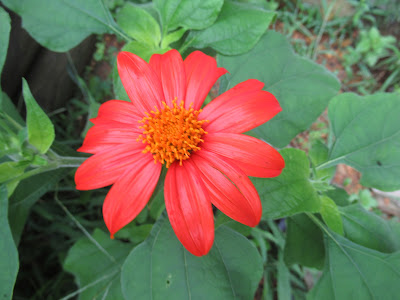 Mexican torch flower.
Included in my spring 2020 seed order from Select Seeds was a free packet of torch flowers. They were unfamiliar, but I started several plants in the greenhouse. Only two made it to transplantable size. I positioned one near the west wall in the wildflower garden under construction. It became a giant thing, leaning out of the raised bed, and in the fall it showered the surrounding area with seeds. I expected to have a raft of torch flower 'babies' appear in 2021. There was not one!
Scrabbling about during mid-June I noted that two plants had appeared amidst a jungle of lemon balm upstarts. I wonder at that dormancy of a year. Several attempts to capture the dainty prairie sage didn't result in a clear photo. The blue is more intense and the flowers have the typical shape of those in the labiatae family. The leaves have an almost acrid scent. 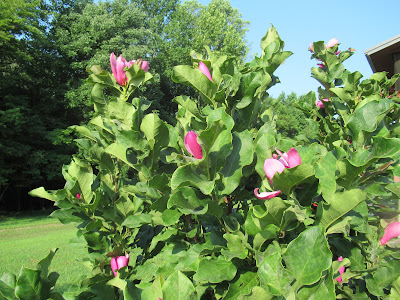 The "Jane" magnolias in the front yard have been inspired by the recent rains.
The resident hummingbirds find them attractive momentary perches during their hectic zooming flights. 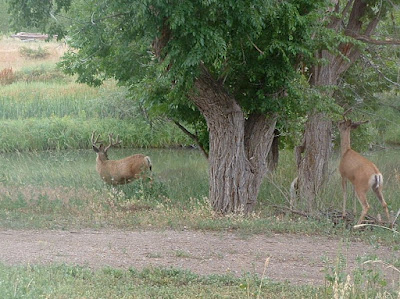 "One Drive" evidently pulls photos from my online storage and presents some daily.
These are some of the Mule Deer who were regular visitors at our last Wyoming property. It was not unusual to open the living room curtains in the morning and find a deer standing just outside the window.
You can see the pond in the background.
The deer were quite fearless, even coming onto the front porch and eating the struggling plants I had set out in tubs. 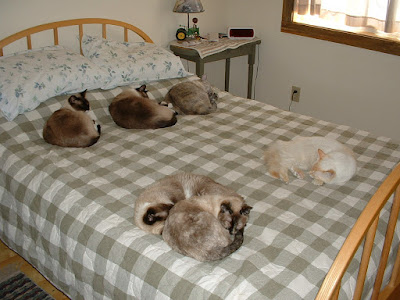 I was also presented with this bed full of dear, now departed cats.
From left to right below the pillows: Raisin, Oscar, Mrs. Beasley.
Snuggled together are Eggnog and Zelda with the short-lived Homer curled by himself.
Raisin and Eggnog lived to move to Kentucky with us.
I spent half an hour today trolling through several years of my archived blog posts. Nothing changes greatly. Some years the drought has come in June as it has this summer; at other times June is a time of rain with the drought occurring through July and August. Seldom are we blessed with a season when rainfall is pleasantly moderated encouraging optimum growth in the garden.
I noted that we have often been frustrated in raising beets; last year we had beets in abundance, this year several successive plantings haven't germinated.
As to flowers, I usually have several large pots overflowing with nasturtiums. This year, a few early blooms from seeds that had over-wintered. Successive plantings this year have given me only a few frail seedlings, none of which have bloomed.
A dozen years of gardening in Kentucky [this is our 13th summer] have proven that the tomatoes are always going to succumb to blight during July.
We soldier on through drought and deluge, either too stubborn or too optimistic to quit gardening.
Posted by Morning's Minion at 10:20 PM