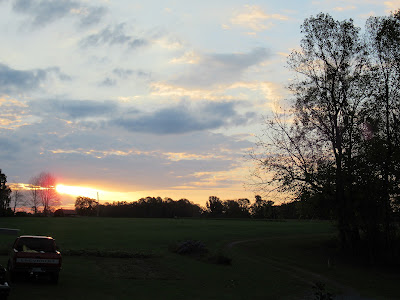 57 F here at 8 a.m. and by mid day the temperature was a sunny and breezy 77 F.
It was the weather I've been waiting for to tackle fall gardening chores. 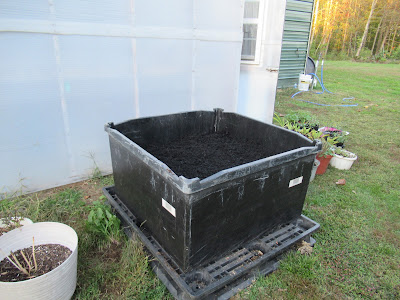 The men of my family have doubtless grown weary of listening to me wail about my need for raised planters. In early summer they constructed one of timbers along the front wall of the house. This held only a small portion of the plants I had optimistically started in the greenhouse before my gardening plans were sidelined by a DVT.
I managed to pot up the seedlings and watered them through a long summer, but have fretted that they need a safe place for the winter.
Howard discovered that a nearby garden nursery was selling off fiberglass planting bins and obligingly took me with him to bring several home. 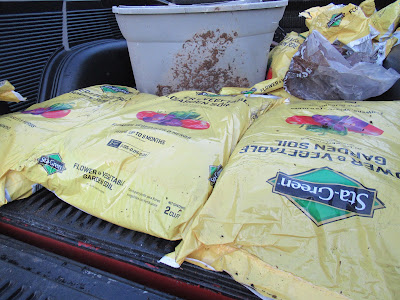 On Thursday Jim [with a certain resignation] agreed to a trip to Lowes where we purchased a dozen bags of garden soil.  Three of the tubs have been filled with bark mulch as a bottom layer for drainage and the bagged soil on top. 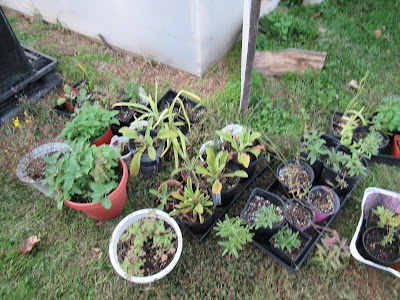 The motley collection of pot-bound plants. 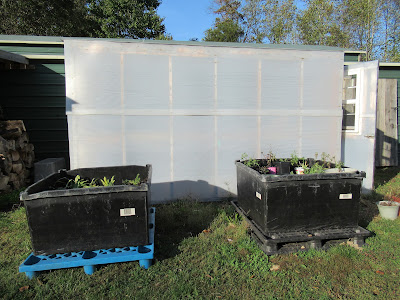 Prior to setting plants into their winter quarters I emptied the tubs and pots which have lined the front walk, dragging the containers into the greenhouse--but not taking time to stack and organize in there.
Greenhouse tidying can be done another day when the weather is less perfect. 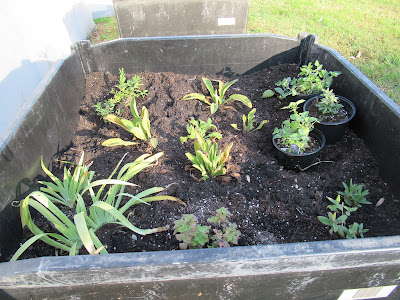 I didn't try for any artistry--plants were plonked in groups--foxglove, blackberry lily, New England asters, clary sage--pots of catnip set along an edge.
I disinterred  dwarf dahlias which summered in galvanized tubs, spread the tubers in a tray in the greenhouse to dry a bit while I search for a good way to keep them over the winter.
I dug up three clumps of phlox from the weedy rough strip where the peonies and daylilies live, pruned back the woody stems and set them into the bin located on the west side of the house.
It will be interesting to note how quickly the cats find all this lovely dirt--the better to dig in! 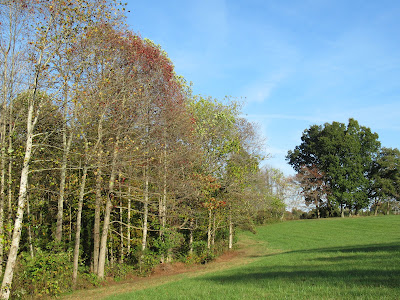 There is more outside work to be done, but I am trying to learn sensible limits--the last half hour of work was weighing heavily on me.
Inside for a restorative shower and clean clothes--a soft pair of shabby jeans and a loose sweatshirt.
I cut a Winesap apple into wedges, added bite-size pieces of Colby cheese, made a mug of tea. A rummage in the fridge turned up a bowl of creamy tapioca pudding made on Friday.
I conveyed all this--along with a book--to the east porch and flopped gratefully into a rocking chair, sighing with pleasure as my aching back settled against a plump cushion.
I was followed by Rosie-the-Kitten who wondered if she might fancy tea or pudding. She draped herself, purring, over my shoulder, whiskers tickling my face.
When she decided I wasn't going to share, she hopped down and began weaving about amongst the pots of rosemary and geranium.
A very tired bumble bee was spending what were likely its last hours in the saucer under a geranium. Rosie discovered it and [of course] began prodding at it.
"No, Rosie," I said, and made shooing motions.
Rosie continued to poke and the bumble bee roused enough to become annoyed.
So much for a leisurely cup of tea.
I isolated the bee underneath a clear plastic bowl and returned to my tea and my book.
Rosie prowled around the container while the bee lay unhappily on its back.
Tea finished I managed to remove the bee to the front garden--where I expect it soon expired in peace. 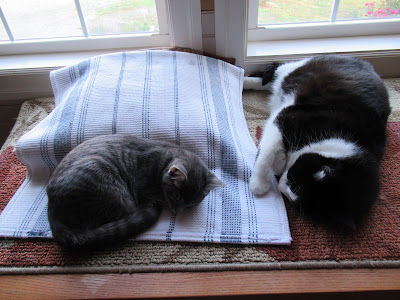 Rosie opted for a nap with Edward in the front windows.
Somewhat revived by my tea break I hoovered up the first onslaught of the Asian lady beetles which are making their annual visitation. A few had squeezed around the screen and were trundling back and forth along my bedroom windowsill.  I hoovered them up, washed the inside of the window, then did the same in J's adjoining room. 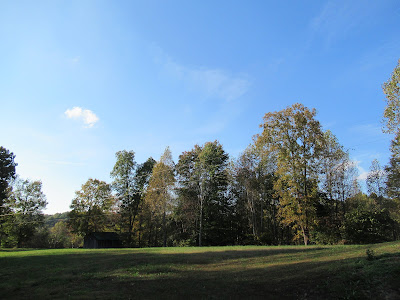 Back outside with my camera to enjoy the late afternoon sun.
Leaves have been drifting down from the trees that line the north ravine--but the landscape still reads strongly green. 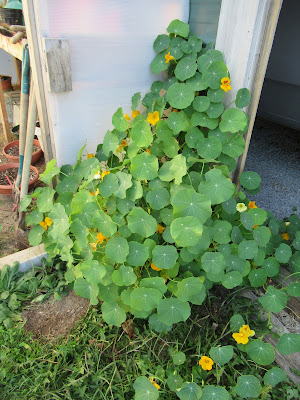 I raise nasturtiums every summer--mostly from the seeds which ripen and fall into the pots from the previous season's flowers. Early in the spring, with the pots still in the greenhouse, I clear away the old stems and poke the seeds into the soil. By July the first growth has gone straggly, but more seeds germinate for a second flush of bloom. Jim moved this large pot into the corner between the greenhouse and his shop so that he could mow. The nasturtiums have flourished there, creating a 'tower' of leaves and blossoms, crawling through the join of the two walls to clamber over the greenhouse floor. 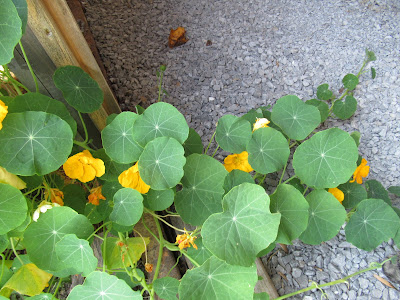 A long trail of nasturtiums have crept into the garage/shop.
Its interesting that this year's crop of blossoms are mostly a brilliant yellow/gold with a few that are milky white. Empress of India with its smaller blue/green leaves and dainty dark red flowers is one of my favorites, so I plan to start a pot of those next spring. 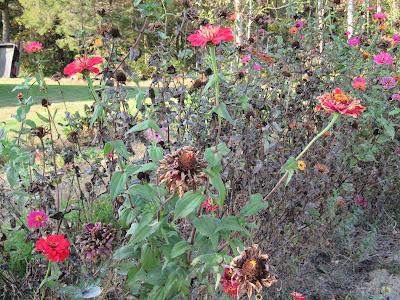 The shabby gone-to-seed row of zinnias. Volunteer plants several inches tall are growing outside the row. 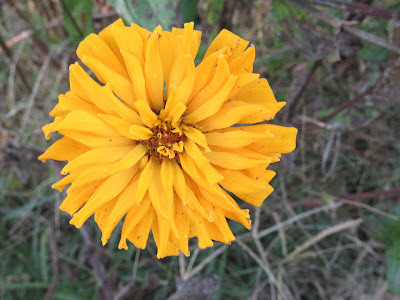 Here and there in the faded ranks, there is a fresh zinnia. 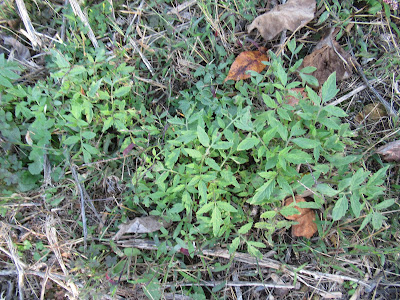 Tomato and cucumber plants have sprouted by the hundreds in the cleared and tilled sections of the garden. 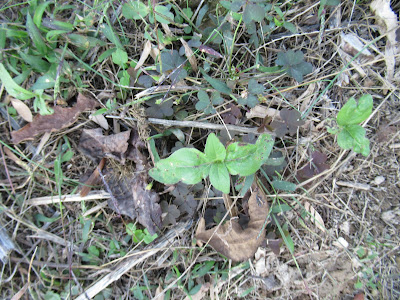 Sunflowers have sprouted.
These volunteers, along with the self-sown runner beans will succumb to the first frost--which can't be too far in the future.
All that energy gone to waste, trying to flourish in the wrong season.
Still, I marvel at the energy of the fallen seeds. 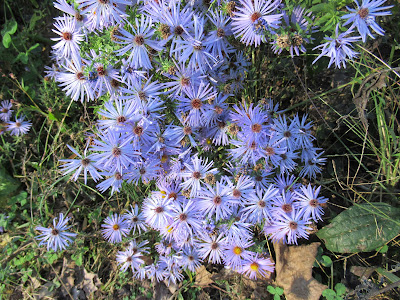 The late flowering New England asters in the weedy rough garden strip [now hardly worthy to be called a garden;] the branches sprawl, some of the flowers are a bit tattered, but still a lovely blanket of color. 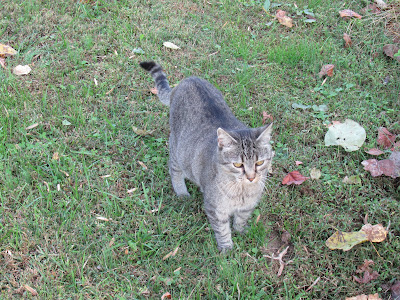 I was attended throughout my labors by the ever-faithful Willis.
He plodded back and forth from doorstep to the tubs, into the greenhouse, eyed the big planters with a bit too much interest.
This has been the 12th summer of Willis--never a house cat, but always a follower and overseer of our doings. We could hardly run the place without him!
Posted by Morning's Minion at 10:11 PM